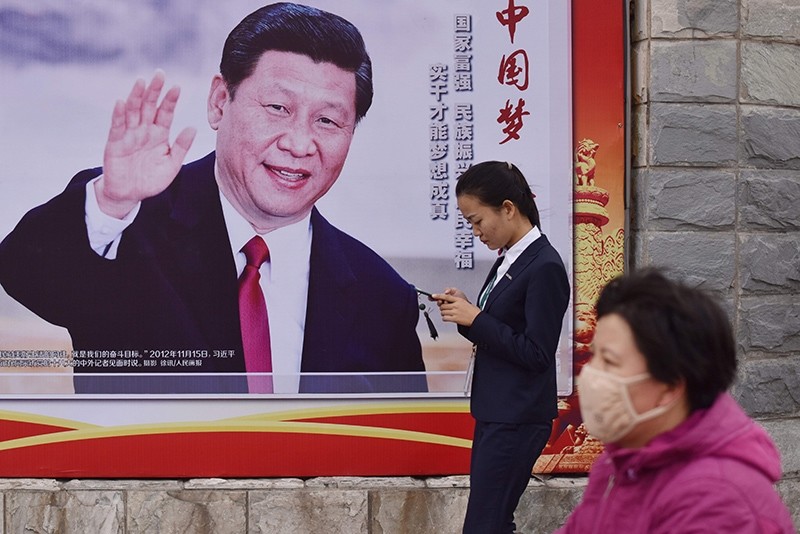 Having bested his rivals, Chinese President Xi Jinping is primed to consolidate his already considerable power as the ruling Communist Party begins its twice-a-decade national congress on Wednesday.

From meetings largely cloaked in secrecy, powerful players will emerge publicly in new roles, and Xi will address the nation to lay out his political and economic vision for the world's second-largest economy over the next five years. Villages will broadcast news of the congress over loudspeakers, a security crackdown has been extended and monitoring of dissidents strengthened.

Xi, who is expected to get a second five-year term as party leader at the gathering, will kick off events with an address indicating that his personal political theory will be entered into the party constitution. The honor was bestowed much later in office for most other leaders.

Congress spokesman Tuo Zhen announced the congress' end date and said it will amend the constitution to embody the "new vision and thinking" over governance presented by the Central Committee with Xi at its "core".

Tuo fell short of saying whether Xi's name would appear in the document, an honor that has only been bestowed to modern China's founder, Mao Zedong, and the father of market reforms, Deng Xiaoping.

Such a proclamation, at this time, would broadcast that Xi, already China's most powerful leader in decades, will continue to dominate Chinese politics for the next five years – and possibly more - with virtually no domestic opposition.

Tuo also said the party would continue structural reforms but ruled out any adoption of a multiparty democratic system.

"Political structural reform is not something that can be achieved overnight. China will not blindly copy or replicate the models of other countries," Tuo told reporters at a news conference to discuss the congress' agenda.

Xi, in his speech, is also expected to recommit the party to achieving the goals of a "moderately well-off society" by 2021 - the 100th anniversary of the party's founding - and even greater national power and prosperity by 2049 - the centenary of the founding of the Communist state.

Those achievements will depend on continued economic growth and the lifting of millions out of poverty, alongside the continued rapid expansion of Chinese military and political power, including its growing ability to dominate the Asia-Pacific region.

The meeting's immediate results, however, will be personnel appointments, rumors about which have swirled for months.

China is run by the party's Politburo Standing Committee, currently a seven-member body led by Xi, with Premier Li Keqiang his No. 2. Its size and composition have varied greatly over the years, although membership is generally restricted to the heads of state and party, the premier, the leader of the rubber-stamp parliament and officials in charge of propaganda, party discipline and other key sectors.

While Xi and Li are expected to stay, the fates of others are determined by loosely defined precedents governing retirement age. Four are expected to depart, while the status of party discipline boss and close Xi ally Wang Qishan appears to be in flux.

If Xi changes the rules or ignores precedents, such as that of the informal retirement age, he could risk a backlash inside the party from those who see respecting such norms as essential for a peaceful transfer of power.

Observers will also be looking for a potential successor to Xi after his traditional second five-year term as party leader. While the nation's presidency is limited to two five-year terms, the office of party general secretary is bound by no such restrictions. Xi, 64, could step aside for a younger leader while maintaining ultimate control from behind the scenes.

Whatever the outcome, most analysts say Xi has largely completed the task of sidelining his competitors in other cliques, including those surrounding his immediate predecessor, Hu Jintao, and former leader Jiang Zemin.

"Xi has been extremely successful in purging political rivals," said Feng Chongyi, an expert on Chinese politics at Sydney's University of Technology. "There will be only one faction left after the 19th congress."

The 2,287 carefully hand-picked delegates to the congress are drawn from 40 constituencies, including the 31 provincial-level administrative districts, the government, the military, state industries and grass-roots organizations representing most of the party's 89 million members.

In a secret process, they will select a roughly 200-member Central Committee, along with more than 150 alternates, from a pool of around 400 candidates. The committee will then pick a 25-member Politburo and the elite Politburo Standing Committee, led by the general secretary. The makeup of the top body will only be known at the close of the weeklong meeting when its members reveal themselves on stage in front of journalists, according to past practice.

This year's congress is expected to usher in many new faces. Cheng Li, who studies Chinese politics at the Brookings Institution think tank in Washington, puts the turnover rate in the Central Committee at 70 percent, the highest since the peak of Mao's chaotic Cultural Revolution in 1969.

However, women continue to be underrepresented in the top bodies, pointing to the abiding highly masculine tone of Chinese politics. No woman has ever served on the Politburo Standing Committee and only two currently are on the Politburo. Just 10 are on the Central Committee, comprising 4.9 percent of members.

Extraordinary security measures are being imposed for the congress, and not just near the gathering. Already heavily restricted, access to foreign websites, social media platforms and messaging programs such as WhatsApp has been tightened and dissidents placed under increased scrutiny.

In Beijing, thousands of deputized citizens patrol the streets, and knife, fireworks and chemical sales have been suspended. In the restive far-northwestern region of Xinjiang, police have demanded that owners of any knives longer than 10 centimeters (4 inches) have them embossed with a QR code for identification.

And while many Chinese may seem blase, news about the congress is impossible to avoid.

Villages are revving up decades-old public address systems to broadcast developments. They aim to cut through "noise from the internet that left some beneficial policies misunderstood," the official Xinhua News Agency reported.

The speaker systems, Xinhua says, can "bring the CPC and Chinese people together better."