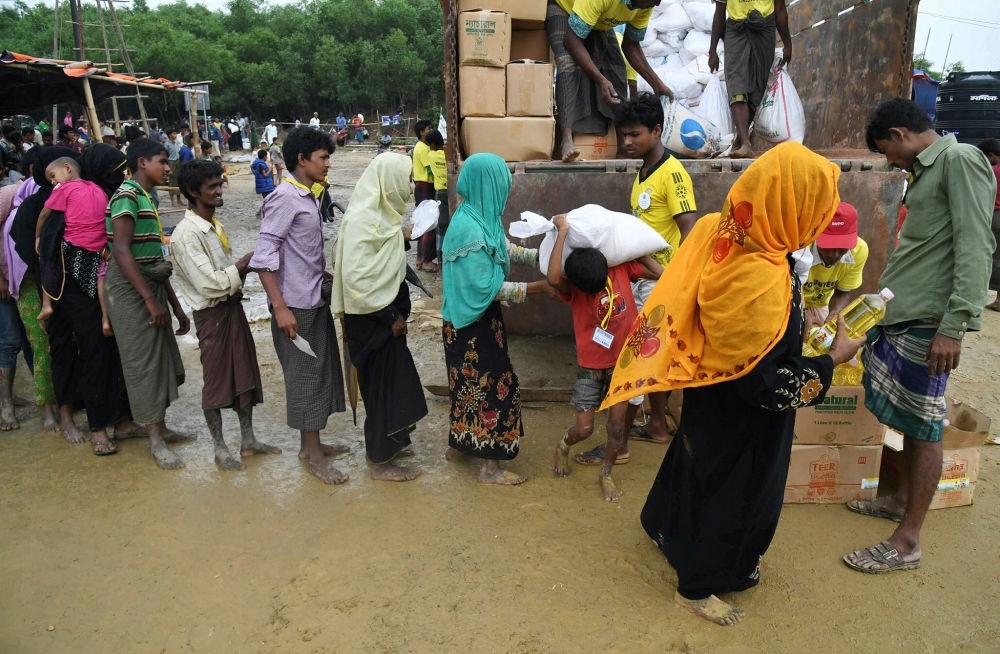 Rohingya refugees wait to collect relief aid at the Thainkhali refugee camp in the Bangladeshi district of Ukhia, Nov. 1.
by Compiled from Wire Services Nov 04, 2017 12:00 am

As the Rohingya exodus continues, poor sanitation and lack of hygiene in refugee camps has sparked growing fears over the spread of cholera and other highly contagious diseases

The threat of cholera is like a "ticking bomb" for the hundreds of thousands of Rohingya Muslims who have flooded into Bangladesh in recent weeks, the Red Cross chief warned.

"We have every reason to fear that we can get into a situation that can lead to cholera outbreaks," Elhadj As Sy, head of the International Federation of Red Cross and Red Crescent Societies (IFRC), told AFP in an interview this week. "We are definitely sitting on a ticking bomb," he warned.

Poor and overpopulated, Bangladesh has struggled to cope with the mass influx of people, more than half of them children, and many of whom arrive exhausted and malnourished after days and even weeks of travel.

Sy, who spent three days in Cox's Bazar last week, said the conditions there were "difficult to describe" and "very heartbreaking."

One of the biggest concerns is the poor sanitation and lack of hygiene facilities that has sparked growing fears over the emergence of cholera, which spreads through dirty water and can kill if untreated.

The IFRC, which last month opened a field hospital near the camps, has treated numerous patients for acute diarrhea.

At the same time, the U.N. began a massive vaccination campaign in a bid to avoid a cholera epidemic, but while no cases have appeared so far, Sy warned unhygienic conditions could see the disease spread.

"Much more must be done so that we don't get into that situation that we are all fearing today."

Cholera is not the only threat. Sy said a surge in measles cases among children in the camps was also "quite worrisome," pointing out that five new cases were detected during a single day of his visit.

So far, 67 cases of the highly contagious virus have been registered, but Bangladeshi authorities insist the situation is under control, with a mass-vaccination campaign underway.

The IFRC field hospital has also treated thousands of people for a range of other ailments, including injuries suffered in Myanmar, amid widespread accounts of murder, rape and arson, and along the treacherous route to Bangladesh.

In one of the worst refugee crises in decades, more than 600,000 Rohingya Muslims have crammed into makeshift camps in Bangladesh's Cox's Bazar district since fleeing an army crackdown in Myanmar's Rakhine state, which began Aug. 25.

Amnesty International's report presents evidence that the Myanmar military has killed at least hundreds of Rohingya women, men, and children, raped and perpetrated other forms of sexual violence on Rohingya women and girls, and carried out organized, targeted burning of entire Rohingya villages. Myanmar rejects accusations of ethnic cleansing and has labeled the Rohingya militants who launched the attacks as terrorists. U.N. aid agencies have not had access to the shrinking Rohingya population in Rakhine state and the U.N. says Rohingya there now face a "desperate choice whether to stay or go," not only due to the violence but also humanitarian needs.