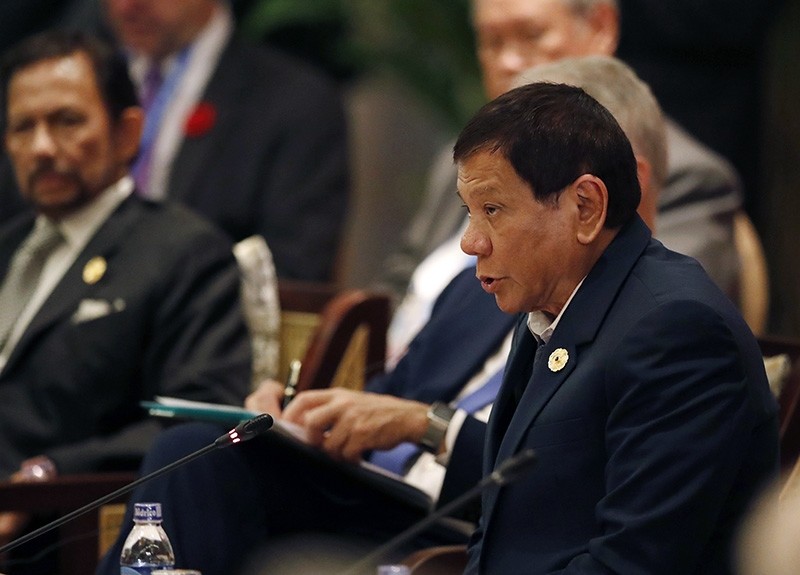 Philippines' President Rodrigo Duterte speaks next to Brunei's Sultan Hassanal Bolkiah during the APEC-ASEAN dialogue, on the sidelines of the 25th Asia-Pacific Economic Cooperation summit (APEC), in Danang, Vietnam. (EPA Photo)
by Nov 10, 2017 12:00 am

Rodrigo Duterte's claim that he stabbed a person to death as a teenager was probably a joke, his spokesman said Friday. But the Philippine president appeared to be dead serious.

Duterte was speaking to the Filipino community in the city of Da Nang, Vietnam, on Thursday evening when he said he stabbed a person to death when he was 16 years old.

He told them that he was prepared to go to jail and kill for his countrymen.

"Jail? I was in and out of jail as a teenager," Duterte said. "At the age of 16, I already killed someone. A real person, in a rumble, I stabbed the person."

"I was just 16 years old then, and it was just over a look," he added, referring to what caused him to stab the person. "How much more now that I'm president?"

Presidential spokesman Harry Roque said Friday the story could have been a joke.

"I think it was in jest," he said. "The president uses colorful language when (he is with) Pinoys (Filipinos) overseas."

It was not the first time that Duterte talked about killing a person.

In December 2016, he said he used to shoot suspected criminals himself to show police officers that they can do it.

In 2015, Duterte said he killed at least three men suspected of kidnapping and rape in the southern city of Davao, where he was mayor for more than 20 years before becoming president.