11 Pacific Rim countries agree to move ahead with trade pact without U.S. 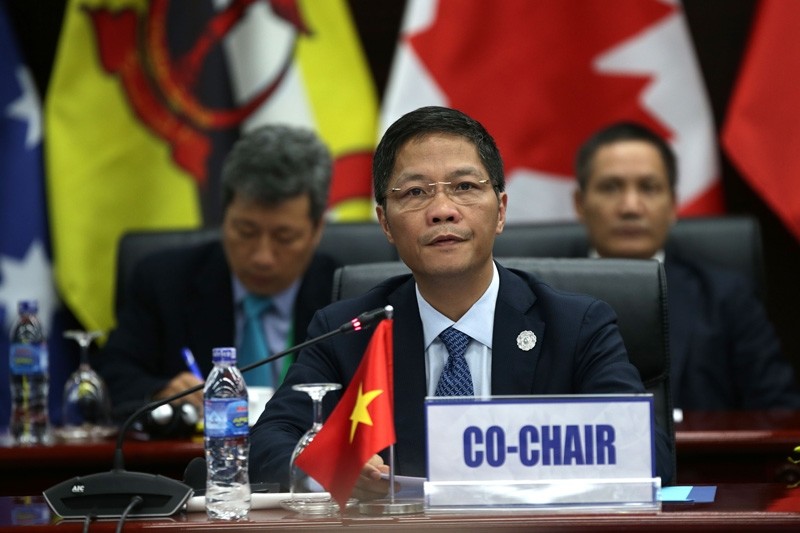 Countries in the Trans Pacific Partnership (TPP) have reached an agreement to push ahead with the trade pact without the United States, by suspending some provisions from the original deal, Vietnamese and Japanese officials said on Saturday.

"We have reached an agreement on a number of fundamental parts," Vietnam's trade minister, Tran Tuan Anh, told reporters in the coastal resort city of Danang, on the sidelines of the Asia-Pacific Economic Cooperation forum. But more work must be done before leaders of the countries involved can endorse the plan, said Anh and his Japanese counterpart, Toshimitsu Motegi.

The 11 counties remaining in the trade pact rejected by Trump in January have been working to revise the deal to allow them to proceed without U.S. involvement. That involved a difficult balance between maintaining high standards and pragmatism, Motegi said.

"Through a pragmatic response of the officials involved we could come to an agreement," Motegi said. He said it was clear there would be a need for further changes but that differences had been narrowed down.

"The substance is something all the TPP countries can agree on," said Motegi. "This will send a very strong message to the U.S. and the other countries in the region."

The talks resulted in an even longer name for the trade pact than originally devised. It is now the Comprehensive and Progressive Agreement for Trans-Pacific Partnership.

The announcement of a basic agreement was delayed by last-minute discord that prevented the TPP leaders from endorsing the plan when Canadian Prime Minister Justin Trudeau did not join other leaders who gathered Friday to endorse an agreement in principle on pressing ahead without the U.S.

In the end, Canada's Minister for International Commerce Francois-P Champagne said in a tweet Saturday that "after lots of work, big progress on the 'Comprehensive and Progressive Trans-Pacific Partnership.'"

Trudeau had said days earlier that Canada would not be rushed into an agreement.

Despite enthusiasm for sticking with the plan following the U.S. withdrawal, criticism over various issues persists. Detractors of the TPP say it favors corporate interests over labor and other rights. Trudeau said days before arriving in Danang that he would not be rushed into signing an agreement that did not suit Canada's interests.

Aspects of the trade pact have also raised hackles over a requirement that companies be allowed to sue governments for lack of enforcement of related laws.

The proposed basic agreement reached in Danang said that the ministers maintained "the high standards, overall balance and integrity of the TPP while ensuring the commercial and other interests of all participants and preserving our inherent right to regulate, including the flexibility of the parties to set legislative and regulatory priorities."

The U.S., the biggest TPP economy, had been one of its most assertive supporters before Trump took office. Trump has said he prefers country-to-country deals and is seeking to renegotiate several major trade agreements to, as he says, "put America first."

Trump reiterated his markedly different stance on trade before the 21-member APEC summit convened late Friday with a gala banquet.

"We are not going to let the United States be taken advantage of anymore," he told an APEC business conference. He lambasted the World Trade Organization and other trade forums as unfair to the United States and reiterated his preference for bilateral trade deals, saying "I am always going to put America first."

Trump said he would not enter into large trade agreements, alluding to U.S. involvement in the North American Free Trade Agreement and the TPP.

In contrast, Chinese President Xi Jinping told the same group that nations need to stay committed to economic openness or risk being left behind.

Xi drew loud applause when he urged support for the "multilateral trading regime" and progress toward a free-trade zone in the Asia-Pacific. China is not part of the TPP.

APEC operates by consensus and customarily issues nonbinding statements. TPP commitments are to be eventually be ratified and enforced by its members.

But even talks this week on a declaration to cap the APEC summit had to be extended for an extra half day as ministers haggled over wording. The release of a set of ministerial agreements early Saturday suggested the leaders would finesse any disagreements, as usual, to demonstrate unity and avoid embarrassing their hosts.

As a developing country with a fast-growing export sector, this year's host country, Vietnam, has a strong interest in open trade and access for its exports to consumers in the West. The summit is an occasion for its leaders to showcase the progress its economy has made thanks largely to foreign investment and trade. Danang, Vietnam's third largest city, is in the midst of a construction boom as dozens of resorts and smaller hotels pop up along its scenic coastline.