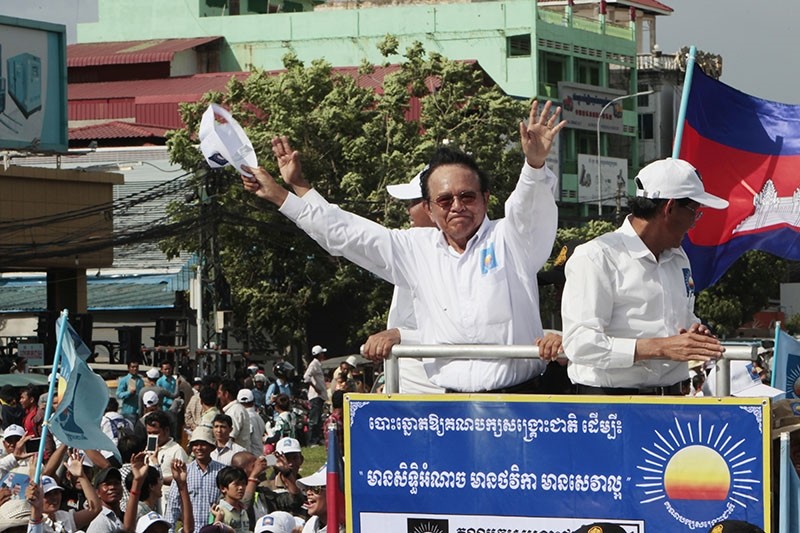 Cambodia's Supreme Court ordered the main opposition party to be dissolved on Thursday, dealing a crushing blow to democratic aspirations in the increasingly oppressive Southeast Asian state. The decision clears the way for the nation's authoritarian leader to remain in power for years to come.

The verdict, which was widely expected, comes amid a growing push by the administration of Prime Minister Hun Sen to neutralize political opponents and silence critics ahead of elections due in July 2018.

He said 118 opposition party members would also be banned from politics for the next five years, and the verdict could not be appealed.

The government accuses the Cambodia National Rescue Party of plotting a coup and has called for its dissolution for weeks. The opposition staunchly denies the allegations and says they are politically motivated — a position backed by international rights groups and independent analysts who say no credible evidence has emerged to back the claims.

The judge said the CNRP, by boycotting the trial, had effectively confessed to the government-levied accusation of conspiring with the United States and other foreign actors to plot a revolution.

The CNRP and Washington have rejected those charges as bogus.

In a statement the CNRP said it "still considers itself to be a legitimate party with a mandate from half of the Cambodian population", describing the court case as "politically motivated and made under pressure to follow the wish of the ruling party that is trying to rid CNRP from the political field".

In a televised address Thursday evening, Hun Sen called for calm and said 2018 elections would be held as scheduled.

"The government supports the decision of the Supreme Court and its ruling will ensure peace," said the premier, who has staked his reputation on bringing stability and growth to Cambodia after decades of civil war.

The party had been expected to pose a serious challenge in next year's polls. During the last vote in 2013, it scored major gains in a tense race that saw Hun Sen narrowly retain office.

Since then, the opposition's fortunes have ebbed dramatically.

Sam Rainsy, who led the party during that vote, went into exile in 2016 and faces a jail term for a criminal defamation conviction if he returns. The party's current leader, Kem Sokha, has been imprisoned since September, charged with treason.

Amid deepening fears over the nation's fate, more than 20 opposition lawmakers — about half of those with seats in Parliament — have also fled the country.

Mu Sochua, an opposition party vice president who is among those who have left, said the struggle for democracy was not over in Cambodia.

Speaking in London just before the verdict, she said there were no plans to launch demonstrations immediately. "But in the heart, in our hearts, in our minds, in our spirits, in our souls, the fight for democracy will continue. It will not die."

Amnesty International blasted the decision, calling it "a blatant act of political repression."

"This is yet more evidence of how the judiciary in Cambodia is essentially used as an arm of the executive and as a political tool to silence dissent," said James Gomez, Amnesty International's director for Southeast Asia and the Pacific.

"Sadly, this is just the culmination of several months of threats, rhetoric and outright repression. The authorities have launched a widespread assault on dissent ... the international community cannot stand idly — it must send a strong signal that this crackdown is unacceptable."

The government-led crackdown has targeted civil society groups and independent media outlets, too. In September, authorities shut down the English-language Cambodia Daily, and they have shuttered radio stations that aired programming from U.S.-funded Radio Free Asia and Voice of America, whose reports they allege are biased.

The government also expelled the U.S. National Democratic Institute, which helped train political parties and election monitors, accusing it of colluding with its opponents.

The crackdown reflects a major shift away from American influence, which has waned for years as Cambodia edges closer to China. Analysts say Hun Sen has also been emboldened by U.S. President Donald Trump, who has welcomed Thailand's coup leader to the Oval Office and praised the Philippine president despite a crackdown on drugs that has left thousands dead.

Hun Sen has been in office since 1985 and has held a tight grip on power since ousting a co-prime minister in a bloody 1997 coup.

Although Cambodia is a nominally a democratic state, its institutions remain fragile and the rule of law weak; the judiciary is not seen as independent.

Before Thursday's ruling, Hun Sen had encouraged opposition lawmakers to defect to his ruling party. In a speech last week to garment workers, he was so confident the court would rule against the opposition party that he offered anyone 100 to 1 odds if they were willing to bet it would not happen.

Charles Santiago, a Malaysian lawmaker who chairs the ASEAN Parliamentarians for Human Rights, slammed the verdict, calling it "the final nail in the coffin for Cambodian democracy."

"Its decision not only leaves the country without its only viable opposition party less than a year before scheduled elections, but also completely undermines Cambodia's institutional framework and the rule of law," Santiago said. "The CNRP was dissolved not for breaking any laws, but simply for being too popular and a threat to the ruling party's dominance."