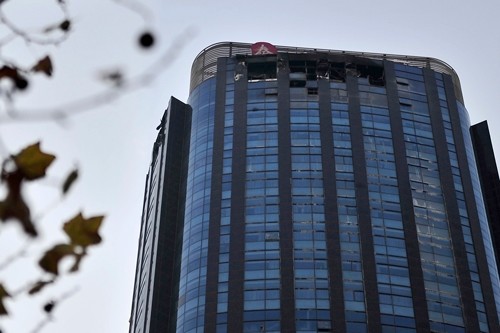 Damaged windows are seen on a high-rise building that was the site of a fatal fire in northern China's Tianjin Municipality (AP Photo)
by Associated Press Dec 01, 2017 12:00 am

Ten people died and five were injured in a fire early Friday in a northern Chinese port city where scores were killed in an explosion two years ago.

The fire department in Tianjin said the blaze broke out at 4 a.m. in a mixed residential-office building and was extinguished in less than three hours. It said the cause was unknown but that one individual is being held as part of the investigation. The official Xinhua News Agency said materials used for interior decoration are believed to have contributed to the blaze.

At a briefing Friday, a city official expressed condolences to the families of the victims and said a city-wide inspection would be conducted to prevent similar accidents.

"We feel great sorrow for such accident, and I, as the deputy mayor in charge of urban construction and management, have undeniable responsibility," said Sun Wenkui, deputy mayor of Tianjin.

In 2015, an explosion traced to improperly stored chemicals killed at least 173 people in Tianjin, which lies on the Bohai Sea coast about an hour east of Beijing.

Official safety crackdowns have improved conditions in some areas, but many companies still cut corners.