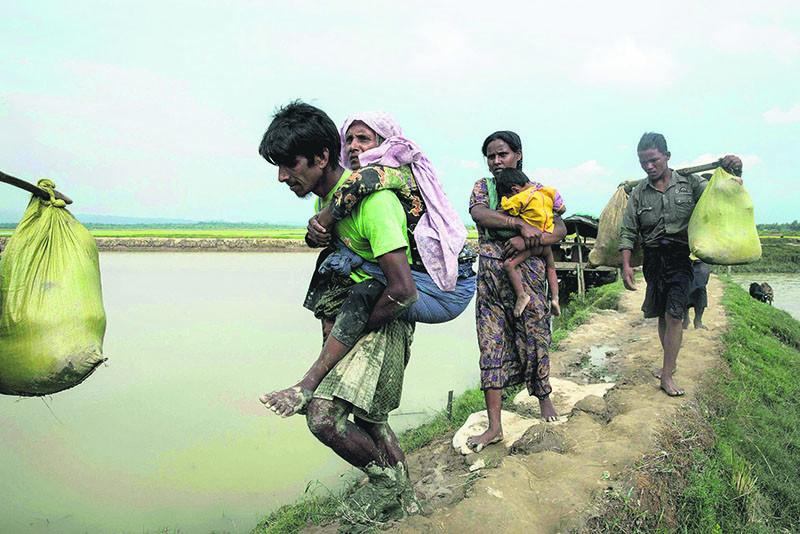 Displaced Rohingya refugees from Rakhine state walk near Ukhia, at the border between Bangladesh and Myanmar, Sept. 4.
by Compiled from Wire Services Dec 09, 2017 12:00 am

Rohingya refugees continue to flee Myanmar for Bangladesh even though both countries set up a timetable last month to allow them to start to return home, the U.N. refugee agency (UNHCR) said. Some 20,000 Rohingya fled Myanmar to Bangladesh in November, and at least 270 so far in December, bringing the total since violence erupted on August 25 to 646,000, according to UNHCR and Leonard Doyle of the International Organization of Migration (IOM), as reported by Reuters.

The United Nations refugee agency (UNHCR) said on Friday that peace and stability must be restored in Myanmar's northern Rakhine state before any Rohingya refugees can return from Bangladesh, under international standards on voluntary repatriation.

"It is critical that the returns are not rushed or premature," UNHCR spokesman Adrian Edwards told a Geneva briefing. "People can't be moving back in into conditions in Rakhine state that simply aren't sustainable."

"Most have little or nothing to go back to. Their homes and villages have been destroyed. Deep divisions between communities remain unaddressed and human access is inadequate," deputy high commissioner Kelly Clements said.

Myanmar's security forces may be guilty of genocide against the Rohingya Muslim minority, according to the top U.N. human rights official this week. Mainly Buddhist Myanmar denies the Muslim Rohingya are its citizens and considers them foreigners.

According to the U.N.'s top expert on the situation in Myanmar, Yanghee Lee, Myanmar authorities appear to have already started building camps for returnees, raising serious concerns about the conditions the Rohingya would return to.

Many female refugees have survived and witnessed extreme atrocities, said Pramila Patten, the U.N. special representative on sexual violence in conflicts. Some refugees witnessed "women and girls being tied to either a rock or a tree before multiple soldiers literally raped them to death," Patten told the rights body in Geneva, according to DPA. She collected testimonies from Rohingya in Bangladesh in November. In other cases, assailants raped women in their homes, before burning them alive.

"A few women told me how their own babies were allegedly thrown in the fire as they were dragged away by soldiers and gang-raped," Patten added.

Women and girls number about 51 percent of the distressed and traumatised Rohingya population in the Cox's Bazar camps, the U.N. Women agency said in October. "Women and children are also at heightened risk of becoming victims of human trafficking, sexual abuse or child and forced marriage," it added. Women and adolescent girls aged between 13 and 20 arriving from Myanmar typically had two to four children each, it said, with some of them pregnant. No relief agencies officially run the camp for the widows and orphans but aid groups and individuals help out.

The stateless Rohingya have been the target of communal violence and vicious anti-Muslim sentiment in mainly Buddhist Myanmar for years. They have also been systematically oppressed by the government, which stripped the minority of citizenship and severely restricts their movement, as well as their access to basic services. Tensions erupted into bouts of bloodshed in 2012 that pushed more than 100,000 Rohingya into grim displacement camps. Despite the squalid conditions in the overcrowded camps in Bangladesh, many of the refugees say they are reluctant to return to Myanmar unless they are granted full citizenship.