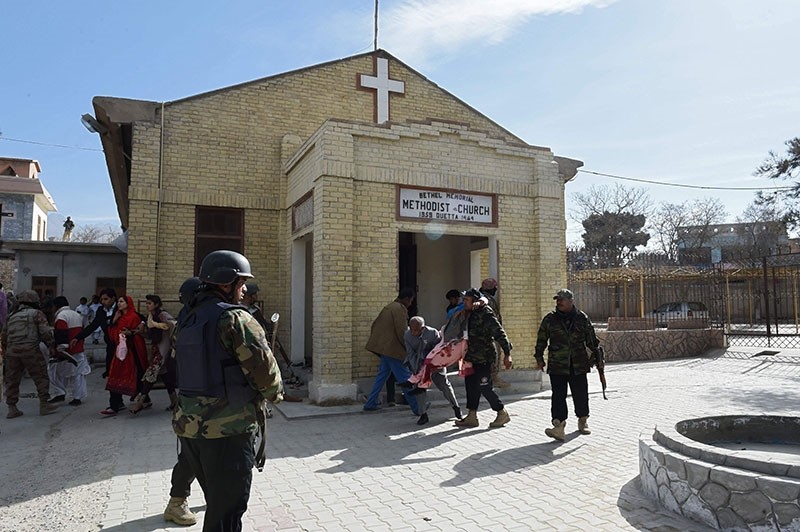 Pakistani security personnel rescue an injured woman after suicide bombers attacked a Methodist Church during a Sunday service in Quetta on Dec. 17, 2017. (AFP Photo)
by Compiled from Wire Services Dec 17, 2017 12:00 am

At least eight people were killed and 42 wounded in a church attack claimed by Daesh in the restive southwestern city of Quetta in Balochistan province, Pakistan

Two suicide bombers attacked a church in the Pakistani city of Quetta on Sunday, killing eight people and wounding 42 others, officials said.

The Daesh terrorist group claimed the attack with the group's Amaq news agency in an online statement, as reported by Reuters. It said two Daesh members had carried out the attack but provided no evidence for the claim.

Sarfaraz Bugti, home minister for the southwestern Baluchistan province, said hundreds of worshippers were attending services at the church ahead of Christmas. He said the attackers clashed with security forces, with one assailant killed at the entrance while the other made it inside.

Baluchistan Police Chief Moazzam Ansari praised the response of security forces guarding the church, saying the attacker who made it inside was wounded and unable to reach the main building. "Otherwise the loss of lives could have been much higher," he told reporters, according to AP.

Bugti said around 250 people normally attend the church on Sundays, but the congregation had swelled to around 400 because it was close to Christmas.

"God forbid, if the terrorists had succeeded in their plans more than 400 precious lives would have been at stake," tweeted the home minister.

An AFP reporter at the scene saw shattered pews, shoes and broken musical instruments littered across the blood-smeared floor of the church.

Christians make up an estimated 1.6 percent of Pakistan's 200 million people and have long faced discrimination – sidelined into lowly paid jobs and sometimes the target of trumped-up blasphemy charges.

"Terrorists have no religion, we will not allow them to disturb our peace and values, and they will be dealt with by the full might of the state," Abbasi said in a statement issued by his office.

The premier also expressed deep grief and sorrow over the loss of lives in the attack.

"We condemn this terrorist attack and convey our condolences to the friendly and brotherly Government and people of Pakistan," the statement by the ministry read.

Following the latest attack, dozens of Christians protested in the northwestern city of Peshawar and called on officials to protect religious minorities. In September 2013, a twin suicide bomb attack at the city's All Saints Church killed some 127 people and injured over 250, in the deadliest attack on Pakistan's Christian community in the nation's history.

And last year Lahore suffered one of Pakistan's deadliest attacks during the Easter season – a suicide bomb in a park that killed more than 70 people including many children. The bombing was later claimed by the Jamaat ul Ahrar faction of the Pakistani Taliban.

Balochistan, bordering Iran and Afghanistan, is the largest of the country's four provinces but its roughly seven million people have long argued they do not get a fair share of its vast gas and mineral wealth. Efforts to promote peace and development have reduced the violence considerably in recent years. The push includes continuing work on a mammoth Chinese infrastructure project – the China-Pakistan Economic Corridor – which will provide Beijing with a modern-day Silk Road to the Arabian Sea through Balochistan's deep-sea port of Gwadar.