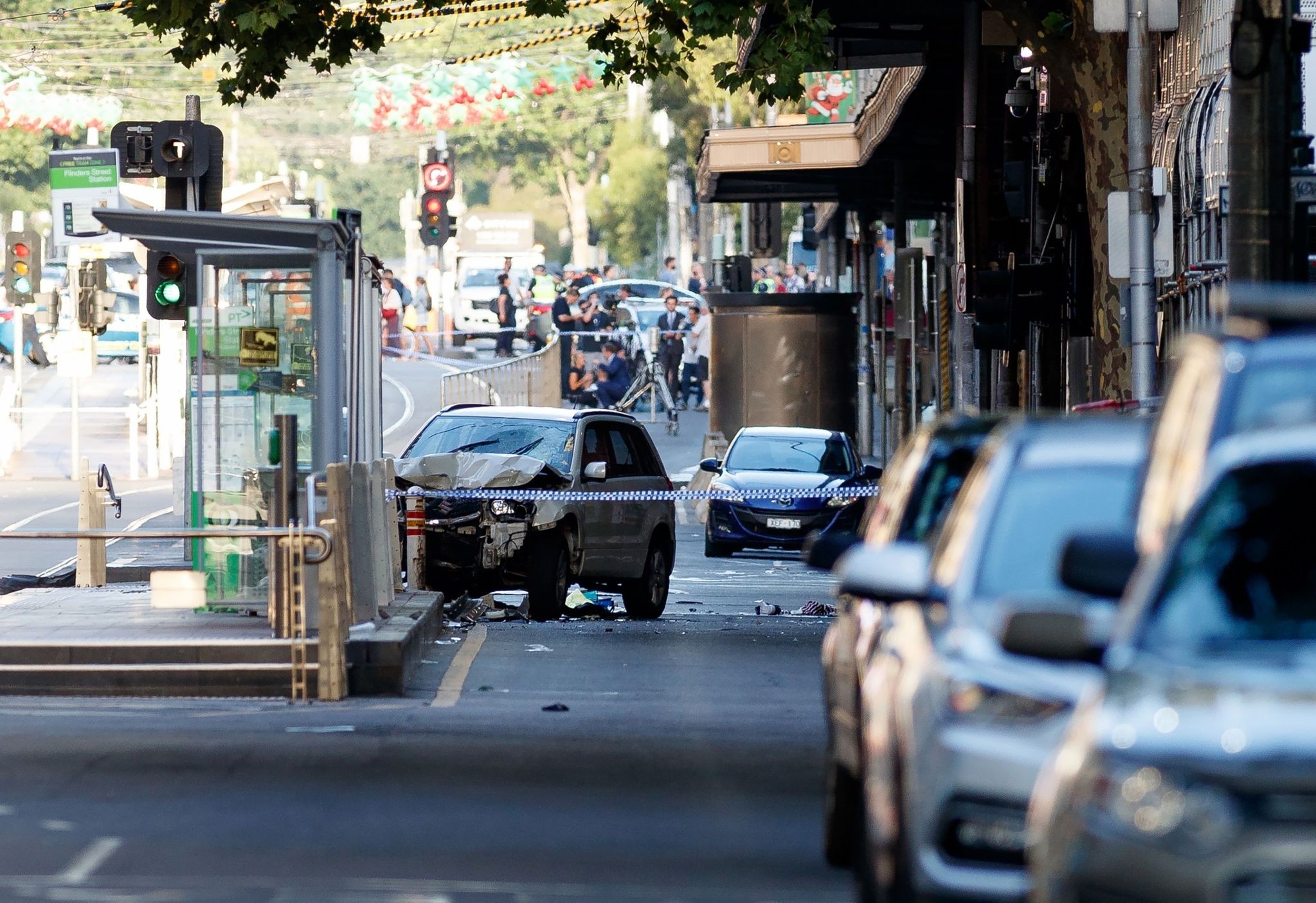 Two men were arrested in Australia after the SUV in which they were traveling rammed into pedestrians on a busy central Melbourne street Thursday, leaving 14 people injured in what police believe was a deliberate act.

Victoria state police said the driver of the vehicle and a second man were in custody after the incident, which occurred on Flinders Street in the city's central business district just after 4:45 p.m. when the area was busy with Christmas shoppers.

Commander Russell Barrett told media that while the motive of the incident was not immediately clear, "at this stage we believe it was a deliberate act."

Asked if police had ruled out terrorism as motivation, Barrett said only: "At this stage it's early days in the investigation and the motivation is unknown."

Witnesses described horrific scenes from the incident, which started when the SUV ran a red light outside the city's iconic Flinders Street train station and sped up to hit pedestrians crossing the road, striking more than a dozen people before crashing into a traffic barrier near a cable car stop.

"I was crossing Flinders Street on the way to the train station. I heard an engine rev behind me and heard a thump," one man identified only as David said on ABC TV. He said he turned around saw "people literally getting thrown into the air as it hit them."

Witnesses said when the car crashed it was rushed by bystanders who started pulling the two men out before police arrived a few minutes later.

Prime Minister Malcolm Turnbull sent a tweet calling the incident "shocking" and said his thoughts and prayers were with the victims and those treating them.

Police said officers have been deployed across the area and the site would be closed-off as a crime scene for some time.

"Police will continue to have a strong presence in the Melbourne CBD tonight," Barrett said.

It's the second time this year that Melbourne, regularly ranked one of the world's most livable cities, has been traumatized by a car attack.

In January, six people were killed and more than 30 were injured when a car was driven up a footpath in Bourke Street, near Thursday's incident. Police arrested the driver, who was known to police for a history of illicit drug use, family violence and mental health problems. Police said the case was not terrorism-related.

There have been a number of car attacks in other parts of the world in recent years, many of them linked to terrorism.

In October a man drove a truck down a New York City bicycle path, killing eight people. The driver is accused of providing material support to the Daesh among other charges including murder.

In an August attack, 13 people were killed and more than 100 were wounded when a vehicle rammed into pedestrians on a walking street in Barcelona. London has seen three such attacks this year, two linked to extremists and another seen as a reprisal attack outside a mosque, killing 13 people altogether.

A vehicle attack on a shopping street in Stockholm in April killed five people, while an attack on a Christmas market in Berlin last December killed 12.

The deadliest such attack in recent years took place in Nice, France, in July 2016 when a man drove a refrigerated truck weighing about 20 tons into a crowd, killing 86 people.