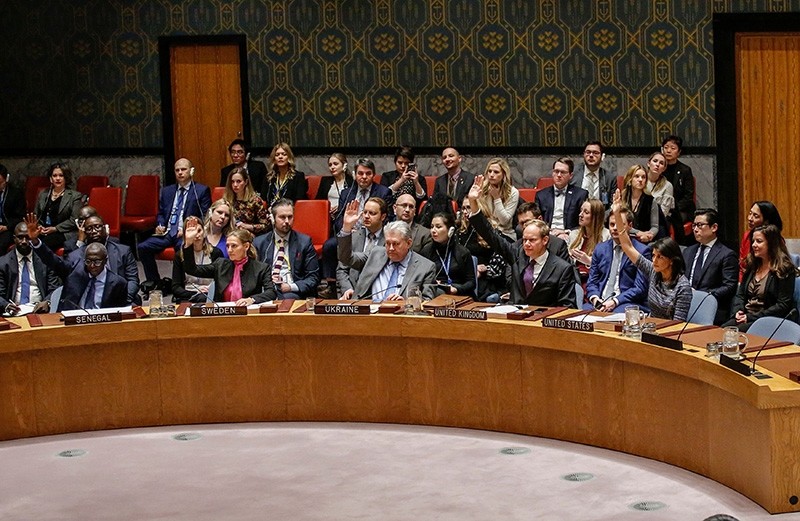 North Korea on Sunday called the latest U.N. sanctions to target the country "an act of war" that violates its sovereignty, and said it is a "pipe dream" for the United States to think it will give up its nuclear weapons.

The U.N. Security Council unanimously approved tough new sanctions against North Korea on Friday in response to its latest launch of a ballistic missile that Pyongyang says can reach anywhere on the U.S. mainland. The resolution was drafted by the United States and negotiated with the North's closest ally, China.

"We define this 'sanctions resolution' rigged up by the U.S. and its followers as a grave infringement upon the sovereignty of our Republic, as an act of war violating peace and stability in the Korean peninsula and the region and categorically reject the 'resolution,'" North Korea's foreign ministry said in a statement.

The ministry said the sanctions are tantamount to a "complete economic blockade" of North Korea.

"If the U.S. wishes to live safely, it must abandon its hostile policy towards the DPRK and learn to co-exist with the country that has nuclear weapons and should wake up from its pipe dream of our country giving up nuclear weapons which we have developed and completed through all kinds of hardships," said the statement, carried by the North's official Korean Central News Agency.

The new sanctions approved in the council resolution include sharply cutting limits on North Korea's imports of refined oil, forcing all North Koreans working overseas to return home within 24 months, and cracking down on shipping to and from the country.

But the resolution doesn't include even harsher sanctions sought by the Trump administration, such as prohibiting all oil imports and freezing the international assets of North Korea's government and its leader, Kim Jong Un.

The resolution, drafted by the United States and negotiated with China, drew criticism from Russia for the short time the 13 other council nations had to consider the draft, and last-minute changes to the text. Two of those changes were extending the deadline for North Korean workers to return home from 12 months to 24 months and reducing the number of North Koreans being put on the U.N. sanctions blacklist from 19 to 15.

U.S. Ambassador Nikki Haley said after the vote that "the unity this council has shown in leveling these unprecedented sanctions is a reflection of the international outrage at the Kim regime's actions."

She recalled that the previous sanctions resolution, when combined with earlier measures, would ban over 90 percent of North Korea's exports reported in 2016.

Haley told the council Friday that the new resolution "bans all remaining categories of major North Korean exports — a loss of nearly $250 million in revenue to the regime."

Here are key provisions of the new sanctions:

—The import of crude oil is capped at 4 million barrels a year and countries supplying oil are required to provide quarterly reports to the Security Council committee monitoring sanctions on North Korea.

—North Korea is banned from exporting food and agriculture products, machinery, electrical equipment, earth and stones, wood and vessels — and all countries are banned from importing these items.

—All countries are banned from exporting industrial machinery, transportation vehicles, iron, steel and other metals to North Korea.

—All countries must expel North Korean workers and safety monitors by the end of 2019. The resolution expresses concern that earnings from these workers are being used to support the country's nuclear and ballistic missile programs. According to the U.S. Mission, there are nearly 100,000 overseas North Korean workers, with about 50,000 in China and 30,000 in Russia.

—U.N. member states are authorized to seize, inspect and impound any ship in their ports or territorial waters suspected of being involved in illegal smuggling and evasion of U.N. sanctions. The resolution expresses "great concern" that North Korea is illegally exporting coal and other prohibited items "through deceptive maritime practices and obtaining petroleum illegally through ship-to-ship transfers."

—All countries are banned from providing insurance or re-insurance to North Korean-affiliated ships believed to be involved in illegal smuggling and sanctions evasion and are required to de-register these vessels.

—Fifteen North Koreans, including 13 representing banks overseas, and the Ministry of the People's Armed Forces were added to the U.N. sanctions blacklist. The two others facing a travel ban and asset freeze are Kim Jong Sik, identified as a leading official guiding North Korea's development of weapons of mass destruction, and Ri Pyong Chul, an alternate member of the Political Bureau of the ruling Workers' Party of Korea and first vice director of the Munitions Industry Department.

North Korea's test on Nov. 29 of its most powerful intercontinental ballistic missile yet was its 20th launch of a ballistic missile this year, and added to fears that it will soon have a military arsenal that can viably target the U.S. mainland.

France's U.N. ambassador, Francois Delattre, said: "We believe maximum pressure today is our best lever to a political and diplomatic solution tomorrow ... (and) our best antidote to the risk of war."

The new resolution reiterates the Security Council's regret at North Korea's "massive diversion of its scarce resources toward its development of nuclear weapons and a number of expensive ballistic missile programs." It notes that 41 percent of the population is undernourished.

The resolution reaffirms the council's support for a resumption of six-party talks on North Korea's nuclear program aimed at the peaceful denuclearization of the Korean Peninsula.

It also reiterates the importance of maintaining peace and stability in northeast Asia and "expresses its commitment to a peace, diplomatic and political solution to the situation ... through dialogue."