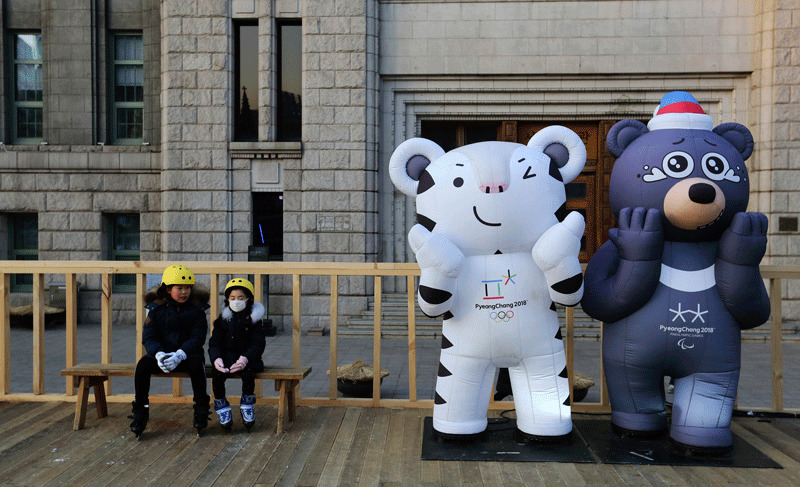 Children sit next to the 2018 Pyeongchang Winter Olympic Games' official mascots, a white tiger Soohorang, for the Olympics, and black bear Bandabi, right, for Paralympics (AP Photo)
by Jan 03, 2018 12:00 am

North Korea said Wednesday it will reopen a hotline with the South to discuss attending the Winter Olympics, forging ahead with peace overtures despite taunts from U.S. President Donald Trump who said he has a "much bigger" nuclear button than Kim Jong-Un.

The hotline, which was cut by the North in 2016, is to be restored at 0630 GMT after Seoul proposed high-level talks in response to an olive branch from the North's leader ahead of next month's Pyeongchang Games.

Kim's overtures to the South marked a rare softening in tone, as tensions over its banned weapons program have surged in recent months following a flurry of missile launches and its most powerful nuclear test yet.

Seoul responded with an offer to hold talks on January 9 -- the first since 2015 -- to discuss "matters of mutual interest" including Kim's suggestion that the reclusive nation could participate in the Olympics.

But Kim's New Year address also included a warning to the US that he has a "nuclear button" on his table, prompting a furious response from President Trump via Twitter.

"North Korean Leader Kim Jong Un just stated that the 'Nuclear Button is on his desk at all times.'

"Will someone from his depleted and food starved regime please inform him that I too have a Nuclear Button, but it is a much bigger & more powerful one than his, and my Button works!" he said.

Trump's remarks came as his ambassador to the United Nations Nikki Haley dismissed Seoul's offer to hold talks, calling it a "band-aid".

U.S. State Department spokesman Heather Nauert also warned that Kim "may be trying to drive a wedge of some sort between the two nations -- between our nation and the Republic of Korea".

But the rapprochement seemed to be moving ahead on Wednesday, with Kim welcoming Seoul's support for his overtures, according to Ri Son-gwon, the head of North Korea's agency handling inter-Korean affairs.

The two countries, which are divided by a Demilitarized Zone since the end of the 1950-53 Korean War, last held high-level talks in 2015 to try to ease tensions.

The hotline, located in the truce village of Panmunjom, remained operational until February 2016, with operators from both countries checking it twice a day.

The channel was shut down when relations deteriorated over a dispute involving the Kaesong industrial complex, which was jointly operated by both countries.

Seoul welcomed Pyongyang's decision to reopen the hotline as "very significant", with chief presidential press secretary Yoon Young-chan saying "it creates an environment where communication will be possible at all times".

South Korean President Moon Jae-In has long favored engagement with the nuclear-armed North, but the Trump administration insists the regime must give up its weapons drive before any negotiations can take place.

Ambassador Haley told reporters that Washington could not take the talks seriously "if they don't do something to ban all nuclear weapons in North Korea".

North Korea has shrugged off a raft of new sanctions and heightened rhetoric from Washington as it drives forward with its weapons program, which it says is for defense against U.S. aggression.

Pyongyang claims it needs nuclear weapons to protect itself from a hostile Washington and has striven to create a warhead capable of targeting the U.S. mainland with an atomic warhead.

Moon on Tuesday welcomed Kim's olive branch as a "positive response" to Seoul's hopes that the Pyeongchang Olympics would be a "groundbreaking opportunity for peace".

But any rapprochement between the two countries will take place against a backdrop of suspicion, if not outright hostility, by Washington, with Trump and Kim exchanging angry insults since the U.S. leader took office a year ago.

Trump has mocked Kim as "fat" and a "little rocket man." Kim, for his part has described Trump as a "mentally deranged U.S. dotard."