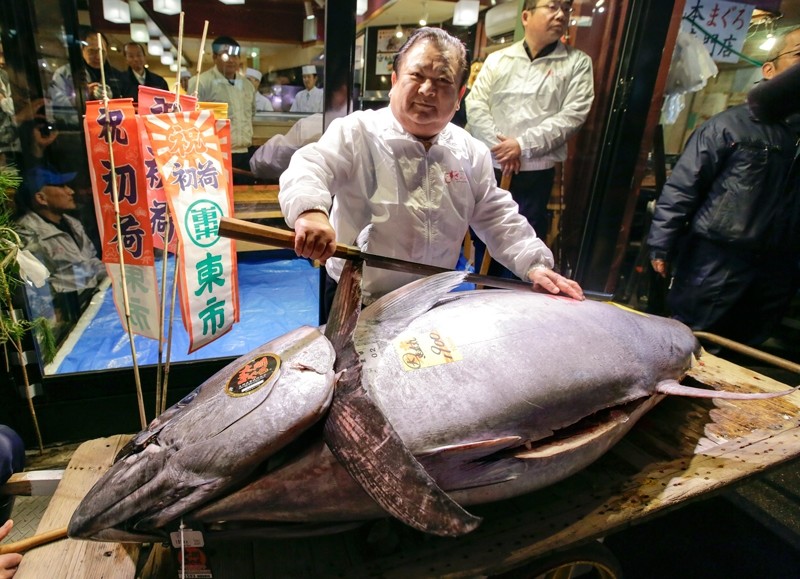 Kiyoshi Kimura (C), who runs the Sushi Zanmai chain sushi restaurant, poses with a tuna cutting knife in front of his the bluefin tuna he bid on in the final year-opening auction at Tsukiji Market in Tokyo, Japan, 05 January 2018 (EPA Photo)
by Compiled from Wire Services Jan 05, 2018 12:00 am

In the final New Year's auction at Tokyo's famed Tsukiji fish market on Friday, the owner of an international sushi restaurant shelled out more than $300,000 for a prime bluefin tuna and said he was "very happy" with the result.

The world's largest fish market, one of Tokyo's most popular tourist sites, is set to relocate later this year to clear the way for a road needed for the Tokyo 2020 Olympics.

The price was just over half that of last year's winning bid of 72 million yen and well below the record 155 million yen paid in 2013.

"I've tried to win in the auction since last year, so I'm really happy," said Onodera, whose company has restaurants in New York and Singapore as well as in Japan. "This is especially true because it's the last year in Tsukiji."

Tuna is prized around the world for its use in sushi, but experts warn growing demand has made it an endangered species.

"The high price paid today for a single Pacific bluefin tuna should not distract from the dire status of the species, which has been depleted by more than 97 percent by years of overfishing," said Jamie Gibbon, a Pacific bluefin tuna expert for the Pew Charitable Trusts, in a statement.

"If countries continue to exceed their catch limits...the very survival of the species will be threatened."

The 80-year-old Tsukiji market draws tens of thousands of visitors a year to its warren of stalls with exotic species of fish and fresh sushi, part of a tourism boom that is a key part of Prime Minister Shinzo Abe's economic revival plan.

"This will truly be the final auction here, so I made sure I came to watch," said Mitsuko Yamaguchi, the 61-year-old owner of a seafood store.

Japanese are the biggest consumers of the torpedo-shaped bluefin tuna, and surging consumption here and overseas has led to overfishing of the species. Experts warn it faces possible extinction, with stocks of Pacific bluefin depleted by more than 97 percent from their pre-industrial levels.

There are signs of progress toward protecting the bluefin, though. Japan has begun enforcing laws banning catches that exceed quotas, with violators subject to fines or possible jail time.

Japan and other governments recently agreed on a plan to rebuild Pacific bluefin stocks, with a target of 20 percent of historic levels by 2034.

Tsukiji is one of Tokyo's most popular tourist destinations as well as the world's biggest fish market. It was due to move to the new site, at Toyosu, in 2016. Tokyo Gov. Yuriko Koike postponed the relocation but after months of political haggling and uncertainty she announced the move would go ahead.