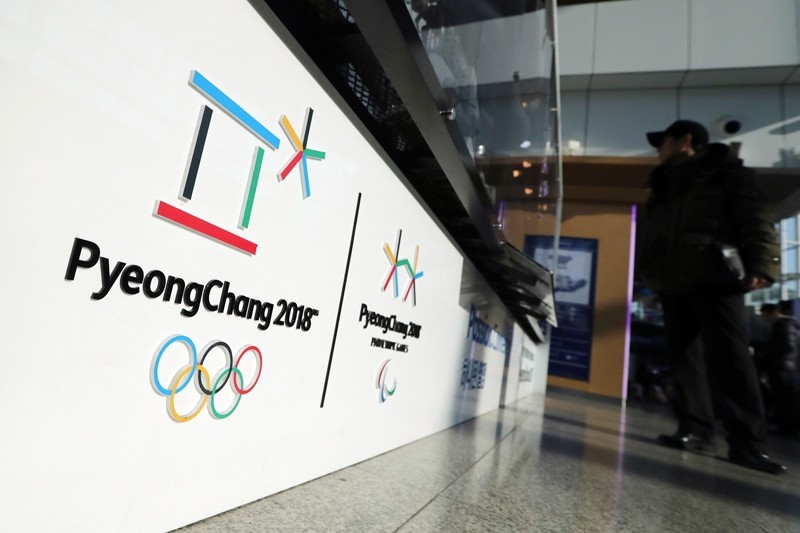 The official emblems of the 2018 Pyeongchang Olympic and Paralympic Winter Games are seen at the Seoul Train Station in Seoul, South Korea (AP Photo)
by Compiled from Wire Services Jan 06, 2018 12:00 am

North Korea's Olympic representative said Saturday the reclusive nation was "likely to participate" in next month's Winter Games in South Korea, Kyodo news agency reported, in the latest sign of a thaw in tensions on the peninsula.

The comments by Chang Ung, Pyongyang's representative to the International Olympic Committee (IOC), come a day after the North and South agreed to hold rare talks next week and follow Seoul and Washington's announcement that they would postpone joint military exercises that rile North Korea.

Chang Ung made the comment to reporters at Beijing's international airport, Kyodo reported.

Chang arrived in Beijing from Pyongyang and is believed to be headed to Switzerland to discuss with the IOC North Korea's participation in the games, the agency reported, citing an unnamed source.

North Korean leader Kim Jong-Un said in a new year speech that his country wished success for the Olympics, to be held from February 9-25, and would consider sending a delegation.

The two Koreas have been separated by the world's most heavily militarized border since the Korean War ended in a stalemate in 1953.

Seoul and organizers are keen for the North to take part in the Games to help ease worsening tensions on the Korean peninsula stemming from Pyongyang's nuclear and missile programs.

In recent months, North Korea has held multiple missile launches and its sixth and most powerful nuclear test -- purportedly of a hydrogen bomb -- in violation of U.N. resolutions banning such activity by the isolated nation.

The region has been further rattled by tit-for-tat threats and insults between Kim and US President Donald Trump.

But the new year has witnessed a marked softening of tone.

Seoul has reacted warmly to Kim's Olympic overture and the two Koreas this past week restored a cross-border hotline that had been shut down since 2016 and agreed to hold high-level talks next week -- the first since December 2015.

Those talks are expected to focus on matters including Olympic participation.

Also in recent days, the United States and South Korea agreed to delay their joint military exercises until after the Games, apparently to help ease nerves.

The regular joint drills have been criticized by some as adding to regional tensions. Beijing and Moscow have both called for them to be suspended.

North Korea's young leader has shrugged off multiple sets of new U.N. Security Council sanctions as his regime drives forward with its weapons programs, which it says are needed to defend against U.S. aggression.

The latest round of sanctions passed in December bans the supply of nearly 75 percent of refined oil products to North Korea, puts a cap on crude deliveries and orders all North Korean nationals working abroad to be sent back by the end of 2019.

Sales of all industrial machinery, trucks, iron, steel and other metals to North Korea have been banned, as well as a range of Northern exports.

China, North Korea's longtime ally and most important economic lifeline, said it had begun enforcing the new restrictions on Saturday.

South Korean opposition parties have struck a cautious tone over the latest developments, warning against making concessions to the North to secure its Olympic participation.