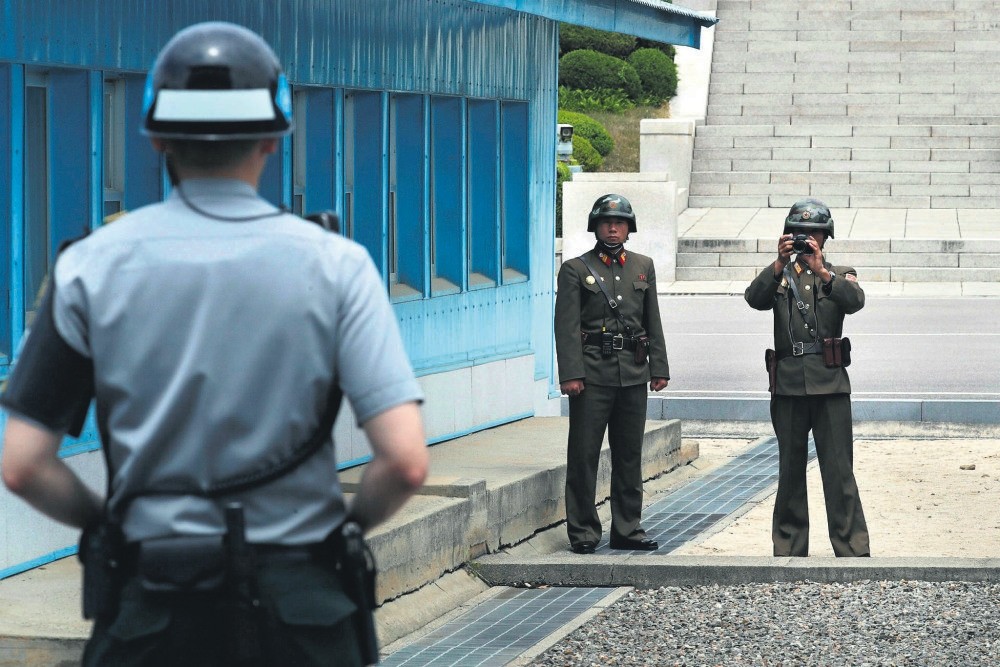 A North Korean soldier takes a photo of a South Korean soldier on guard just behind the military demarcation line that traverses the inter-Korean truce village of Panmunjom.
by Compiled from Wire Services Jan 06, 2018 12:00 am

After months of tension, North Korea has agreed to hold official talks with South Korea next week for the first time in more than two years

North and South Korea agreed on Friday to hold their first talks in more than two years, hours after Seoul and Washington decided to defer joint military exercises – which always infuriate Pyongyang – until after the Winter Olympics.

The meeting, the first since December 2015, will take place in Panmunjom, the truce village in the heavily fortified Demilitarized Zone that divides the peninsula.The tentative rapprochement comes after North Korean leader Kim Jong-Un warned in his New Year's speech that he had a nuclear button on his desk, but at the same time offered Seoul an olive branch, saying Pyongyang could send a team to next month's Olympic Games in the Pyeongchang, South Korea.

South Korean President Moon Jae-in said that "overly optimistic expectations" were undesirable but added: "We will do our best to make the Pyeongchang Olympics an Olympics for peace and settle the nuclear issue peacefully."

Tensions have been high after the North carried out multiple missile launches in 2017, including a number of inter-continental ballistic missiles (ICBM), and its sixth atomic test, by far its most powerful to date. Seoul responded with an offer of talks and the hotline between them was restored earlier this week after being suspended for almost two years.

Late Thursday, Moon and U.S. President Donald Trump agreed to delay the giant Foal Eagle and Key Resolve joint military drills until after the Winter Olympics, which begin in Pyeongchang on Feb. 9. That announcement came hours after Trump said high-level talks between the North and South would be "a good thing" – although the U.S. has long insisted that it will not negotiate with Pyongyang unless it first takes concrete steps toward disarmament.

Seoul's Unification Ministry said it had received a fax from Ri Son-Gwon, head of the North's Committee for Peaceful Reunification of Korea, a state agency handling inter-Korean affairs, that said: "We will come to the Peace House at Panmunjom on Jan. 9."

The Peace House is a South Korean-built building on the southern side of Panmunjom, where troops from the two sides face against each other across a concrete dividing line.

Moscow hopes "this positive trend will be underpinned by concrete agreements aiming at a settlement in the Korean peninsula," the source said.

Last year saw fears of conflict spike, with Kim and Trump trading personal insults and threats of war, and the U.S. president responded to Kim's New Year message with a tweet that his nuclear button was "much bigger and more powerful," prompting scorn and alarm from analysts.

Concerns over North Korea have overshadowed the Winter Games, which Seoul and the organizers have proclaimed a "peace Olympics," urging Pyongyang to participate, unlike the 1988 Summer Olympics in the South, which it boycotted. Tensions always rise during the annual drills, which Pyongyang condemns as preparations for invasion and often responds to with provocations.

Beijing and Moscow both see the exercises as adding to regional tensions, but recent days have seen a rare softening of tone on both sides.

Announcing the delay to the drills, the White House said in a statement: "The two leaders agreed to de-conflict the Olympics and our military exercises so that United States and Republic of Korea forces can focus on ensuring the security of the Games."