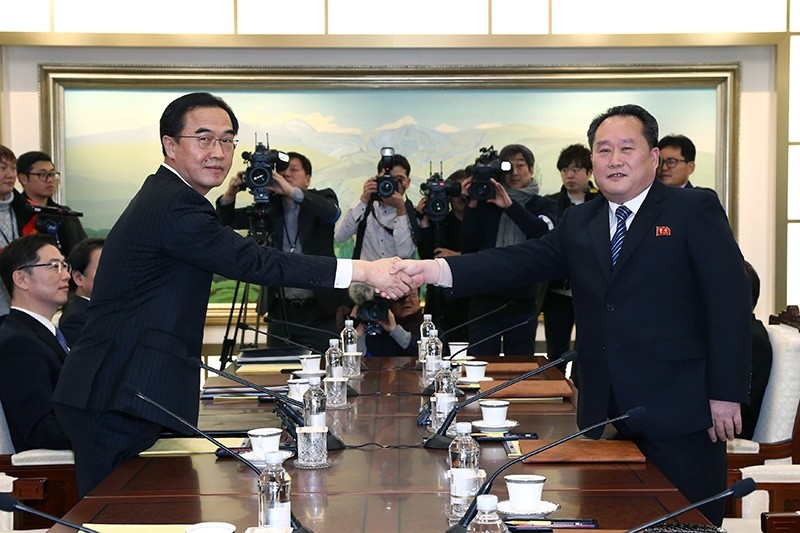 Head of the North Korean delegation, Ri Son Gwon shakes hands with his South Korean counterpart Cho Myoung-gyon during their meeting at the truce village of Panmunjom in the demilitarised zone separating the two Koreas. (Reuters Photo)
by Daily Sabah with Wires Jan 09, 2018 12:00 am

Senior officials of the rival Koreas gathered at the border village of Panmunjom on Tuesday for their first formal talks in about two years.

After a high-level meeting between the two sides, Yonhap news agency reported that both Pyongyang and Seoul agreed to continue the discussions, with the North also agreeing to military talks that were proposed by the South in July last year.

South Korea asked its northern neighbor to halt hostile acts that raise tension on the Korean peninsula, Seoul said in a statement.

North Korea responded that there was a need to guarantee a peaceful environment on the peninsula and agreed to hold future military talks with the South, it added.

North Korea also said its nuclear arsenal is solely aimed at the United States and any use of the weapons in Asia would negatively impact inter-Korean ties.

"North Korea's weapons are only aimed at the United States, not our brethren, China or Russia," said Ri Son Gwon, head of North Korea's delegation.

Ri added that Pyongyang's nuclear program was not an issue between North and South Korea.

Tuesday's joint statement also said North Korea agreed to send a delegation to the Winter Olympics in Pyeongchang, South Korea next month, and work for the success of the games.

The atmosphere was friendlier on Tuesday than at past meetings. The South's Unification minister Cho Myoung-Gyon told Ri: "The people have a strong desire to see the North and South move toward peace and reconciliation."

"Let's present the people with a precious new year's gift," said Ri. "There is a saying that a journey taken by two lasts longer than the one traveled alone."

But there was no mention in the joint statement of a proposal by Seoul to resume reunions of families left divided by the Korean War, or of an offer by the North to send a high-level delegation to the Games.

Even so, it was a radically different tone from the rhetoric of recent months, which have seen the North's leader Kim Jong-Un and U.S. President Donald Trump trade personal insults and threats of war.

Pyongyang has defied international pressure in recent months and launched missiles capable of reaching the U.S. mainland, as well as testing what it said was a hydrogen bomb.

The U.S. and South Korea agreed last week to delay their joint military exercises until after the Games, apparently to help calm nerves.

Seoul and Olympic organizers have been keen for Pyongyang – which boycotted the 1988 Summer Games in the South Korean capital – to take part in what they repeatedly proclaimed a "peace Olympics" in Pyeongchang next month.

But the North had given no indication it would do so until leader Kim Jong-Un's New Year address last week, instead of pursuing its banned weapons programs in defiance of United Nations sanctions, launching missiles capable of reaching the United States and detonating its sixth and most powerful nuclear test.

"The North Korean side will dispatch a National Olympic Committee delegation, athletes, cheerleaders, art performers' squad, spectators, a taekwondo demonstration team and a press corps and the South will provide necessary amenities and facilities," the countries said in a joint statement.

Only two athletes from the North have qualified for the Games so far, but hundreds of young female North Korean cheerleaders have created a buzz at three previous international sporting events in the South.

The group may stay on a cruise ship in Sokcho, about an hour's drive from the Olympic venue.

According to South Korean reports, any high-level delegation accompanying the team could include Kim's younger sister Yo-Jong, who is a senior member of the ruling Workers' Party.