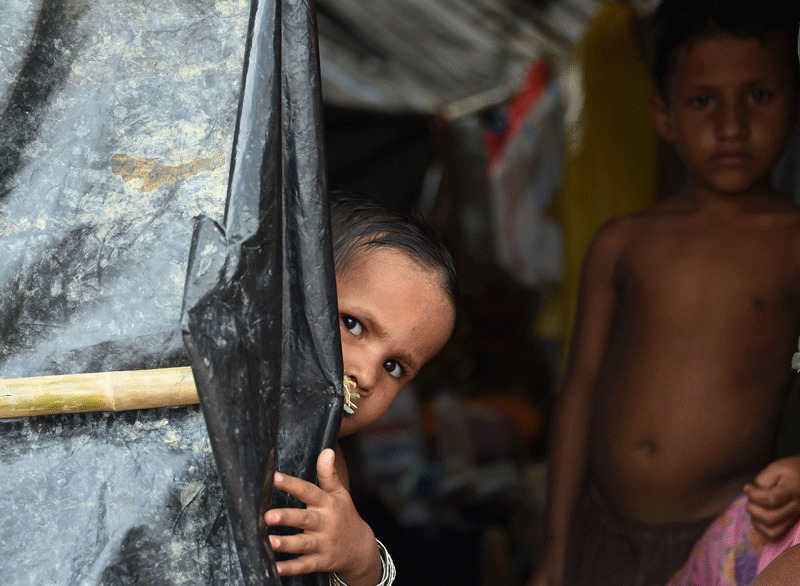 Rohingya refugee children look our from their makeshift shelter at the refugee camp of Balukhali near the locality of Ukhia (AFP File Photo)
by Jan 10, 2018 12:00 am

About 100 Rohingya children are stranded in Myanmar without their parents after military operations drove 655,000 people into Bangladesh since August, the United Nations said.

Another 60,000 Rohingya children are languishing "almost forgotten" in disease-ridden camps inside Myanmar since being driven from their homes during violence in 2012, a U.N. children's agency (UNICEF) spokeswoman Marixie Mercado said.

Mercado told reporters in Geneva on Tuesday that she spent a month in Myanmar's Rakhine state and visited one camp where "shelters teeter on stilts above garbage and excrement" and four children died of disease within three weeks.

"We hear of high levels of toxic fear in children from both Rohingya and Rakhine communities," she said, referring to the ethnic Rakhine people, the majority population in the state.

Myanmar government spokesman Zaw Htay told the Thomson Reuters Foundation that authorities are not aware of any children left alone in Myanmar during the Rohingya exodus to Bangladesh in the last half of 2017.

Tensions have simmered for decades between Rakhine Buddhists and minority Rohingya Muslims who are denied citizenship, although many families have lived in the region for generations.

Hundreds were killed in two bouts of violence in 2012 in Rakhine state, and 120,000 Rohingya remain in camps there.

In the wake of the 2012 clashes, some Rohingya began organizing a militant group, which struck first in 2016, killing nine border police officers.

The military responded with "clearing operations" that rights groups say have been accompanied by rapes and murders of Rohingya civilians whose houses have been burned down.

Myanmar has rejected accusations of ethnic cleansing, blaming most of the violence on the insurgents. Mercado said that at least 100 Rohingya children were separated from their families during the exodus, and most are in areas of northern Rakhine that are off limits to humanitarians.

The U.N. estimates only 60,000 Rohingya remain out of a population of 440,000 in the frontier township of Maungdaw.

Zaw Htay said Myanmar will on Jan. 22 begin repatriating 300 refugees per day from Bangladesh under an agreement signed in November.

He said the government has begun rebuilding houses for some returnees, while others will be sent to "temporary camps" near their home villages.

In a December letter to the Bangladesh and Myanmar governments, Human Rights Watch warned that they risk violating international law by pressuring refugees to return to Myanmar where they are still at risk of attack by security forces.

The U.N.'s refugee agency (UNHCR) has offered to help ensure that repatriation is aligned with international standards.