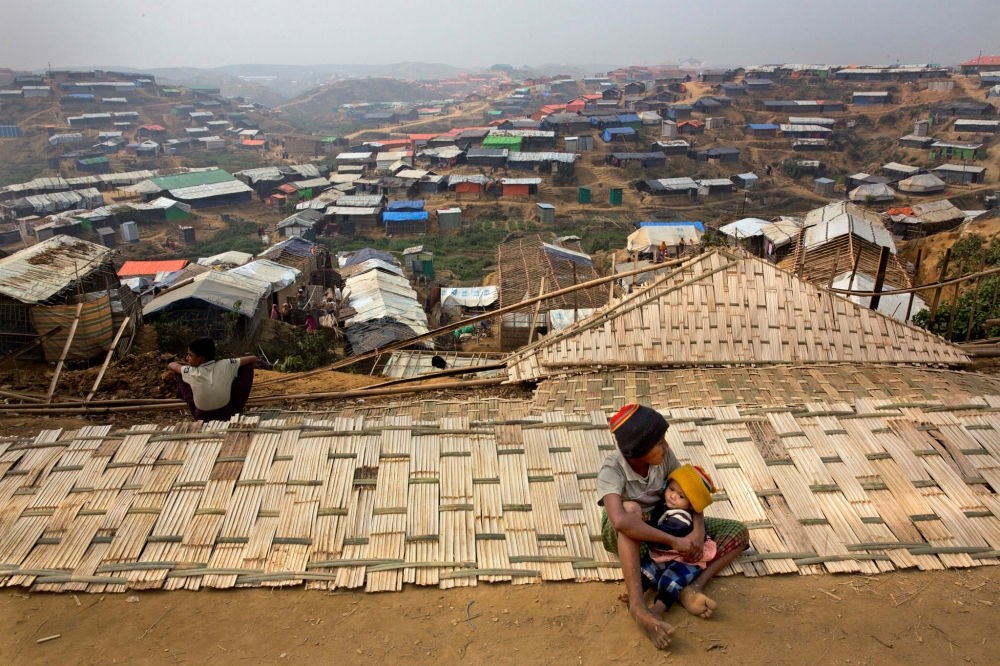 A Rohingya boy holds his sibling in the Balukhali refugee camp, Cox's Bazar, Bangladesh, Jan. 15.
by Compiled from Wire Services Jan 18, 2018 12:00 am

Despite the U.N. estimating that there are 962,000 living in southeast Bangladesh near the Myanmar border, the number of Rohingya refugees has hit more than 1 million, a Bangladeshi official has said

Bangladesh has counted more than a million Rohingya refugees living in camps near the border with Myanmar, higher than previous estimates, the head of its registration project said yesterday as preparations for their return got underway.The Bangladesh army began biometric registering of the refugees last year after the latest mass influx of Rohingya from Myanmar, where the Muslim minority have faced decades of persecution.

The registration is aimed partly at aiding repatriation of the refugees, a controversial issue as most say they do not want to return. Bangladesh says it wants to start sending them home next week and has reached an initial agreement with Myanmar to complete the process within two years.

"So far we've registered 1,004,742 Rohingya. They are given biometric registration cards," said Saidur Rahman, a brigadier general with the Bangladesh army who heads the Rohingya registration project, as reported by the AFP.

"Several thousand more have yet to be registered," he said.

The figures are higher than those provided by the U.N., which estimates there are 962,000 Rohingya living in southeast Bangladesh, near the Myanmar border. That includes the 655,000 the U.N. estimates have entered the country since Aug. 25, when the Myanmar military launched a violent crackdown in Rakhine state following attacks by Rohingya militants.

Doctors Without Borders has said at least 6,700 Rohingya Muslims were killed in the first month of the crackdown. Refugees in Bangladesh have alleged mass rape and widespread arson at the hands of soldiers and the Buddhist majority in Rakhine.Bangladesh and Myanmar agreed on Tuesday to complete the return of hundreds of thousands of Rohingya Muslims within two years as conditions for their homecoming remain uncertain.

Some of the refugees have been living in Bangladesh for many years, but the repatriation agreement only covers those who have arrived since October 2016.

The international community and rights groups have stressed that the Myanmar government must guarantee the "safe and voluntary" return of the refugees and urged that international organizations be allowed to participate.

However, the U.N. refugee agency said on Tuesday that it has not been invited to take part or given full access to the areas where refugees are to return.

The U.N. called yesterday for Rohingya refugees who have fled to Bangladesh to be informed about conditions in Myanmar's northern Rakhine state before they are allowed to return voluntarily and in safety.

Myanmar and Bangladesh signed an initial agreement in November to repatriate the Rohingya, and the 30-member working group was set up last month to oversee the process.

Many have questions as to whether Rohingya would return to Myanmar under the current circumstances, and whether Myanmar would accept them.

Despite having lived in predominantly Buddhist Myanmar for generations, Rohingya Muslims have been denied citizenship, freedom of movement and access to basic social rights. They are generally called "Bengalis," a reference to the belief that they migrated illegally from Bangladesh.