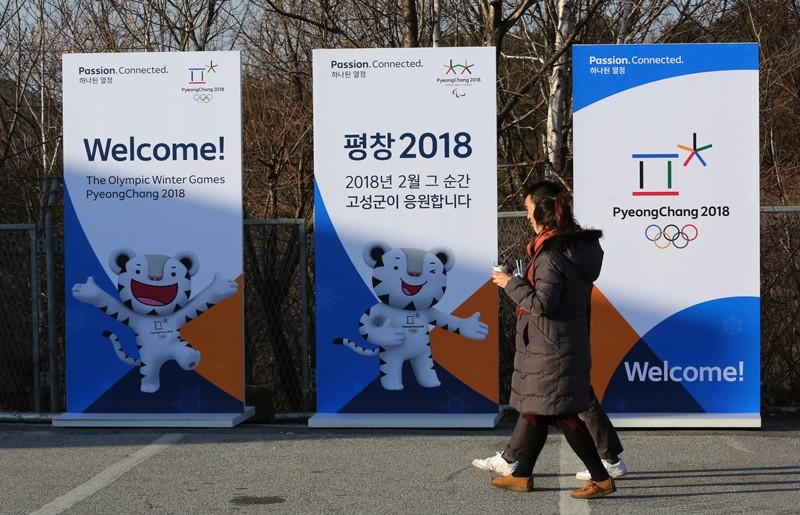 A couple passes posters showing the 2018 Pyeongchang Winter Olympic mascot at the Unification Observation post in Goseong, near the border with North Korea, South Korea (AP Photo)
by Compiled from Wire Services Jan 19, 2018 12:00 am

North Korea on Friday abruptly canceled plans to send a delegation led by the head of a hugely popular girl band to South Korea over the weekend to check preparations for a trip by a North Korean art troupe she also leads during next month's Pyeongchang Winter Olympics.

South Korea's Unification Ministry said North Korea didn't explain why it was "suspending" the two-day visit by the seven-member advance team that it proposed just hours earlier through a cross-border communication channel.

It wasn't immediately clear whether the visit, which was to begin on Saturday, was permanently canceled or postponed. The ministry said it will try to gather further information from the North regarding the decision.

It was unclear whether the cancellation cast any doubt over the preparations for the North's participation in the Winter Olympics in South Korea's Pyeongchang, an apparent diplomatic breakthrough after months of high tension over the North's nuclear and missile program.

The rival Koreas earlier this week agreed that the 140-member Samjiyon art troupe, which will include singers, dancers and orchestra members, will perform twice in South Korea during the games in a sign of warming ties between the countries. It will be part of a North Korean Olympic delegation that will also include athletes, officials, state media reporters, a cheering group and a taekwondo demonstration team.

South Korea has also proposed that it send a 12-member delegation to North Korea on Monday to inspect preparations for a joint cultural event at the North's scenic Diamond Mountain and a training session between non-Olympic skiers at the North's Masik ski resort ahead of the Olympics in the South, the ministry said.

Hyon has been the focus of intense South Korean media interest since she attended inter-Korean talks at the border on Monday that reached agreement on the troupe's visit. Hyon's gestures during the talks as well as her makeup, looks, navy blue suit and green shoulder bag received widespread coverage.

The reconciliation mood between the Koreas began after North Korean leader Kim Jong Un said in a New Year's speech that he was willing to send a delegation to the Olympics. While South Korea hopes to use the games to improve relations with its rival after a year of animosity involving North Korea's rapidly expanding nuclear weapons program, some experts view Kim's overture as an attempt to weaken U.S.-led international sanctions against the North and buy time to further advance his nuclear weapons program.

Hyon is also an alternate member of the ruling Workers' Party's Central Committee. Her visit would have made her the highest-profile North Korean to visit South Korea since its International Olympic Committee representative, Chang Ung, came last July.

The two Koreas have agreed to march together under a unification flag -- a pale blue silhouette of the Korean peninsula -- at the Games' opening ceremony on February 9, and to form a unified women's ice hockey team.

On Friday the Olympic flame passed through Daeseongdong, a tiny village inside the heavily fortified DMZ, where elementary school teacher Koo Hyun-Jin carried it with his pupils and told reporters: "This will give them a happy memory."

Officials of the two Koreas met at the nearby truce village of Panmunjom on Monday to discuss the art performances, when Hyon was the second most senior delegate of the North.

But the planning comes amid reports that North Korea could be preparing a lavish display of its military strength on the eve of the Games.

Diplomats have reportedly been invited to attend festivities in Pyongyang to mark the 70th anniversary of the founding of the North's regular army on February 8, a day before the Winter Olympics' opening ceremony.

There was no specific mention of a parade but Yonhap, quoting an unidentified government official, said Thursday that some 12,000 soldiers had been rehearsing with artillery pieces and other weapons at an airfield near the capital and could march through Kim Il-Sung Square.

The North's parades involve tens of thousands of people and take months to prepare, while Pyongyang is bitterly cold in February.

Analysts point out that satellite pictures of the airfield preparations appear to show far less activity than ahead of previous major displays, suggesting that a smaller event than usual could be in the works.

"It would look bizarre to have a military parade in Pyongyang, just a day before the opening of what the South has declared a 'Peace Olympics'", Ahn Chan-Il, an analyst at the World Institute for North Korea Studies, told AFP.

"But this fits the North's usual claim that it is prepared for both peace and a war", he added.