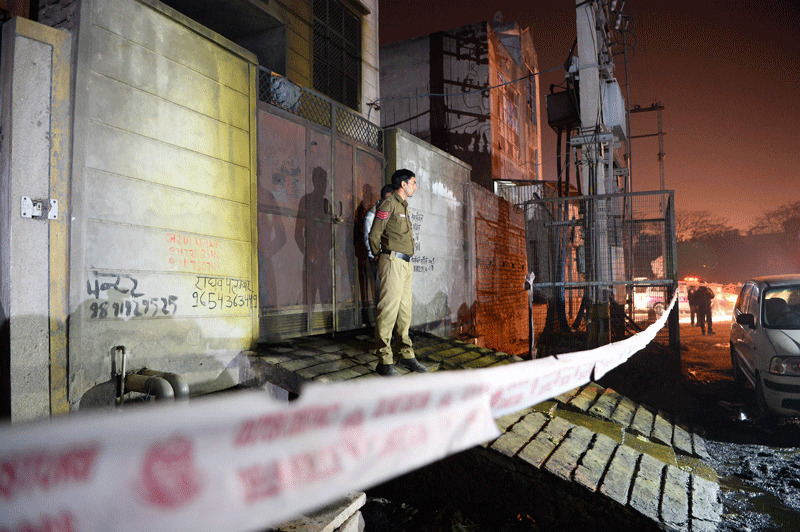 Police stand guard in front of a plastic factory in the Bawana industrial area on the northern edge of New Delhi on January 20, 2018 after a fire killed at least 17 workers. (AFP Photo)
by Compiled from Wire Services Jan 21, 2018 12:00 am

A man running a plastics warehouse in the Indian capital where 17 people, including 10 women, were killed in a fire, has been taken into custody, police said Sunday.

Preliminary investigations revealed that Manoj Jain had been running a repackaging unit in the two-storey building in the Bawana industrial area in what was registered as a plastics warehouse, Delhi Police spokesman Dependra Pathak said.

"Delhi Police has registered a case under Indian Penal Code 304, 285 and the Explosives Act and arrested the person who took this place on rent on January 1 and was doing this work illegally," Pathak said.

The charges are of negligence relating to fire and culpable homicide.

There were at least 20 to 25 workers in the building when the fire broke out Saturday evening on the ground floor and quickly spread to the upper floor and basement, fire official GC Mishra said.

The building had only one narrow staircase leading to one exit and most of the victims died of asphyxiation, while some from burn injuries.

While some people managed to escaped, two - a man and a woman - suffered fractures when they jumped from the terrace of the building to escape the fire, Mishra said.

There are fatal accidents nearly every year in India as people work in makeshift factories in the absence of proper safety standards.

In June of last year, 23 workers were killed when a blast occurred while they were producing firecrackers in Kheri village in the state of Madhya Pradesh in central India. The explosion triggered a blaze that engulfed the factory before firefighters put it out.

There were at least two fires in pubs and restaurants in Mumbai and one in Bangalore in the past month alone in which at least 20 died.

A total of 17,700 people died in accidental fires in India in 2015, according to the latest data available with the National Crime Records Bureau. One of the worst fires was at the Uphaar Cinema in Delhi in 1997, in which 59 people were killed and 103 injured.