18 injured as burning van slams into pedestrians in Shanghai 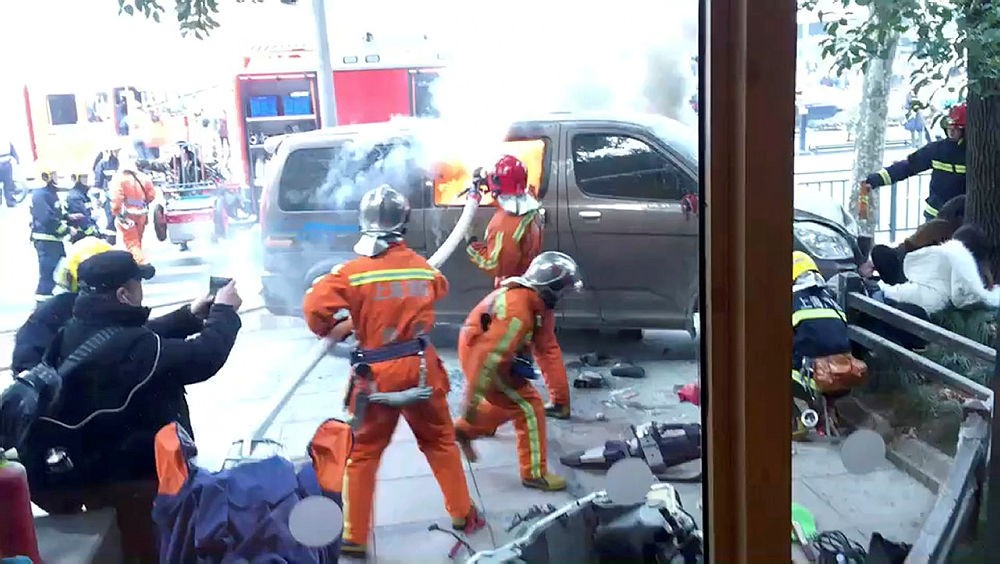 In this image taken from cellphone video provided to the Associated Press, firefighters put out a blaze after a minivan carrying gas tanks plowed into pedestrians along a street in Shanghai, Feb. 2, 2018. (AP Photo)
by French Press Agency - AFP
Feb 02, 2018 12:00 am

A van caught fire and plowed into pedestrians on a crowded pavement outside a Starbucks in central Shanghai on Friday, injuring at least 18 people, three of them seriously, authorities and witnesses said.

The incident occurred at People's Park in the heart of the city during morning rush hour, when crowds of people would have been on their way to work.

A Shanghai police statement said a preliminary investigation indicated that the driver of the van, a 40-year-old man who was among the injured, had been smoking at the wheel which apparently ignited "dangerous substances" inside the vehicle.

Zhang Sai, a security guard at an adjacent building, told AFP the van was on fire when it veered out of control and mounted the curb, striking pedestrians and sending others scurrying to get out of the way.

Xu Xin, a 23-year-old restaurant employee, came upon the immediate aftermath during his morning jog to find injured people on the ground and bystanders calling emergency services.

Portable gas tanks that are often used to fuel stoves were inside the vehicle, he said.

"The fire department carried gas tanks from the van, like those used in restaurants," Xu said.

The driver seemed unconscious while two other people in the van were badly burned, he added.

AFP journalists who arrived at the site found it had been quickly cleared by authorities.

A small police presence remained on hand standing watch. Damage to the fencing outside the Starbucks could be seen, but otherwise there was little evidence of an accident.

Other images showed a fire ablaze inside the van, which had come to a stop in front of a tree near the entrance to the Starbucks.

The coffee shop was locked up and a notice was taped to the door saying it had been closed, advising customers to go to other nearby outlets.

In 2013, two tourists were killed when a car rammed into bystanders on Beijing's iconic Tiananmen Square before bursting into flames.

Three attackers also died in the incident, which Beijing blamed on separatists from the restive western region of Xinjiang.