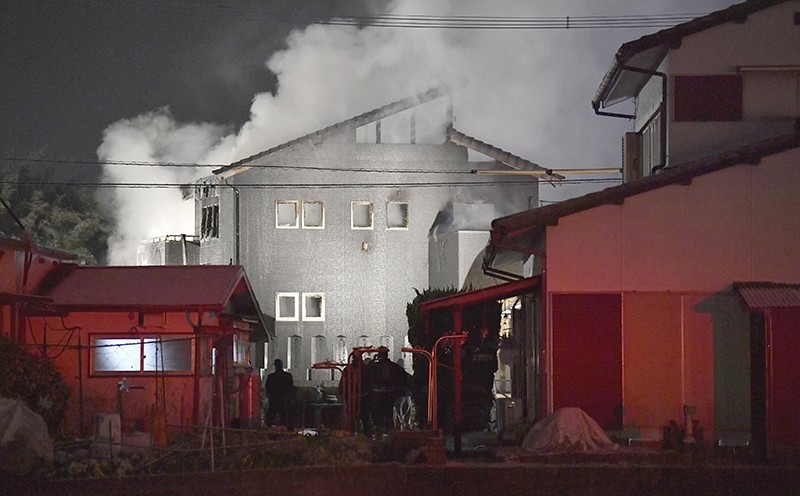 Smoke billows from the site where a Japanese military helicopter carrying two crewmembers crashed in Kanzaki, southwestern Japan on Monday, Feb. 5, 2018. (AP Photo)
by Compiled from Wire Services Feb 05, 2018 12:00 am

One crew member was confirmed dead and another was missing Monday after a Japanese military helicopter crashed in a residential area in the southwest of the country, reportedly injuring a local girl and setting a home on fire.

A 26-year-old co-pilot was found unconscious following the crash in the town of Kanzaki and later confirmed dead, a defense ministry spokesman said.

"We are still searching for the 43-year-old pilot," the spokesman told the French Press Agency, retracting earlier remarks made by Defense Minister Itsunori Onodera, who said both crew members on board were retrieved "in a state of cardiac and respiratory arrest."

That language is often used by Japanese officials before deaths are officially confirmed.

Quoting local fire department officials, the Asahi Shimbun daily said an 11-year-old girl who was in the house when the helicopter crashed was sent to hospital after injuring her knee.

Japan's NHK television showed a thick plume of gray smoke rising from the site of the crash in between the rooftops of local houses, some 300 meters (1,000 feet) away from an elementary school.

The local fire authority said it had sent 14 fire engines and three ambulances to the site.

The Boeing AH-64 attack helicopter belonging to the military's Metabaru training camp in Saga prefecture crashed in the area, 4 kilometers south of the camp, at 4:43 pm (0743 GMT), Onodera said.

The helicopter was believed to have nose-dived into the house when flying west, the minister added.

Prime Minister Shinzo Abe ordered the grounding of all 12 choppers of the same type and urged Onodera to conduct a thorough investigation into the cause of the accident, broadcaster NHK reported.

Monday's accident comes after a series of emergency landings and other incidents involving the U.S. military on the southern island of Okinawa.

The incident revived memories of a 2016 crash in which a Japanese air force jet with six people aboard went missing in mountainous terrain. Four bodies were later recovered.