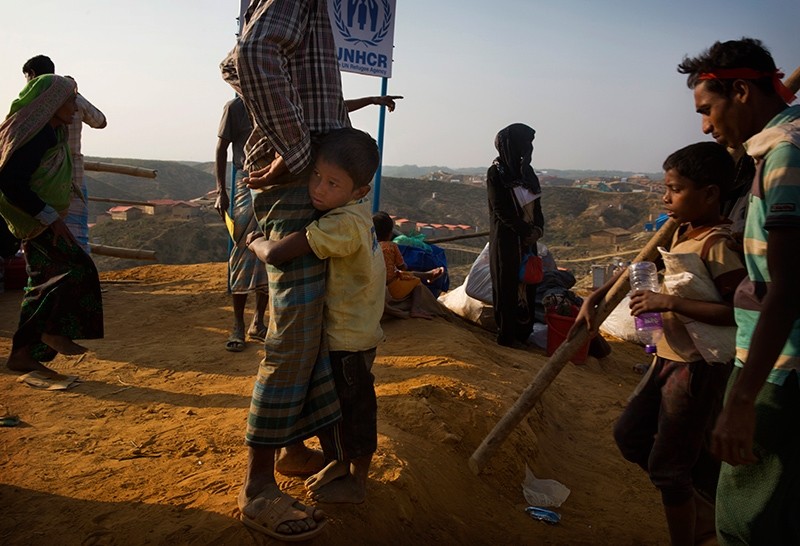 A Rohingya refugee boy who was staying in a no-man's land at Bandarban between Myanmar and Bangladesh border, clings to his father after arriving at the Balukhali refugee camp, 50 km from Cox's Bazar, Bangladesh, Jan. 24, 2018. (AP Photo)
by Compiled from Wire Services Feb 05, 2018 12:00 am

The U.N.'s human rights chief has warned that Myanmar's persecution of the Rohingya Muslim minority has the potential to spark regional conflict.

Zeid Ra'ad al-Hussein reiterated while in Indonesia on Monday that acts of genocide and ethnic cleansing may have occurred in the campaign of violence against Rohingya that sparked an exodus of nearly 1 million people to neighboring Bangladesh.

"Myanmar faces a very serious crisis with a potentially severe impact on the security of the region," Zaid said in a speech to a rights conference at Indonesia's Ministry of Foreign Affairs.

"It is sometimes said that today's human rights violations will become tomorrow's conflicts," he said. "If the Rohingya crisis were to spark a broader conflict based on religious identities, the ensuing disputes could be a cause for great alarm."

His remarks follow the publication of a report last week about mass graves of Rohingya in Myanmar's crisis-hit Rakhine state, where government troops have been accused of waging an ethnic cleansing campaign against the minority.

The government of predominantly Buddhist Myanmar denies any atrocities have taken place and insists Rohingya are illegal immigrants.

But it had repeatedly blocked reporters and U.N. investigators from independently accessing the conflict zone and investigating refugee claims about a genocide.

Zeid said Myanmar had enjoyed strong growth including a focus on socio-economic development in the Rakhine region, but that this could not mask "institutionalized discrimination" against the minority.

The U.N. rights chief is due to meet with Indonesian President Joko Widodo as well as top government officials and rights groups during his three-day visit.