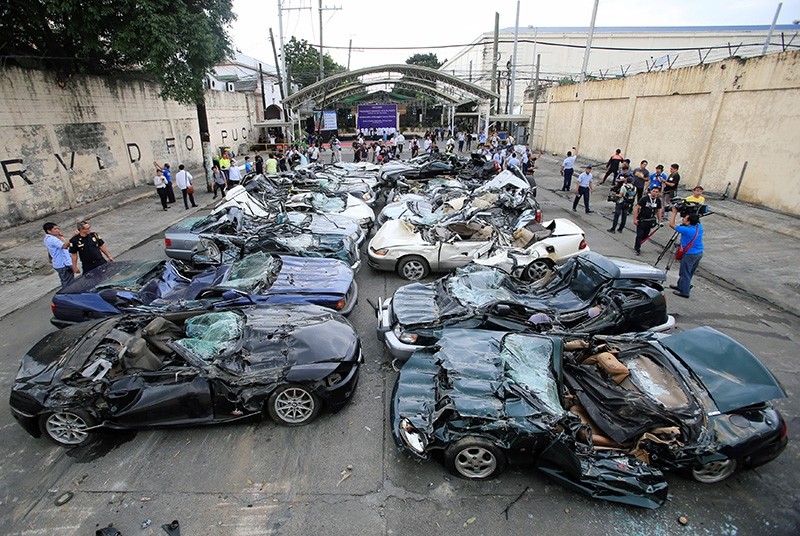 Bulldozers and backhoes pounded more than two dozen seized luxury cars in the Philippines on Tuesday, including Porsches, Mercedes, Jaguars and Corvettes, in a dramatic demolition showcasing the no-nonsense leader's crackdown on crime and corruption.

President Rodrigo Duterte watched as the second-hand vehicles, some valued as high as $115,000, were reduced to piles of scrap in a little over three minutes.

"Give it to the buyer of steel," Duterte said, recalling his instruction to officials.

"They cannot have cars like that. But they can get something, make toys out of it."

The Bureau of Customs seized $2.93 million worth of smuggled vehicles last year, part of the $866 million in seized goods, government data showed.

"It does not pay to evade taxes in the Philippines so might as well stop trying, because you will never succeed," Duterte's finance minister, Carlos Dominguez, told reporters before letting diggers loose on 20 slick-looking vehicles at a Manila port. A further 10 were simultaneously destroyed in ports in the southern cities of Davao and Cebu.

Duterte, known for his bloody war on drugs and disdain for criminals, has promised to usher in a "golden age of infrastructure" over six years, worth $180 billion. He has launched a comprehensive tax reform programme to help fund it.