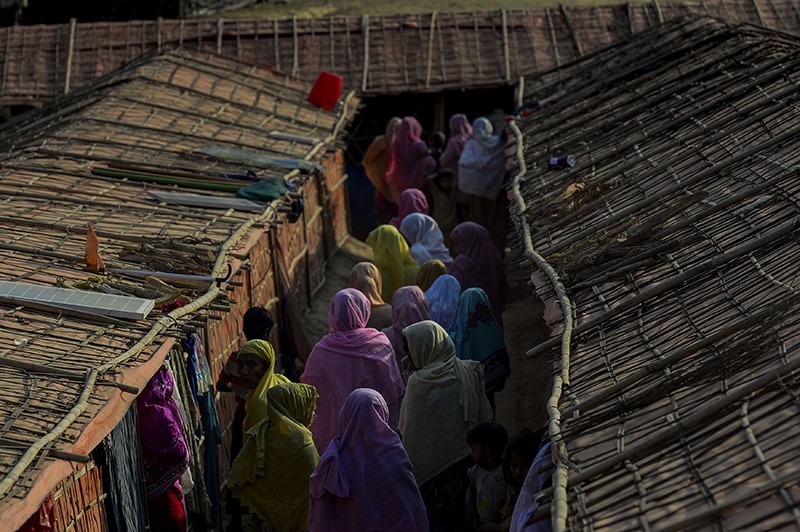 This Jan. 26, 2018 photograph shows Rohingya women walking inside the ,widow's camp, at the Balukhali refugee camp in Bangladesh's Ukhia district. (AFP Photo)
by Compiled from Wire Services Feb 06, 2018 12:00 am

During his conversation with President Joko Widodo in the capital Jakarta, U.N. High Commissioner for Human Rights Zeid Ra'ad al-Hussein praised Indonesia's role in providing assistance to the Rohingya refugees, an Indonesian official said after their closed-door meeting.

According to the Indonesian Human Rights Minister Yasonna Laoly, Zeid also said he believes Indonesia could lead and mediate resolution attempts between the Rohingya and Myanmar.

"Indonesia is one of the countries Myanmar welcomes with open arms," Laoly said.

Widodo and Zeid also discussed at length the situation at the Cox's Bazaar refugee camp in Bangladesh.

Widodo last month visited Cox's Bazaar to deliver 10.5 tons of aid from Indonesia. He said Indonesia has been "consistent" in helping the Rohingya since last September, when it sent out 34 tons of aid in the form of food, blankets and medicines.

In addition, the Indonesian Humanitarian Alliance as well as several other humanitarian agencies have also set up camp at the settlement.

Zeid reportedly said he hopes Indonesia can act as a role model to the world, in line with its status as the largest Muslim-majority democracy.

Ministers from the 10-member Association of Southeast Asian Nations also called for the speedy and safe return of displaced people to Myanmar following an agreement signed between Yangon and Bangladesh in November.

They also stressed the need to find a "comprehensive and durable solution" to address the root causes of the conflict but acknowledged there is no quick fix, Singapore Foreign Minister Vivian Balakrishnan said after the informal talks, the ministers' first meeting under Singapore's chairmanship.

"ASEAN is fully committed to assist the Myanmar government in humanitarian response but ultimately, what we need is a long-term political solution," he said.

More than 650,000 refugees, mostly children and women, have fled Myanmar since Aug. 25, 2017 when Myanmar forces launched a bloody crackdown.

In a December report, the humanitarian organization said the deaths of 71.7 percent or 6,700 Rohingya were caused by violence. They include 730 children below the age of 5.

The U.N. has documented mass gang rapes, killings — including of infants and young children — brutal beatings and disappearances committed by security personnel. In a report, U.N. investigators said such violations may have constituted crimes against humanity.