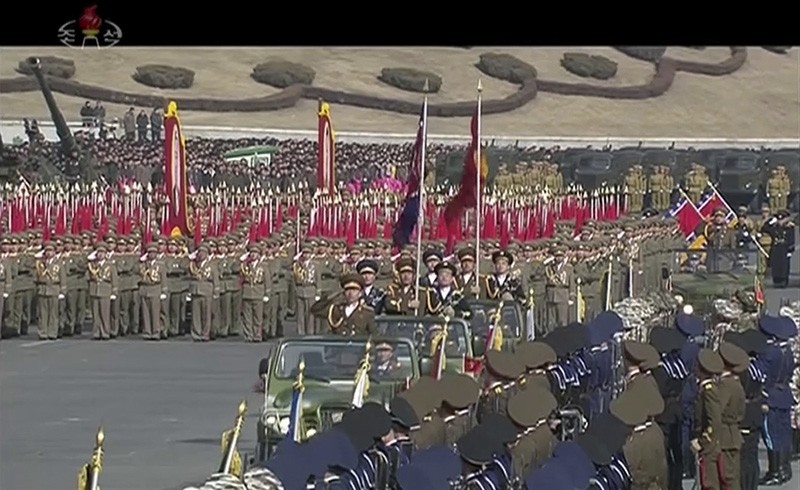 North Korea staged a military parade in Pyongyang Thursday to mark the 70th anniversary of its armed forces, putting its intercontinental ballistic missiles on show just a day before the Winter Olympics open in the South.

The nuclear-armed North is on an Olympics-linked charm offensive -- sending a troupe of performers, hundreds of female cheerleaders, and the sister of leader Kim Jong Un to South Korea.

But regiments of soldiers goose-stepped in formation through Kim Il Sung Square Thursday, followed by trucks, artillery, tanks and finally four giant Hwasong-15 ICBMs -- as well as a band forming the Korean word for "Victory."

Unlike the North's last parade in April 2017 state television did not show the event live, instead airing it hours later.

Fireworks went off as leader Kim Jong Un took his place on the rostrum to watch the display, along with his wife Ri Sol Ju and ceremonial head of state Kim Yong Nam -- who will head Pyongyang's delegation to the Olympics Friday.

"We ... have become capable of showcasing our stature as a world-class military power to the world," said Kim, wearing a long black coat and black fedora.

The military should remain on high alert to ensure that invaders could not violate the North's sovereignty "even by 0.001mm," he said.

"Long live!" cried the assembled troops, their breath condensing in the subzero temperatures and some of them in tears at the sight of the leader.

Analysts say that with the dual approach, the North is looking to normalize its status as a "de facto nuclear state," and could be trying to weaken sanctions against it or drive a wedge between the South and its ally the U.S.

North Korea is under multiple sets of U.N. Security Council sanctions over its banned nuclear weapons and ballistic missile programs, which have seen it develop rockets capable of reaching the U.S. mainland.

Pyongyang last month announced it was changing the date of its military commemoration from April 25 to Feb. 8 -- the day before the Games' opening ceremony in Pyeongchang, just 80 kilometers (50 miles) south of the Demilitarized Zone (DMZ) that divides the peninsula.

North Korea normally invites hundreds of foreign journalists to show off the spectacle to the world but did not do so this time, possibly an indication that it wanted to control how the display is seen -- which would be in keeping with the absence of live coverage.

"It looks like North Korea had potential reaction from the international community in mind and toned down the scale and message of the event a lot," said Lim Eul-Chul, a North Korean studies professor at Kyungnam University.

The North's high-level delegation for the Olympics is being led by Kim Yong Nam, the highest-level official ever to visit the South, and also includes Kim Jong Un's sister Kim Yo Jong -- an increasingly powerful and influential figure.

They are due in the South Friday and Seoul's presidential Blue House said they will have lunch with President Moon Jae-in the following day.

U.S. Vice President Mike Pence arrived in the South Thursday and is also scheduled to attend the opening ceremony in Pyeongchang Friday.

That could put him in the same room as Kim Yong Nam, raising the prospect of senior figures from the two sides meeting after a year in which their leaders traded personal insults and threats of war.

But his comments did not rule out a meeting -- and nor has Pence, who lambasted the North Thursday but added: "There may be a possibility for any kind of an encounter with North Koreans," whether informal or a meeting.

"We'll have to wait and see exactly how that unfolds."

The Winter Olympics have triggered a rapid rapprochement on the peninsula, although analysts warn that warmer relations may not last long beyond the Games.

Tensions soared last year as the North carried out multiple weapons tests, including the Hwasong-15 capable of reaching the U.S. mainland, and by far its most powerful nuclear test to date.

For months Pyongyang ignored Seoul's entreaties to take part in a "peace Olympics" until Kim indicated his willingness to do so in his New Year speech.

That set off a rapid series of meetings which saw the two Koreas agree to march together at the opening ceremony and form a unified women's ice hockey team, their first for 27 years.

But critics in the South say Seoul has made too many concessions to Pyongyang, and demonstrators protested Thursday as a North Korean orchestra gave a sold-out performance in Gangneung, which is hosting Olympic events.

But others were making the most of the rare event.

"I think it will be a once-in-a-lifetime opportunity unless we are reunified," said Kim Mi-sook, who attended the concert with her husband.