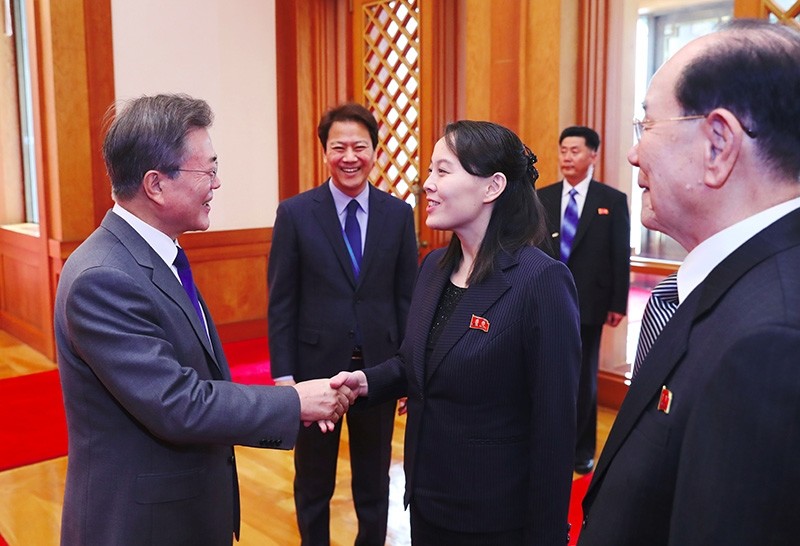 The invitation, delivered by Kim's visiting sister Kim Yo Jong, said Kim was willing to meet the South's leader "at the earliest date possible", said a spokesman for the presidential Blue House.

An inter-Korean summit would be the third of its kind, after Kim's father and predecessor Kim Jong Il met the South's Kim Dae-jung and Roh Moo-hyun in 2000 and 2007 respectively, both of them in Pyongyang.

After months of silence on whether it would even take part in the Pyeongchang Winter Olympics in the South, which had their opening ceremony Friday, nuclear-armed North Korea has gone on a charm offensive, dispatching athletes, performers and Kim's sister plus other diplomatic delegates to the South.

Moon met Kim Yo Jong and the North's ceremonial head of state Kim Yong Nam for talks and lunch at the Blue House on Saturday.

She verbally conveyed Kim's invitation to Moon "to visit the North at his most convenient time", he added.

Moon has long argued for engagement with the North to bring it to the negotiating table over its nuclear ambitions, but did not immediately accept the offer.

Moon called for efforts to "create the right conditions to realize" such a visit, his spokesman said, urging Pyongyang to more actively seek dialogue with the US.

"It is absolutely necessary for the North and the United States to engage in talks at an early date," he cited Moon as saying.

Washington has long insisted the North must show a willingness to denuclearize before any negotiations -- which Pyongyang says it will never do.