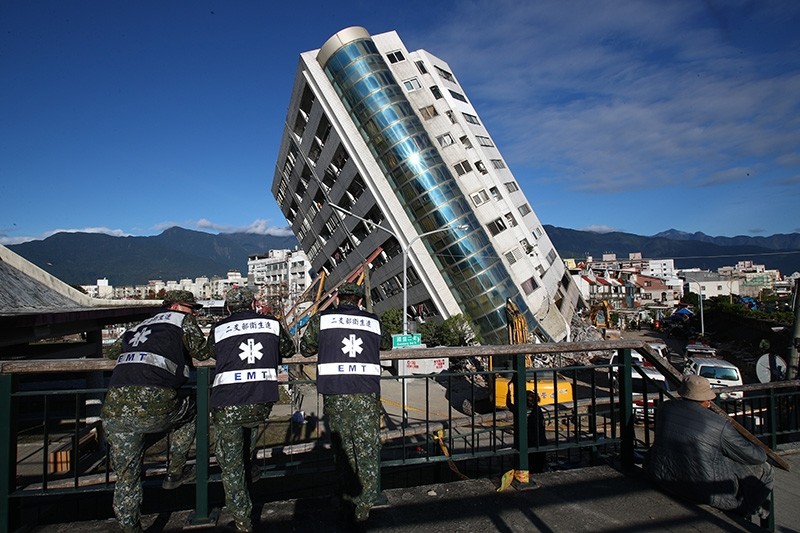 Emergency response team standby as engineers inspects a building damaged by an earthquake in Hualien, eastern Taiwan, 10 February 2018. (EPA Photo)
by Feb 10, 2018 12:00 am

The bodies of two victims of this week's devastating earthquake in Taiwan were found on Saturday in a partially collapsed building, with the overall death toll reaching at least 14 with three people still missing, authorities said.

The bodies of a man and a boy were pulled from the rubble. They were among the last five people known to be missing beneath the rubble of the 12-storey commercial and residential complex in the eastern coastal city of Hualien, the Central Emergency Operation Centre (CEOC) said Saturday.

The five victims included a 12-year-old boy, his parents and maternal grandparents. They were staying at the Beauty Inn, when the quake caused the building to tilt, squashing the lower four floors, Taiwan's state-run Central News Agency reported.

Earlier this week, the bodies of a Canadian couple, four Chinese tourists, a Taiwanese tourist, and a hotel employee were found in the hotel's wreckage.

In the same building, a Filipino caretaker was found dead late Thursday, while three other people were found in the rubble of Hualien.

At least 280 people were injured across the city and four tall buildings partially collapsed in Tuesday's magnitude-6.0 earthquake, which was followed by more than 270 aftershocks. A seriously injured patient remained critical in a Hualien hospital, CEOC said early Saturday.

Prosecutors in Hualien said Friday that a probe had been launched to determine if human error contributed to the partial collapse of the buildings.