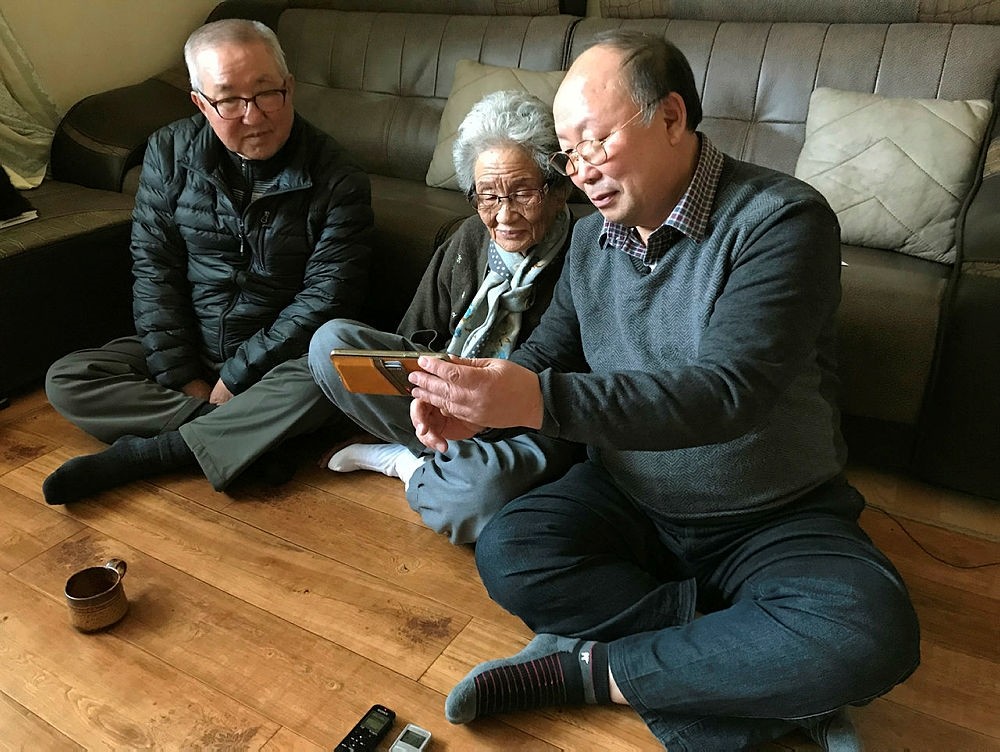 Kang Hwa-seon, center, sits with her nephew Song Yong-geun, left, and her son Song Young-jin at her home in Gangneung, South Korea, looking at pictures of a 2015 family reunion she had with her brother-in-law. (AP Photo)
by Associated Press Feb 16, 2018 12:00 am

When Kang Hwa-seon married into a family that lived in a thatched house in this eastern coastal city in the early 1940s, she was in essence a mother to her little brother-in-law. She fed him, took him to school, watched him grow into a handsome boy who carried her baby daughter on his shoulder.

Then, during the Korean War, they were pulled apart.

In late 2015, she traveled to the North and tearfully reunited with her brother-in-law. By then, Song Dong Ho was an 81-year-old man with a gaunt, wrinkled face. They met under now-dormant family reunion programs that the two Koreas hold when relations are good. Since then, she's had no word from him.

Recently, however, her hopes for a second meeting have grown. South Korea's first Winter Olympics — unfolding in her neighborhood, of all places — have caused the Koreas to ease animosities and cooperate after a period of heightened nuclear tension that triggered fears of a second Korean War.

"I just want to see him one last time before I die," Kang, 93, said during an interview at her traditional tile-roof house in Gangneung, on the same site where that thatched house once stood. "He was like my son or a little brother."

During the 1950-53 Korean War, uncounted families were completely separated. Only a portion have been allowed to reunite with long-lost relatives, albeit briefly, under humanitarian programs that began in 2000.

Reunions are deeply emotional, often pegged to a ticking clock. Most people who apply are in their 70s at least, and they don't know if loved ones are still alive. Both governments prohibit their citizens from exchanging phone calls, letters or emails.

It's not clear if the current inclination toward rapprochement will last after the Olympics end on Feb. 25 and help restart reunion programs.

Animosities could easily flare again once Seoul and Washington launch their delayed springtime massive military drills, which Pyongyang views as an invasion rehearsal.

But some say North Korea is serious about its outreach this time. They cite a slew of unusual steps: a joint march with South Korea during the Winter Games' opening ceremony; the formation of a combined Korean women's hockey team; and the dispatching of leader Kim Jong Un's sister as part of an Olympic delegation.

South Korea wants full-fledged, regular reunions, but North Korea has used the programs in the past as a way to win aid and concessions from the South. Experts say the North also worries expanded reunions would expose its citizens to influence from the more affluent South.

Past reunions typically involved hundreds of Koreans at the North's Diamond Mountain resort. The techniques of choosing participants differed: Seoul used a computerized lottery system, while the North reportedly picked citizens loyal to the Kim family's leadership. No Korean has ever gotten a second chance to meet a relative.

Before their 2015 meeting, the Koreas' most recent reunion program, Kang's family held a memorial service for Song every year because they thought him long dead. They said they heard from various people that he was conscripted into the North's army while on the way to school in the early months of the war, and that his unit was destroyed by American bombing.

But it was Song who looked for Kang's family before the 2015 reunion.

By then, Song's parents and elder brother (Kang's husband) and the daughter Song had so enjoyed mounting on his shoulder — all of whom lived at the Gangneung house — had died. So Kang went to the North Korean mountain with her children who had never seen him and a nephew who remembered him as a boy.

"It was like meeting a man who had been dead," Kang says. "He left us when he was young ... Then I met him again when he became an old man with white hair. But he still resembles my mother-in-law so much, who was very beautiful."

Kang's 63-year-old son, Song Young-jin, attended that meeting and became attached to the uncle he never thought much about. "We want to see him 10 more times," he says.

Kang's neighbor Kwon Sun Ku, 76, met his elder brother for three days at the Diamond Mountain in 2005. He learned that his brother Kwon Sun Oh, who disappeared during the war, had been living on the northern side of the divided Gangwon province, to which Gangneung city belongs. It would probably take an hour or so by car to reach his brother's place if there was no mine-strewn 4-kilometer (2.5-mile)-wide border.

"I want to exchange letters with him and meet him to find how he's been doing since lots of things have changed over the years," Kwon says.

Kwon said it was difficult to have "real conversations" with his brother, who he recalled answered incoherently because of worry about being monitored. But it was still a tearful reunion with a man who shared his family's thick eyebrows and gave Kwon a ride on his bicycle to a hospital for seven months to treat bone cancer on his leg.

"I showed my scars on the leg to him ... and I told him that 'Brother, this is why I cannot forget you,'" Kwon says.

During Kang's reunion, Song asked about an English-Korean dictionary he used at school, something that not every student possessed at the time. After returning home, her family found they still have the dictionary with his name written on the cover. Kang's son said he would give it to Song if they are allowed to meet him again.

The last time Kang saw Song, in 2015, he had boarded on the bus to go home. He extended his hands out the window to hold hers. He wept. And the bus drove off.

Kang's family built their current tile-roofed house after tearing down the old thatched house. But other than that, they say, not much has changed since Song lived here. The old walnut tree is still in the front yard, and the foliage on the hill behind the house is the same.

"I want him to stay overnight here," Kang says. "I want to make meals for him and tell him how we've lived."