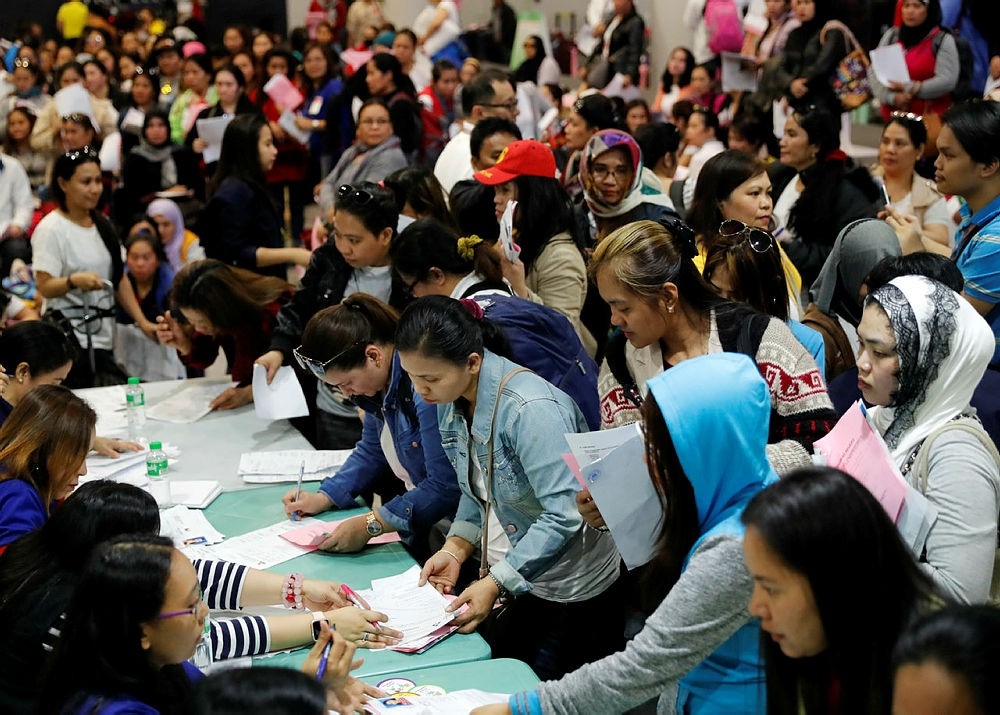 Filipino household workers who were repatriated from Kuwait show their documents as they arrive at Manila's international airport, Philippines, 21 February 2018. (EPA Photo)
by reuters Feb 22, 2018 12:00 am

Philippine President Rodrigo Duterte said on Thursday he would extend his ban on sending workers to Kuwait to include other countries if investigations showed Filipinos were being seriously abused by employers elsewhere.

The Southeast Asian country has suspended the deployment of workers to the Gulf state since last month after Duterte said the abuse was unchecked and had driven several Filipino domestic helpers there to suicide.

"We are doing an audit now (to) find out the places where we deploy Filipinos and our countrymen suffer brutal treatment and human degradation," Duterte said in the central province of Iloilo.

He was visiting the wake of a Filipino whose body was found this month in a freezer at an abandoned apartment in Kuwait, with signs of torture.

The killing was the final straw for Duterte, who asked commercial airlines to help the voluntary repatriation of workers from Kuwait. The Philippine Senate began an inquiry on Wednesday into deaths and abuse of Filipino workers.

More than 2 million Filipinos are working in Kuwait and other Middle East countries, including Qatar, Bahrain, United Arab Emirates and Saudi Arabia, but many cases of abuse have also been reported elsewhere.

Kuwait has sought to mend diplomatic ties by inviting Duterte to visit, its state news agency KUNA said on Monday. The Philippine labour ministry wants Kuwait to be able to assure safety of Filipinos before the ban can be lifted.

Duterte said a list of both reported and unreported cases of mistreatment of Filipino migrant workers would be prepared, which he described as "a long, long task", without mentioning any timetable. He said he would not speculate on the countries to which the worker ban could be extended.

Duterte has said his long-term aim is to slow the exodus abroad by boosting the domestic economy and creating jobs that provide workers with sufficient income.