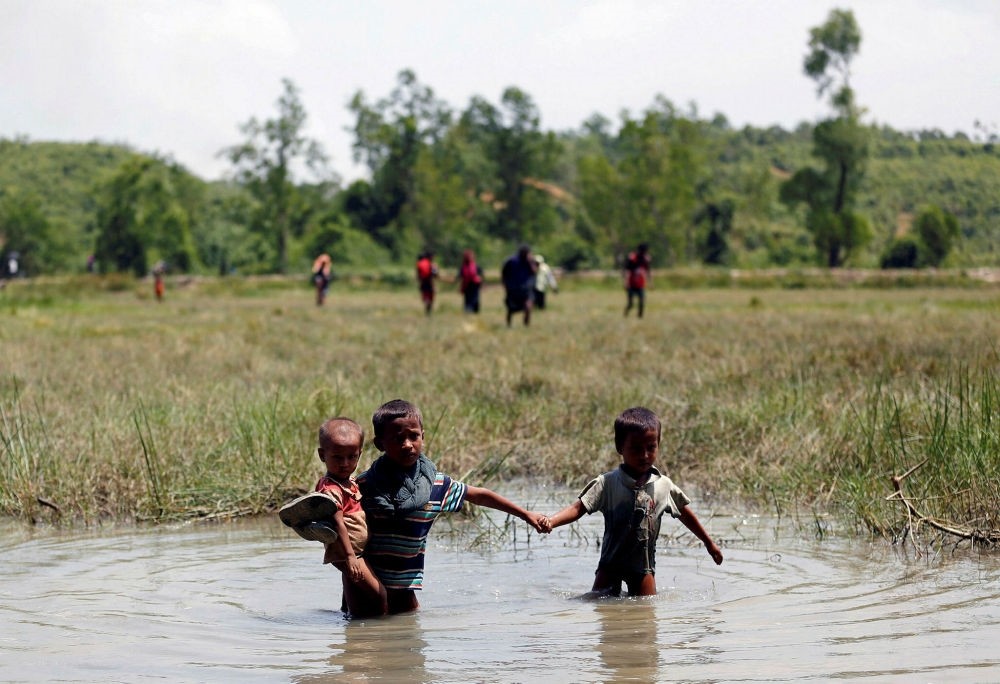 Rohingya children make their way through water as they try to reach the Bangladeshi side from no man's land.
by Compiled from Wire Services Mar 02, 2018 12:00 am

Bangladesh will send a protest note to Myanmar over an increased security presence near a portion of their border where thousands of Rohingya Muslims have been sheltering just inside Myanmar, a Bangladeshi border guard official said yesterday.

Myanmar armed soldiers and police, estimated to number more than 200, came to the border fence and appeared to be moving heavy weapons, including mortars, to the area, said a Bangladeshi army official and the two guards, all three of whom spoke on the condition of anonymity.

"We are sending them a protest note. We have already asked for a flag meeting," said Rahman, the force's additional director general in charge of operations, referring to a meeting of border guards of both countries. "They removed heavy weapons, such as machine guns and mortars, from the area after our verbal protests."

Dil Mohammed, a community leader among the roughly 950 Rohingya families still staying at the border, told Reuters that Myanmar officials used loudspeakers to tell them to move from the area. "Most of the Rohingya in the camps now want to flee and take shelter in Bangladesh," Mohammad told Agence France-Presse (AFP).

The United Nations Refugee Agency has expressed concern that thousands of people staying on the strip of land dubbed "no man's land," laying just beyond Myanmar's border fence but on Myanmar's side of a creek marking the international border, would be forcibly returned without sufficient consideration for their safety.

In November, Myanmar and Bangladesh signed an agreement to gradually repatriate Rohingya with "safety, security and dignity," but the process has been delayed in part because of security concerns. Bangladesh says it will not repatriate any Rohingya against their will but wants the international community to continue to pressure Myanmar to create conditions for a sustainable repatriation.

Rohingya leaders bluntly refuse to return. The U.N. says anyone who goes back must be a volunteer, while Myanmar shows no sign of accepting Rohingya as full citizens.

At least 9,000 Rohingya were killed in Rakhine state from Aug. 25 to Sept. 24, according to Doctors without Borders. In a report last December, the global humanitarian group said the deaths of 71.7 percent, or 6,700 Rohingya, were caused by violence. The death toll includes 730 children below the age of 5. The U.N. has described the systematic violence by Myanmar against Rohingya Muslims in Rakhine state as possible genocide and ethnic cleansing but has stopped short of outright accusing the army of war crimes.

Three peace prize laureates who met with Rohingya Muslims in sprawling refugee camps accused fellow Nobel recipient Aung San Suu Kyi and Myanmar's military of committing genocide in the deadly violence that forced hundreds of thousands to flee into Bangladesh. Suu Kyi does not oversee her country's military or its security operations that set off the refugee exodus, but the laureates said as one of Myanmar's leader, she cannot avoid responsibility.

The stateless Rohingya have been the target of communal violence and vicious anti-Muslim sentiment in mainly Buddhist Myanmar for years. Myanmar has denied citizenship to Rohingya since 1982 and excludes them from the 135 ethnic groups it officially recognizes, which effectively renders them stateless.