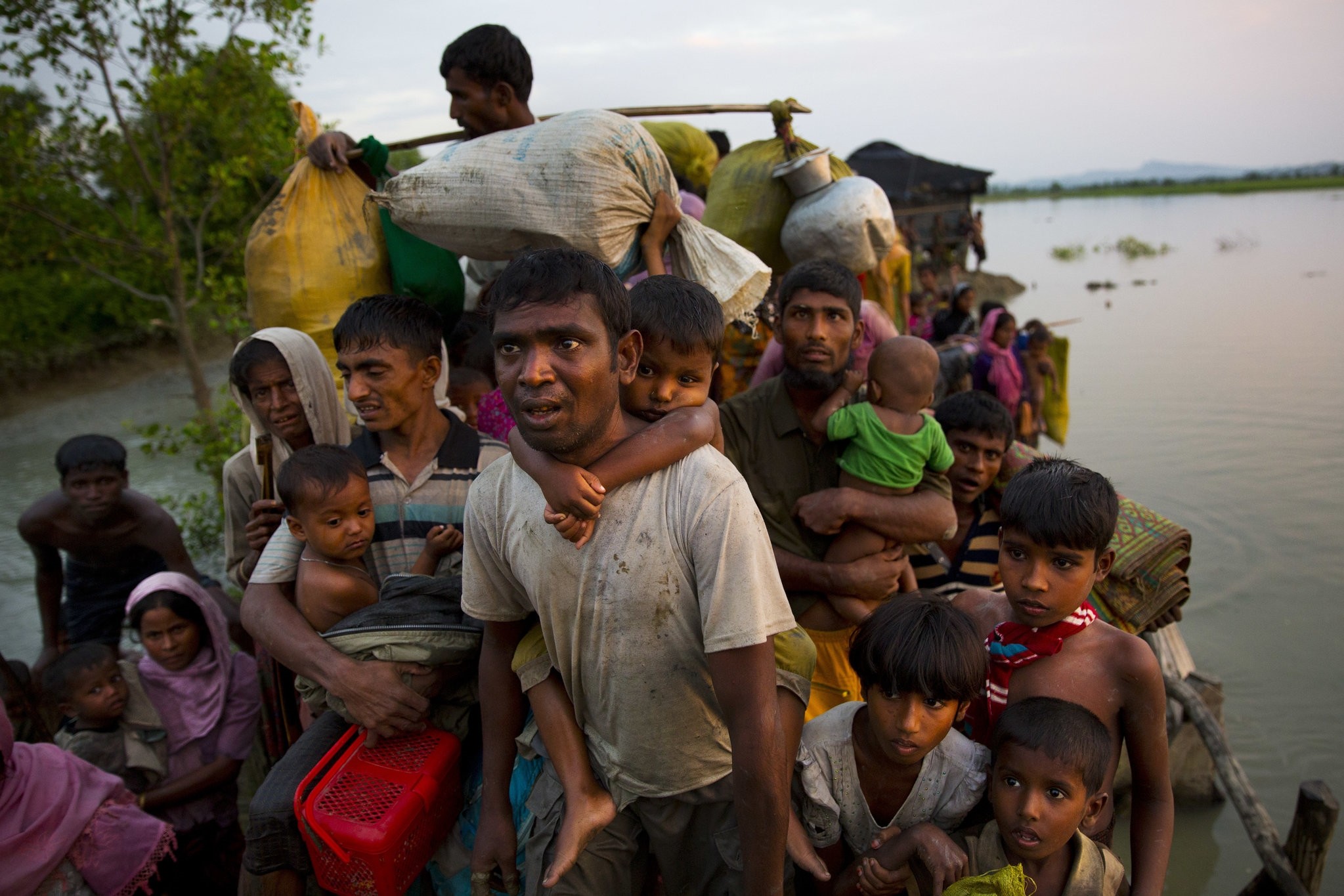 n this Nov. 1, 2017, file photo, Rohingya Muslims carry their young children and belongings after crossing the border from Myanmar into Bangladesh, near Palong Khali, Bangladesh (AP Photo)
by Compiled from Wire Services Mar 06, 2018 12:00 am

Six months after a military crackdown sparked a mass exodus of the Rohingya Muslims, Myanmar is continuing its ethnic cleansing in Rakhine state, UN says

"The ethnic cleansing of Rohingya from Myanmar continues. I don't think we can draw any other conclusion from what I have seen and heard in Cox's Bazar," U.N. Assistant Secretary-General for Human Rights Andrew Gilmour said after speaking to newly-arrived Rohingya in Bangladesh's crowded refugee camps, as reported by AFP.

"The nature of the violence has changed from the frenzied blood-letting and mass rape of last year to a lower intensity campaign of terror and forced starvation that seems to be designed to drive the remaining Rohingya from their homes and into Bangladesh," he said in a statement, adding that new arrivals are travelling from interior Rakhine towns further from the border.

His statement also said it was "inconceivable" that any Rohingya would be able to return to Myanmar in the near future, despite Myanmar's pledges to start taking back some refugees.

"The Government of Myanmar is busy telling the world that it is ready to receive Rohingya returnees, while at the same time its forces are continuing to drive them into Bangladesh," Gilmour said. Despite Myanmar saying it was ready to accept back refugees under a pact signed with Bangladesh in November, he added, "Safe, dignified and sustainable returns are, of course, impossible under current conditions".

Bangladesh has reached an agreement with Myanmar to send back the around 750,000 refugees who have arrived since October 2016 over the next two years, a process set to begin as early as next week. But many Rohingya living in the crowded, unsanitary camps have said they do not want to return to Rakhine after fleeing atrocities including murder, rape and arson attacks on their homes. Rights groups and the U.N. say any repatriation must be voluntary. They have also expressed concerns about conditions in Myanmar, where many Rohingya settlements have been burned to the ground by soldiers and Buddhist mobs.

Rohingya who sought shelter in Bangladesh have reported rape, killings and arson by security forces. The United Nations and United States have concluded the campaign amounted to ethnic cleansing.

Separately, the U.N. refugee agency, UNHCR, said it was concerned about people living just inside Myanmar at its border with Bangladesh.

The office of the United Nations High Commissioner for Refugees is monitoring developments after several thousand people living in a makeshift camp "were reportedly ordered to vacate the area by the Myanmar authorities", the agency said.

Residents of what is called "no-man's land", as it sits outside Myanmar's border fence but on its side of a creek that separates the two countries, say Myanmar officials have warned them on loudspeakers that their presence on the border line is illegal.

"UNHCR underscores that everyone has the right to seek asylum, just as they also have the right to return home when they deem the time and circumstances right," it said in a statement late on Monday, according to Reuters.

"People who have fled violence in their country must be granted safety and protection and any decision to return must be voluntary and based upon a free and informed choice."

Zaw Htay said Myanmar had the right to move people from its territory and part of an agreed "buffer zone" with Bangladesh. Authorities had received information that "terrorists" linked to the August attacks on Myanmar's security posts were sheltering there, he added.

"According to procedure security forces have to clear the area for security reasons," he said.

Zaw Htay said he believed the people were staying on the border to "trap" Myanmar into conducting a "clearance operation", which he said media and the United Nations would label as ethnic cleansing.