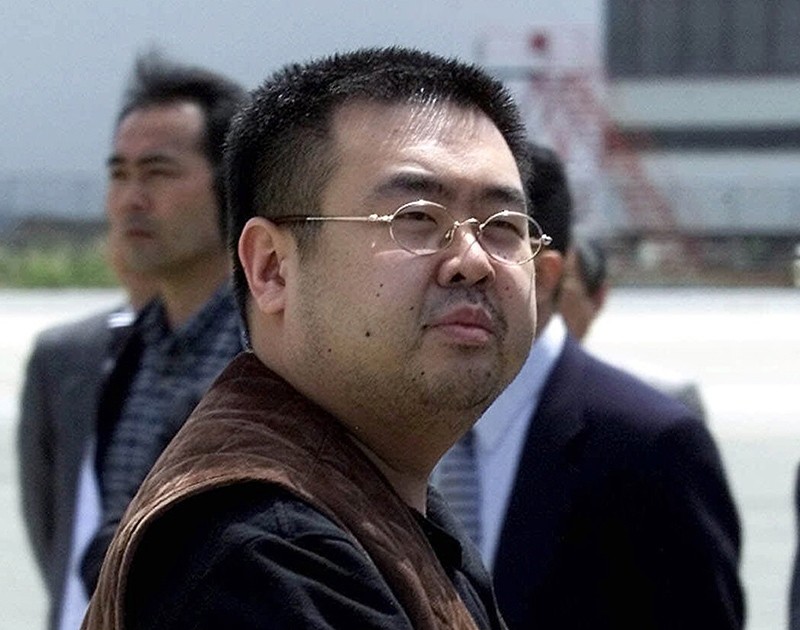 In this May 4, 2001, file photo, Kim Jong Nam, the eldest son of then North Korean leader Kim Jong Il, looks at a battery of photographers as prepares to board a plane to Beijing at an airport in Narita, northeast of Tokyo, Japan. (AP Photo)
by Mar 07, 2018 12:00 am

Kim Jong Nam died in February last year, shortly after two women sprayed his face with a liquid as he walked through Kuala Lumpur airport.

The two women, an Indonesian and a Vietnamese national, are currently on trial in Malaysia where they are accused of using a nerve agent to murder Kim Jong Nam, who lived in exile in China and was seen as a potential rival to his younger half-brother.

The two women say they were recruited to take part in what they thought were prank TV shows but were instead tricked into becoming inadvertent assassins, in an elaborate plot by a group of North Korean agents who then fled country.

On Tuesday, Washington announced it had formally concluded that VX — an extremely powerful nerve agent — was used to conduct the slaying and that North Korea was to blame.

"This public display of contempt for universal norms against chemical weapons use further demonstrates the reckless nature of North Korea and underscores that we cannot afford to tolerate a North Korean WMD program of any kind," she added.

The statement gave no details or evidence on how the U.S. had come to their conclusion.

The finding triggered another layer of U.S. economic sanctions against Pyongyang, just as South Korea reported that the regime is ready for talks to end a nuclear standoff.

Under U.S. law, when a country or leader violates its ban on chemical and biological weapons, an import ban is imposed on its products, but North Korea is already under severe U.S. and U.N. sanctions, and Tuesday's decision will have little impact.

Kim Jong Un's older half-brother had once been seen as their father Kim Jong Il's natural heir, and some reports had suggested that China might be grooming him to replace the younger man in the event of a crisis.

The ongoing trial in Malaysia heard testimony that Kim Jong Nam expressed fears for his life months before his death.

He spent much of his time in the Chinese gambling hub of Macau and it is not clear why he may have left the relative safety of China's protection to travel to Malaysia if he thought his life was at risk.

The State Department's conclusions on the use of VX nerve agent come as anti-terror police in Britain investigate a potential poisoning of a former Russian spy in the sleepy town of Salisbury.

Sergei Skripal, a former military intelligence colonel who was convicted in Russia of spying for Britain and later released in a spy swap, was found unconscious on a bench in the English town alongside his daughter. Both are in critical condition.

The case immediately drew comparisons to Alexander Litvinenko, an ex-spy who died of radioactive polonium poisoning in London in 2006. A British inquiry ruled in 2016 that Putin "probably approved" the killing.