Violence against Muslims escalates in Sri Lanka despite emergency measures 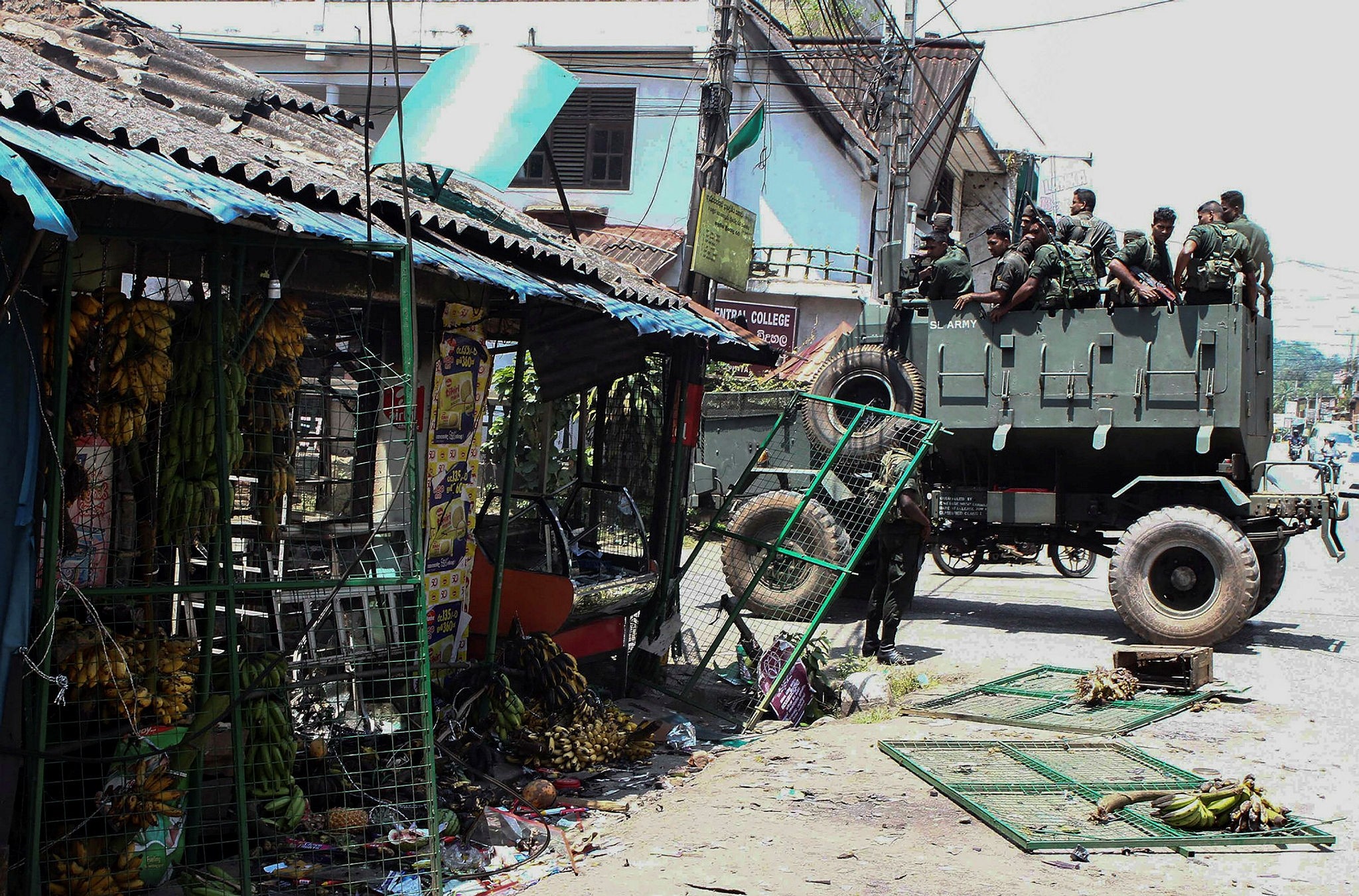 Sri Lankan army patrol the streets of Katugastota, a suburb of Kandy, March 8.
by Compiled from Wire Services Mar 09, 2018 12:00 am

Buddhists swept through Muslim neighborhoods in Sri Lanka's central hills, destroying stores and setting homes on fire despite a curfew, a state of emergency and a heavy deployment of security forces

Muslim-owned businesses were set on fire and vandalized in several parts of Sri Lanka, police said, days after an island-wide state of emergency was imposed to curb riots in Kandy.

Armored vehicles and heavily-armed troops fortified the hill district, where internet services remain suspended and an evening curfew is in place. The government ordered the internet blackout after police discovered mobs of Sinhalese rioters were using social media to coordinate attacks on Muslim establishments.

More than 200 homes, businesses and vehicles have been torched in three days of violence by mobs from the mainly Buddhist Sinhalese majority.

A 24-hour curfew was imposed on Wednesday afternoon after a hand grenade exploded in the hands of an attacker, killing him and wounding 11 others, officials said. The day-time curfew was eased following a calm night but tensions remain high in the tourist hotspot and schools have been shuttered.

"We can't trust the army and police. My shop has been attacked in their presence and I don't know what could happen tonight," said Mohamed Faraz, whose butcher shop was ransacked, as reported by AP.

The government ordered a state of emergency Tuesday and later shut down popular social media networks, saying they were being used to spread false rumors that led to the attacks.

"Technology created to bring people together is being used to pull people apart," technology minister Harin Fernando was quoted as saying by the Sri Lanka Mirror newspaper. "Social media websites such as Facebook, WhatsApp and Viber ... have been used to destroy families, lives and private property." Some see the violence rooted in the spread of hardline Buddhism.

Sri Lanka has long faced a bitter ethnic divide between the majority Sinhalese and the minority Tamils, fueling a decades-long civil war as Tamil militants tried to carve out their own homeland. But in the years since the war ended in 2009, a religious divide has grown, with the rise of Buddhist nationalist groups that stoke anger against the minority Muslims, saying they are stealing from Buddhist temples or desecrating them, or forcing people to convert to Islam. Muslims also own many of Sri Lanka's small shops, and many Muslims suspect small-town jealousy has led to some of the attacks. The Sinhalese are overwhelmingly Buddhists, while Tamils are mostly Hindu, Muslim and Christian.

"It is vital that all political leaders, religious and other community leaders condemn violence," the European Union ambassadors to Sri Lanka said in a statement Thursday, calling for "urgent action against hate crimes."

The United Nations has condemned the violence and urged Colombo "to ensure that appropriate measures are swiftly taken to restore normalcy in affected areas." The violence and heavy security presence are largely limited to the island's central hills; in the capital, Colombo, and other cities and towns, there are few if any signs of trouble.