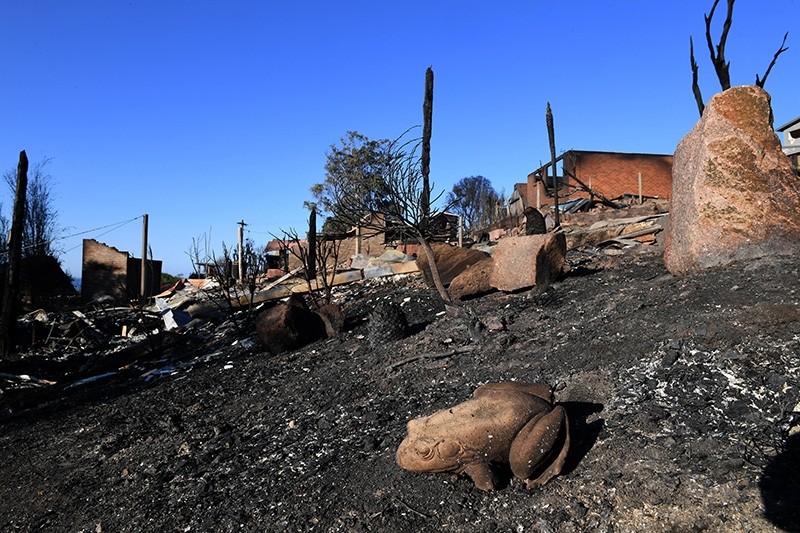 A picturesque seaside town on the south-eastern coast of Australia has been left devastated after a ferocious and fast-moving bushfire ripped through more than 100 homes and businesses.

New South Wales' Rural Fire Service (RFS) said 69 houses have been destroyed and 39 damaged in a blaze in and around the town of Tathra, east of Bega, on the state's south coast.

Initial damage assessment has found 30 caravans and cabins were also destroyed, the RFS said Monday in an email statement.

Nearly 400 houses were saved. The entire township has been officially declared a disaster area.

The fire was still actively burning in the area on Monday evening, despite easing of the weather conditions.

More than 150 firefighters have been fighting to contain it. They are supported by water-bombing aircraft.

The blaze started on Sunday from five different locations around Bega and was fanned by very strong winds, with gusts up to 90 kilometers per hour, as well as high temperatures.

The main fire spread in an elongated fashion "straight toward the ocean," RFS commissioner Shane Fitzsimmons told reporters on Monday.

"But sadly the direction the winds blew this fire put it right into the center of the township."

The fire has already burned more than 1,000 hectares, crossing several kilometers of bushland and a river before reaching the town, which has a population of about 1,600.

Before residents can go back into their homes, authorities need to make the environment safe "as quickly and practically as we can," Fitzsimmons said.

The town's mobile phone tower and power lines collapsed due to the fire, making communication harder. Authorities have also warned about the possibility of asbestos "floating around."

Prime Minister Malcolm Turnbull said he was shocked at the destruction, saying: "Thank heaven there have been no lives lost."

"That's a great tribute to the community, to the firefighters, to all of that preparation and resilience," he told reporters during a visit to the Bega evacuation center.

Hundreds of residents were forced to sleep overnight at an evacuation center in Bega.

"Everybody (is) banding together to help as much as they can, the offers have been overwhelming," Bega Valley Shire Council's general manager Leanne Barnes said.

The fire department downgraded the threat level on Monday.

The weather department has forecast possible showers on Tuesday, which RFS hopes will help firefighters.

"Everyone, please keep your fingers crossed," RFS said on Twitter.