64 dead after fire tears through shopping mall in Siberia 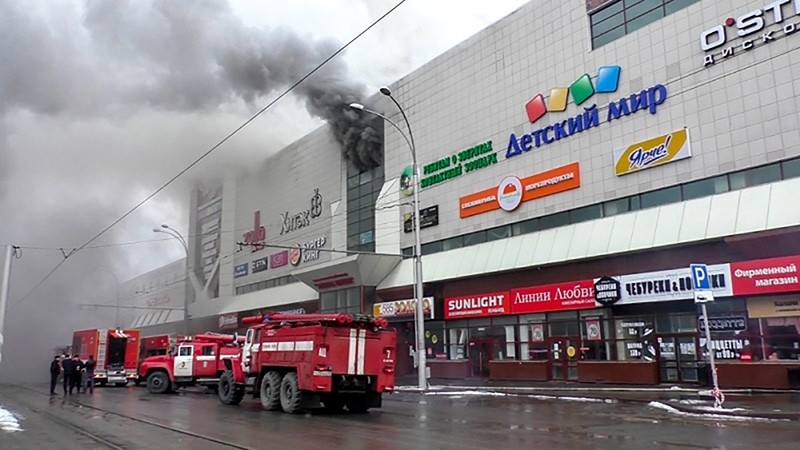 This handout picture released by The Russian Emergency Situations Ministry on March 25, 2018, shows emergency vehicles as they gather outside a burning shopping centre in Kemerovo. (AFP Photo)
by Compiled from Wire Services Mar 25, 2018 12:00 am

With the fire alarms silent and staff reportedly nowhere to be seen, a fire at a shopping mall packed with children and their parents on the first weekend of the school recess killed 64 people in Russia's Siberia.

The fire at the Winter Cherry mall in Kemerovo, a city about 3,000 kilometers (1,900 miles) east of Moscow, was extinguished by Monday morning after burning through the night. Firefighters were still recovering bodies as parts of the buildings were still smoldering. Some of the dead were found inside a cinema, which one witness said had been locked shut.

The fire, one of the deadliest in Russia since the end of the Soviet Union, swept through the upper floors of the mall where a cinema complex and children's play area were located.

Russian emergency services said the fire, which started on Sunday afternoon, had now been extinguished but that rescuers were struggling to reach the upper floors because the roof of the building had collapsed.

A security guard who turned off the fire alarm during a deadly blaze at a Russian shopping mall is being considered a suspect in a criminal case, federal investigators said.

More than a dozen people were still unaccounted for. People posted appeals on social media seeking news of their relatives or friends, and authorities set up a center in a school near the mall to deal with inquiries from people seeking missing family members.

Video footage from inside the mall after the fire broke out showed a group of people in a smoke-filled staircase trying to smash a fire exit door, which was jammed.

On Monday morning, Kemerovo residents were bringing flowers, candles and stuffed animals to a plaza outside the mall, and local hospitals reported an influx of people wanting to donate blood for the victims.

Sixty-four deaths were confirmed after the firefighters finished combing through the four floors of the mall, Emergency Situations Minister Vladimir Puchkov told a televised briefing. Six of the bodies have not yet been recovered. Puchkov would not immediately say how many of the victims were children as only 17 people have been identified.

Twelve people have been hospitalized. Health Minister Veronika Skvortsova, who visited the Keremovo hospital where the victims were receiving treatment, said on Russian state television that the patient in the gravest condition is an 11-year-old boy who jumped out of a window from the fourth floor. The boy's parents and younger sister died in the fire, Skvortsova said.

Some 200 animals are also believed to have died in the mall's petting zoo. The zoo's manager told the Tass news agency that the animals included rabbits, turtles, pigs, goats and rodents.

Russian state investigators said four people had been detained over the fire, including the owners and leasers of outlets inside the shopping mall. The Investigative Committee, which handles major crimes, said it was trying to bring in the mall's principal owner for questioning.

Winter Cherry was one of Kemerovo's most popular entertainment centers for children, with its own indoor skating rink, petting zoo and trampolines. Kemerovo residents said the mall was packed with children and their parents.

"I learned with deep sorrow that many people, including several children, died in a fire in a shopping mall in Russia's city of Kemerovo," Erdoğan said in his message.

Prime Minister Binali Yıldırım also sent a condolence message to his Russian counterpart Dmitry Medvedev over the fatal fire, according to the Turkish Prime Ministry.

In a statement issued by the Prime Ministry, Yıldırım said: "I have learned with great sorrow that many people, including children, lost their lives or got injured in the fire incident at a shopping mall in Kemerovo city of Russia."

He offered condolences to "the friendly Russian people" and the Russian government over the "painful" incident.

Yıldırım also wished patience for the relatives of the ones who lost their lives, according to the statement.

"Saddened by the news that many people lost their lives because of the fire in Russia's Kemerovo city," he tweeted. "I would like to offer condolences to the Russian people and state, as well as the victims' families."