'Jobs for votes': Indian town warns PM Modi over unemployment ahead of 2019 polls 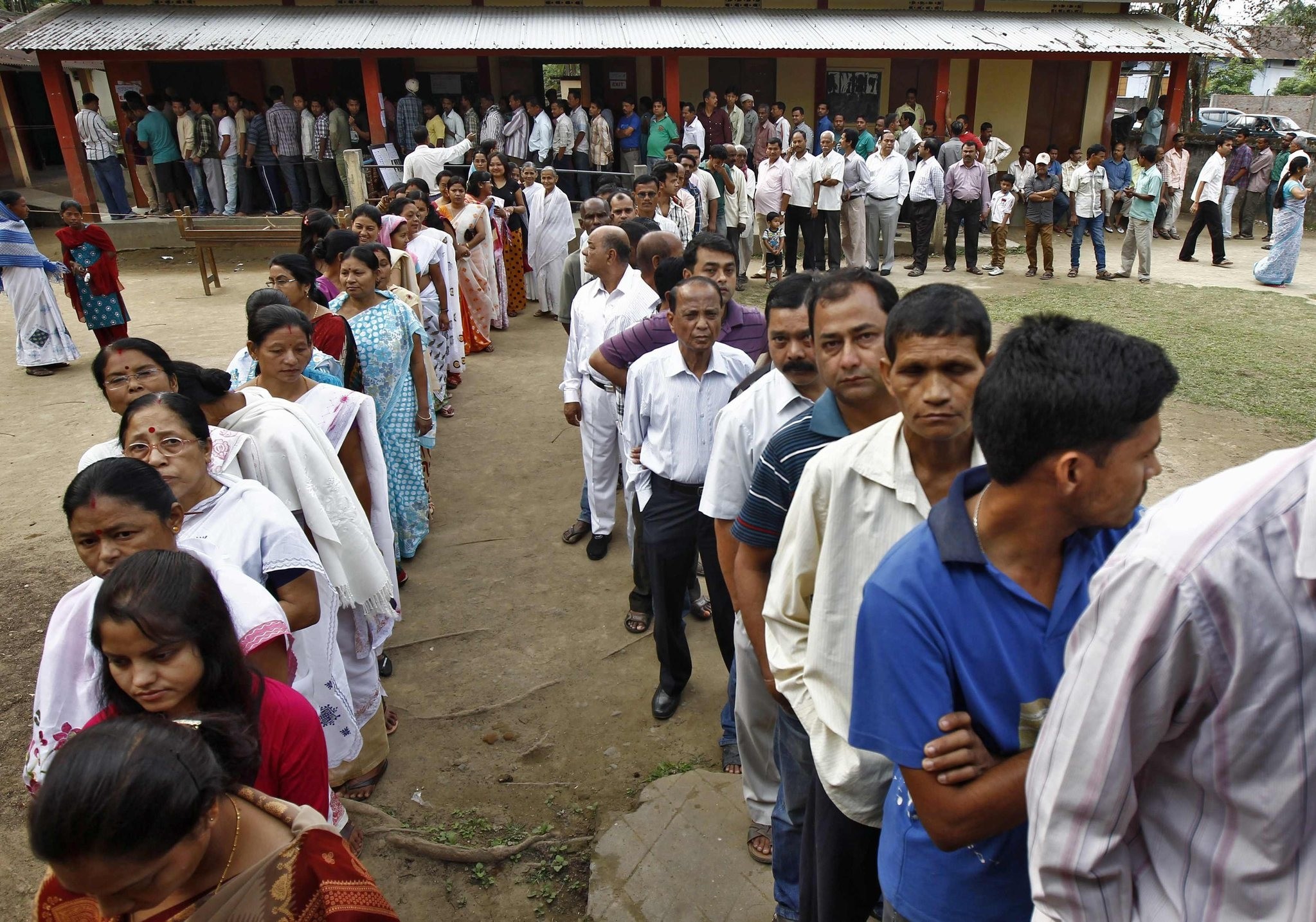 People line up to cast their vote outside a polling station in Nakhrai village in Tinsukia district in the northeastern Indian state of Assam April 7, 2014. (REUTERS Photo)
by reuters
Apr 06, 2018 12:00 am

Rakesh Kumar has a post-graduate degree but works as a house painter in the small town of Kasba Bonli in northwestern India.

The 31-year-old, the only one of eight siblings to attend university, said his attempts to get a salaried job had failed, and he blamed the government of Prime Minister Narendra Modi for not creating employment opportunities as it had promised.

"I voted for Modi last time," said Kumar, wearing a pink shirt and wrinkled, brown trousers that had droplets of paint on it. "He had promised jobs, and I was sure I would get something. I won't vote for him again."

Modi's failure to create tens of millions of jobs for the country's youth - a promise which helped him secure the largest mandate in three decades in 2014 - would be the biggest threat to his bid for another term in a general election due by May, 2019, many political analysts say.

That seems the case in Kasba Bonli, a market town in Rajasthan state on the edge of sprawling wheat fields, which voted overwhelmingly for Modi's Bharatiya Janata Party (BJP) at assembly elections in 2013 and the general election in 2014.

"My two sons are educated but unemployed," said Hanuman Prasad Meena, a farmers' leader in the town. "Many farmers voted in Modi's name earlier, but he has no support here now."

The unemployment rate in India, nearly two-thirds of whose 1.3 billion people are under 35 years old, hit its highest level in 16 months in March at 6.23 percent, according to the Centre for Monitoring Indian Economy (CMIE), an independent think-tank.

The difficulty in getting a reasonable job is so great that more than 25 million people applied for less than 90,000 positions recently advertised by the state-run railways.

Ram Vilas Paswan, a minister in Modi's cabinet, said the jobs data was worrying and that the government was working to address it. He also deflected some of the blame onto provincial authorities.

"People expect only Narendra Modi to give them jobs; they have forgotten that even state governments have some role to play in creating jobs," Paswan said in an interview.

"Still, the central government is worried about it. In elections, even small issues can become a factor. The government is aware of it," he said.

Nevertheless, Modi is still the most popular politician in the country and at the moment it seems unlikely that he will be dislodged. Nearly nine out of 10 Indians held a favourable opinion of Modi and more than two-thirds were satisfied with the direction he was taking the country, according to a Pew survey in November.

The BJP or its partners rule 21 out of 29 Indian states, up from just seven in 2014. The once-mighty Congress party is in opposition in New Delhi and controls only three states.

Before the Modi wave, handouts for farmers by Congress helped turn once-deprived Kasba Bonli into a thriving retail centre, with shops there selling everything from glittery bangles to satellite dishes.

But as some farmers prospered, they wanted their children to move away from agriculture. Modi's election pledge to create around 20 million jobs annually appealed to them, helping send a BJP lawmaker from the area to the Rajasthan assembly for only the second time since 1991.

But Congress could now make a comeback, townspeople said.

Sachin Pilot, a former federal minister and the chief of the Congress party in Rajasthan, said BJP erred by raising expectations "even when they knew certain things were not possible". He added his party won't make "false promises" but would develop the "best possible opportunity to create jobs".

Hanumat Dixit, a local BJP leader in Rajasthan, acknowledged the party could suffer in the coming election because of the lack of jobs, but added Modi needed more time to deliver on his promises.

Modi's government has quoted an independent study to say that around 7 million formal jobs were created in the fiscal year to March 31. That compares with an accumulated shortage of around 80 million jobs, according to CMIE, on top of near one million youth entering the market every month.

"This is a macroeconomic problem, the economy needs to revive," CMIE Chief Executive Mahesh Vyas said. "What the government can do is may be expand fiscally and create conditions for the private sector to invest aggressively so that employment is generated."

The economy, which has also suffered from the bumpy roll-out of a unified tax, recovered in the October-December quarter to grow at 7.2 percent, still below the peak of more than 9 percent clocked between 2005 and 2008.

Vyas said labour participation - the number of people either employed or actively looking for work - fell to 41-42 percent of the labour pool after demonetization from around 47 percent before.

"This is very, very stressful in the sense that people stopped getting jobs and looking for jobs," Vyas said. "They will get anxious, they will get angry. The first thing they will do is they will demand jobs from the political system."

Over the past three years, India has been hit by several protests by caste groups demanding that jobs be reserved for them.

Back in Kasba Bonli, groups of young men loiter around the market during the day or sit on parked motorcycles. Still, there was no unrest or spike in crime, two local police officials said.

Bablu Saini, 21, recently set up a tea-stall outside his father's mobile phone-repair shop. He has not studied beyond high school and stopped looking for jobs after a few attempts.

"I have many friends who have returned from the cities jobless," said Saini, in between serving tea to customers.

"There are no vacancies anywhere. No point waiting for jobs."