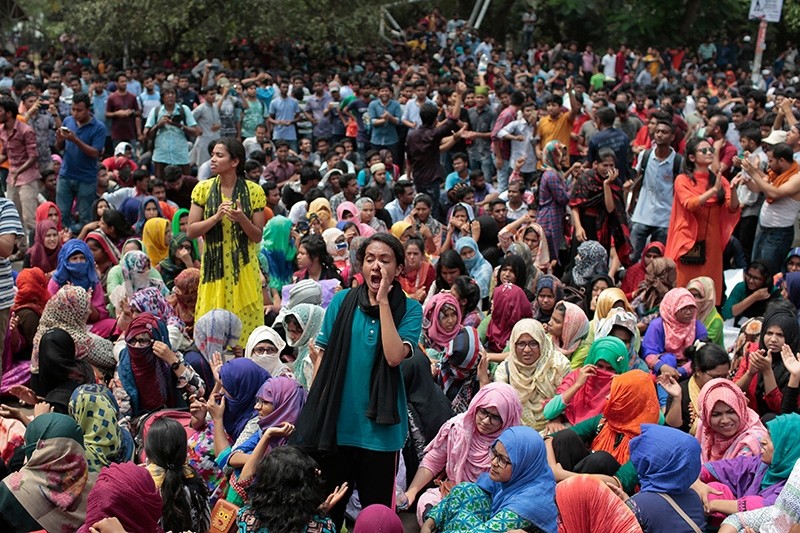 Thousands of students across Bangladesh staged protests and sit-ins Monday after clashes at the country's top university left at least 100 people injured.

Police fired rubber bullets and tear gas at Dhaka University students fighting what they complain are discriminatory quotas for government jobs in favor of special groups.

It was one of the biggest protests faced by Prime Minister Sheikh Hasina in her decade in power.

Following the violence that erupted Sunday and continued into the early hours of Monday, classes at Dhaka University ground to a halt as thousands occupied the main square chanting "Reform, reform!"

At Jahangirnagar University alone, more than 1,000 students joined the demonstrations, said Ataur Rahman, a protester in Savar where the university is located.

Dhaka University students said they would continue their fight.

"We won't leave the streets unless our demands are met. This is all about dignity. We are not afraid of bullets," said Abdullah Bhuiyan, a 22-year-old English student.

Another student, Saimon Rahman, said quotas meant young graduates missed out on government jobs: "We want a merit-based society. We want equal opportunities for all," he said.

Students burned furniture and set lengths of bamboo alight but no fresh clashes were reported after the overnight scuffles turned Dhaka University into a battleground.

Hundreds of police patrolled key entry points to the campus.

Organizers in Dhaka said they had been holding peaceful protests Sunday when police started firing tear gas and rubber bullets, and used batons and water cannon to clear a central square.

As violence spread across the campus, thousands of male and female students engaged in pitched battles with officers.

"More than 100 people were injured," police inspector Bacchu Mia told AFP, adding they were treated in hospital but their condition was not serious.

The students are angry at the government's decision to set aside 56 percent of civil service jobs for the families of veterans from the 1971 war of independence and for disadvantaged minorities.

That leaves most university graduates to fight for only 44 percent of the jobs.

The prime minister has asked senior minister Obaidul Quader to hold a meeting with the protest leaders, he said.

Hasan Al Mamun, a leader of the protests, said tens of thousands of students joined the demonstrations nationwide Monday. Police declined to estimate the number.

Al Mamun said the quota for top-grade jobs should be reduced to only 10 percent.

Students are particularly upset at the 30 percent quota set aside for descendants of veterans of the independence war.

Sheikh Hasina, whose father was the architect of the country's independence from Pakistan, has rejected demands to slash the quotas.