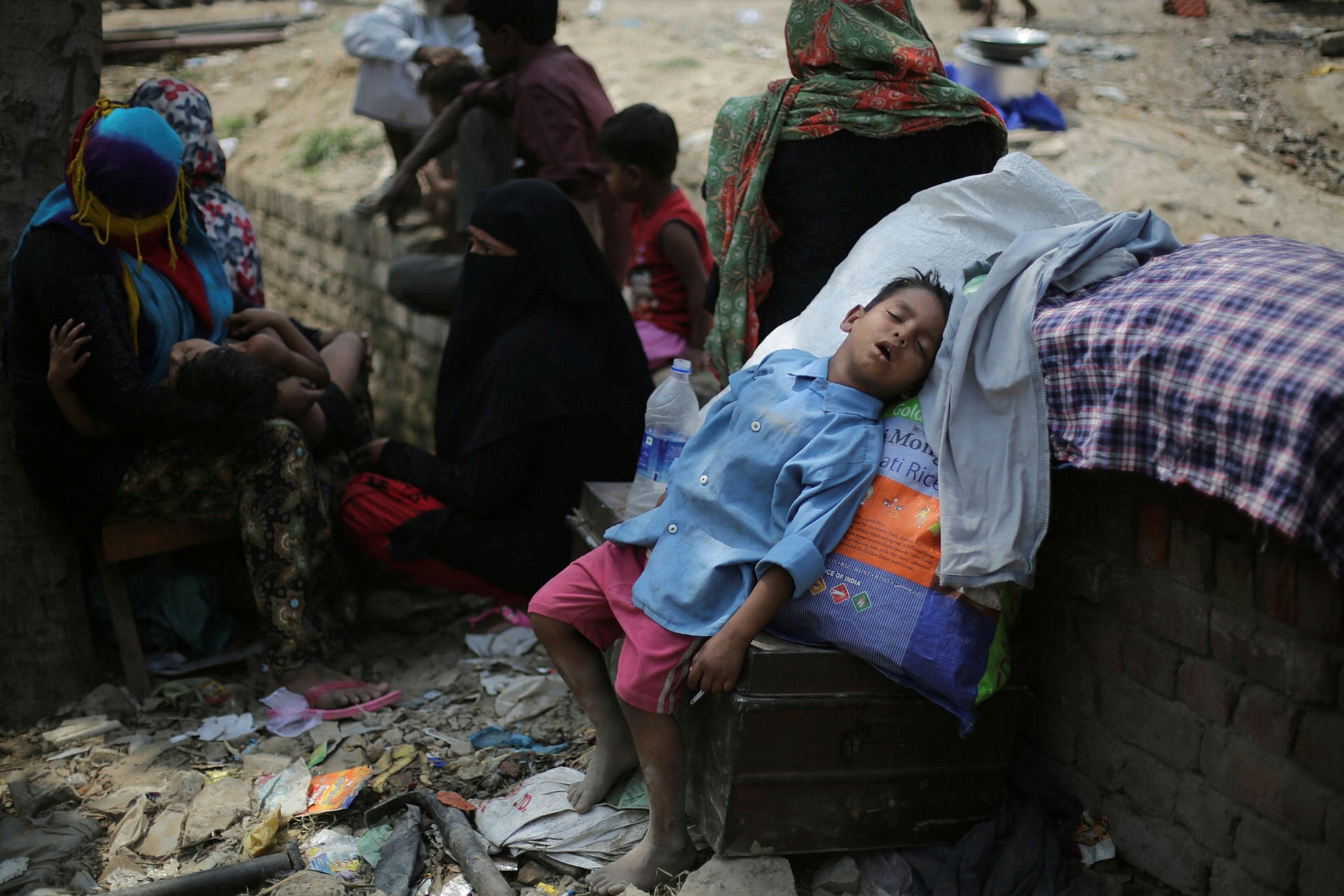 A boy naps under the shade of a tree after an early Sunday fire razed down a Rohingya camp in the Kalindi Kunj area of New Delhi, April 15.
by Yusuf Selman İnanç Apr 16, 2018 12:00 am

In a privately organized press meeting, Bangladeshi Foreign Minister Ali said the repatriation process would begin soon, yet the Myanmar government's claims and arguments were false

In a private press meeting Bangladeshi Foreign Minister Abul Hassan Mahmood Ali said the arguments proposed by the Myanmar government on the Rohingya Muslims were baseless. The claim that Rohingya people belonged to Bangladesh and are part of the Bengali community is false, the minister asserted. Although he said "things seem to be moving now" as certain agreements with the U.N. and the Myanmar government were concluded for the repatriation, his statements indicated Myanmar's unwillingness to help the stabilization process.

Rohingya Muslims are the most persecuted minority in the world according to U.N. figures and continue to suffer from oppression under the Myanmar government, the army and Buddhist extremists. Over the past decade, thousands of Rohingyas have been killed since violence broke out in 2008, causing hundreds of thousands to flee their homeland for Bangladesh, Malaysia and other countries in the region. The Rohingyas live in Myanmar, along its border with Bangladesh. In a paper delivered by the Bangladesh foreign ministry, the Rohingya people are described as mixture of various ethnic groups, who have emigrated to the area over the course of history. "Rohingyas of Arakan are not a race group per se developed from one tribal group or a single racial stock. They are a mixed people from various races and cultures. Initially, peoples of Indian origin, Bengalis, Arabs, Persians, Afghans and Central Asians came mostly as agriculturalists, traders, warriors and preachers, mingled with the local people and settled in Arakan," the paper wrote.

The U.N. has repeatedly warned the international community on the atrocities, committed by the Myanmar army and extremists as well as on the deprival of citizenry rights. The Myanmar government has long been claiming that those people did not belong to Myanmar but were an element of Bangladesh. Calling this argument false and baseless, the minister said, "There are many ethnic groups in the region and the situation is more complicated than people think. Rohingyas have been living in Arakan for 2,000 years. The heritage of British colonialism complicates matters more. There were exoduses throughout history and the people of the region are somehow related. However, it is a baseless claim that Rohingyas are Bengalis. International community, including the U.N. and U.N. Security Council (UNSC) support Bangladesh."

Noting that the Rohingyas were recognized as natural citizens of Myanmar after the British left in 1948, he said, "In 1947, the British made a constitution for Myanmar before leaving the country. According to that constitution there were no indigenous group in Myanmar but came from different parts. Therefore, everybody is a citizen. Rohingya people are also citizens as they have been living for centuries. After the British left, in the first government the Rohingyas were in the parliament. Myanmar's sudden claim that these people have come from Bangladesh is not acceptable." The paper also underlined that Rohingyas were deprived of citizenship in 1982 but 236,599 of them were allowed to return their homeland in 1992 after Myanmar government accepted them as "members of Myanmar society."

The minister, though seeming desperate, said the repatriation process for the 1.1 million refugees would start soon as an agreement was signed with the Myanmar delegation. However, he also mentioned certain problems. For instance he said, "The Myanmar government changed the names of the villages and bulldozed them, including the trees," so that when the Rohingyas were asked to return the Myanmar government would object, saying no village by that name exists.

He also thanked Turkey's efforts during the crisis, reminding that Turkish first lady Emine Erdoğan, her son Bilal Erdoğan and Foreign Minister Mevlüt Çavuşoğlu visited the camps. "We are grateful for Turkey's efforts," he said.