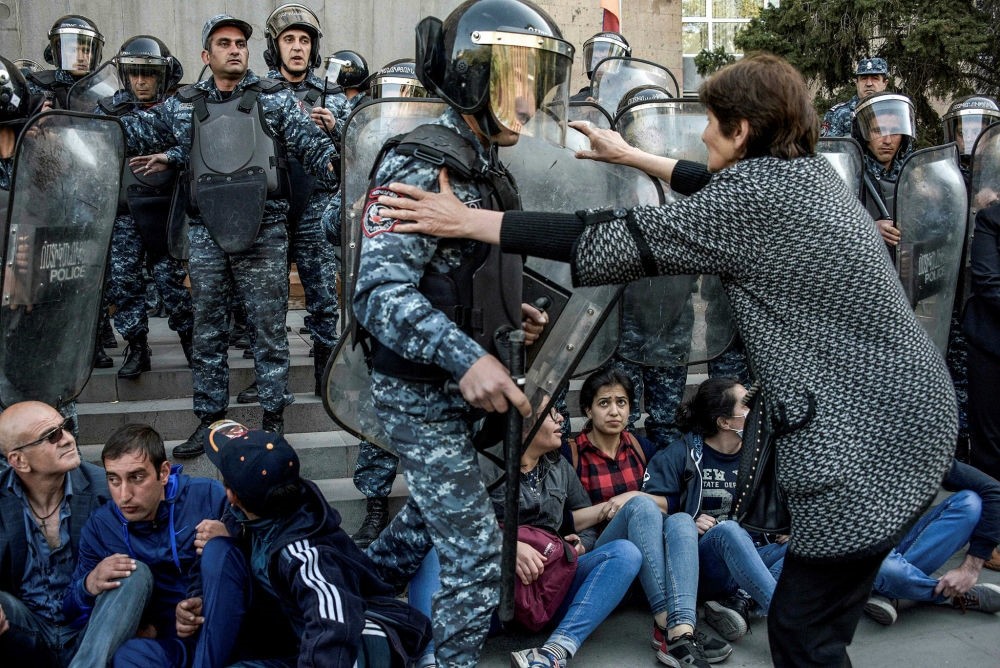 A demonstrator tries to stop riot police officer during an anti-government rally, Yerevan, April 19.
by Compiled from Wire Services Apr 20, 2018 12:00 am

Led by firebrand opposition MP Nikol Pashinian, hundreds of protesters attempted to blockade the entrance to government headquarters in central Yerevan before riot police intervened, arresting dozens of people and taking them to a local police station, an Agence France-Presse (AFP) journalist reported from the scene.

Pashinian called on police to "stop protecting government buildings from protesters, as they belong to the people, not to Sargsyan who has seized power in Armenia."

"Police think detentions will scare us and that we will lose spirit. But we will not stop; we are resolute in our struggle to achieve change in this country," 24-year-old protester Suren Harutyunyan told AFP. Protesters have held rallies over recent days to denounce Sargsyan's efforts to remain in power as prime minister under a new parliamentary system of government.

On Wednesday evening, more than 16,000 rallied in central Yerevan's Republic Square, vowing to mount a nationwide campaign of "civil disobedience" in opposition to the Kremlin-backed Sargsyan who on Tuesday was elected by parliament to the post of prime minister after a decade serving as president.

Pashinian, who earlier announced the "start of a peaceful velvet revolution," told Wednesday's rally that the protest movement's objective was to "change power" in Armenia through a nationwide campaign of "civil disobedience" and permanent sit-in protests inside government buildings.

The number of demonstrators dwindled on Wednesday, compared with Tuesday's rally of some 40,000, the largest Armenia has seen in years.

The ruling Republican Party nominated Sargsyan, who served as president for a decade from 2008, as its candidate for prime minister on Saturday.

Sargsyan's ally Armen Sarkissian, a former prime minister and ambassador to Britain, was sworn in as president last week after being elected by parliament in a vote that was meant to herald the start of a power shift to the premier and parliament.

The Dashnaktsutyun Party, the Republicans' coalition ally, also backs Sargsyan's candidacy, meaning he should easily secure the simple majority needed for election. No other candidates are running. Sargsyan had denied any intention of becoming premier until March when he said his appointment would allow him to share the benefit of his experience as president.

Armenia, a country of 3 million people in the Southern Caucasus, seceded in 1991 from the then Soviet Union but still relies on Russia for aid and investment. Many Armenians accuse the government of corruption and mismanaging the economy.