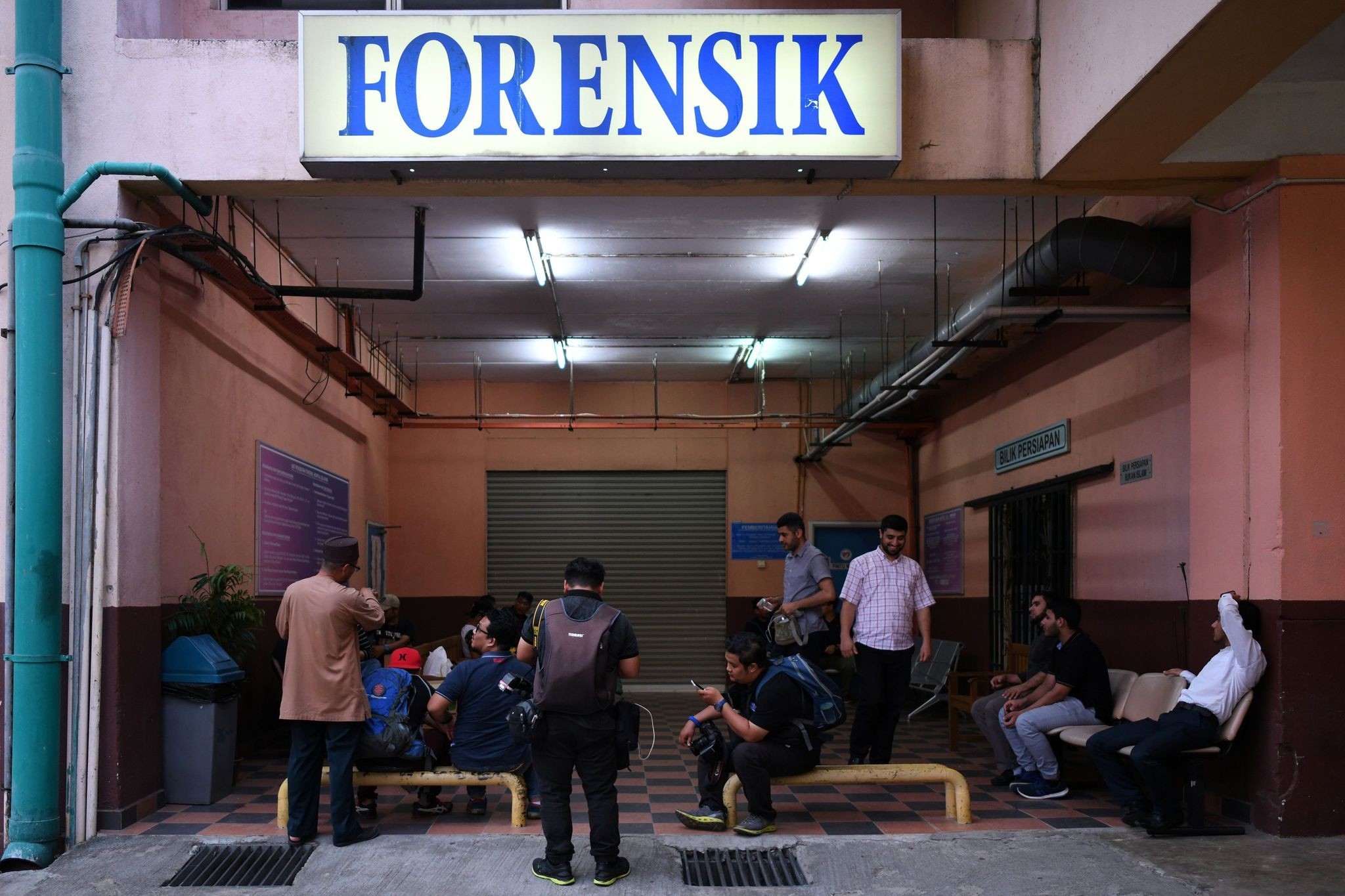 Members of the media wait outside the compound of the forensic wing of the Hospital Selayang, where the body of Palestinian professor Fadi Mohammad al-Batsh is being kept, in Kuala Lumpur on April 22, 2018. (AFP Photo)
by Compiled from Wire Services Apr 22, 2018 12:00 am

An autopsy was being carried out Sunday on the body of a Palestinian professor who was gunned down in what his family claim was an assassination by Israel's Mossad spy agency.

Fadi Mohammad al-Batsh, 35, was killed in a drive-by shooting on Saturday, according to Malaysian authorities.

He was walking from his highrise apartment to dawn prayers at a local mosque in the Kuala Lumpur suburb of Gombak when he was shot by two gunmen riding a motorcycle, officials added.

At the crime scene, police markers indicated 14 bullets had been sprayed at the victim, some of them hitting a wall. An iron grille hit by a bullet was dented.

Malaysian Home Minister Ahmad Zahid Hamidi was quoted by the state-run Bernama news agency as saying Batsh was "an electrical engineer and an expert at making rockets".

In a statement from the Hamas-ruled Gaza Strip, the victim's family said: "We accuse the Mossad of being behind the assassination."

Hamas said Batsh, described as a research scientist specialising in energy issues, was one of its members.

Malaysia's police chief Mohamad Fuzi Harun said a task force has been formed to investigate the killing but would not speculate on the motive or whether foreign assassins were involved.

Photos of the two suspects provided by witnesses showed they looked like Europeans but police could not confirm they were in fact from Europe, he told a news conference Sunday afternoon.

When asked if there was evidence of foreign involvement in the killing, he said: "It is still premature to conclude.

"We want to ensure a complete probe. We are still investigating the motive. I urge people not to make any conclusion."

No arrests have been made so far and the murder weapon has not been recovered, he said as he appealed for witnesses to come forward.

Palestinian representative to Malaysia Anwar al-Asha said Fadi's body will be taken back to the Palestinian territories for burial after it is handed back to the family.

"We are now talking to the handling company to make the arrangements," he told AFP.

Mohammad Shedad, 17, a student and a relative of the victim, also blamed Mossad for the killing.

"It is definitely the work of Mossad. Fadi is a very clever person, anyone who is clever is a threat to Israel," he told AFP outside the victim's Malaysian apartment.

"Fadi is a Hamas member and knows how to make rockets. So (Israel) think he is dangerous."

Batsh leaves a wife and three young children. He had lived in Malaysia for the past 10 years.

Ahmad Abu Bakar, 33, a foreign student studying in Malaysia, said he had known the victim for two years.

"He is friendly and he preaches good things. He never preached any hatred. I am shocked by the killing," he said.

"I suggest Haniyeh to talk less and be more careful," Katz said in an interview with Israeli newspaper Yedioth Ahronoth.

"Gaza is much closer than Malaysia," he said, pointing out that Israel would resume its targeted killing policy against Palestinian resistance leaders, including Haniyeh himself.

"Israel knows how to locate and hurt those Hamas officials who are directing" attacks against Israelis abroad, Katz said.

"Haniyeh and his friends should be careful before they talk ... because Israel's ability to hurt them will be absolute, hard and swift," he said.

Israel is widely believed to have killed numerous Palestinian resistance activists in the past, many of them overseas.

In 1997, Mossad agents tried -- and failed -- to kill Hamas political chief Khaled Meshaal in Jordan by spraying poison into his ear.

Mossad is also believed to have been behind the assassination in 2010 of top Hamas commander Mahmud al-Mabhuh in a Dubai hotel.

Israel has never confirmed or denied its involvement in Mabhuh's murder.