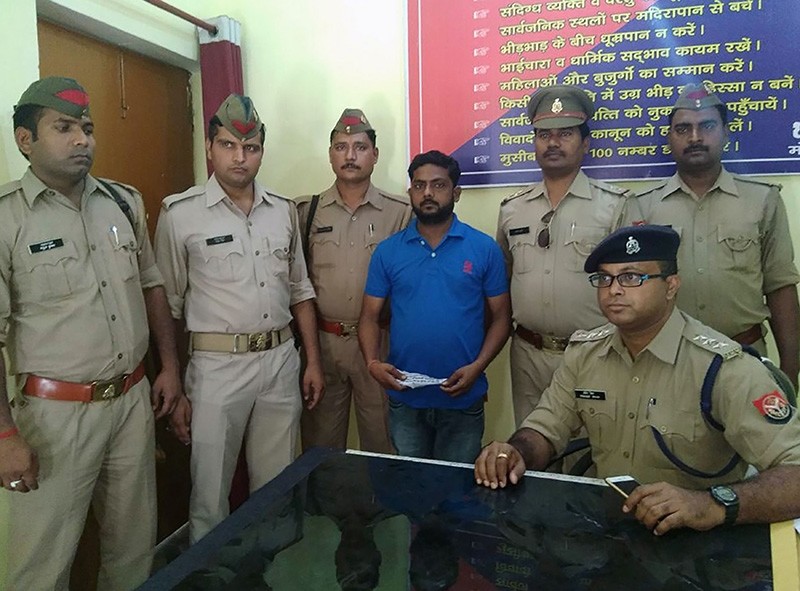 Ram Chandra (C), who has been accused of murder, looks on surrounded by policemen at a police station in Lakhimpur Kheri district in India's northern Uttar Pradesh state on May 1, 2018 (AFP Photo)
by May 01, 2018 12:00 am

Indian police on Tuesday arrested a man accused of killing a bridegroom when he marked his friend's wedding with gunfire, the latest in a grim series of marriage celebrations gone wrong.

A video of Sunil Verma, 25, being hit in the chest late Sunday as he performed Hindu wedding rituals has gone viral on Indian social media.

The footage shows a man identified as a friend of Verma adjusting a pistol when it goes off. The next moment, the groom is seen clutching his chest and slumping face down.

"He has confessed to the shooting but the investigations will continue. We have recovered the murder weapon," Ghanshyam Chaurasia, investigating officer in the Lakhimpur Kheri district of Uttar Pradesh state, told AFP.

The shooter, who could face a murder charge, was on the run until his arrest on Tuesday in a neighboring town.

Police said two shots were fired from the licensed pistol belonging to the friend.

Although outlawed in India, celebratory gunfire at weddings and other social events is common and sometimes deadly.

A 20-year-old man was killed at his cousin's wedding on Sunday after revelers fired live ammunition to celebrate the event in neighboring Allahabad district.

The shooter, a relative of the groom, is also on the run, police said.

And in February, during celebratory gunfire at a wedding in the capital New Delhi, the groom was hit by a stray bullet and killed.