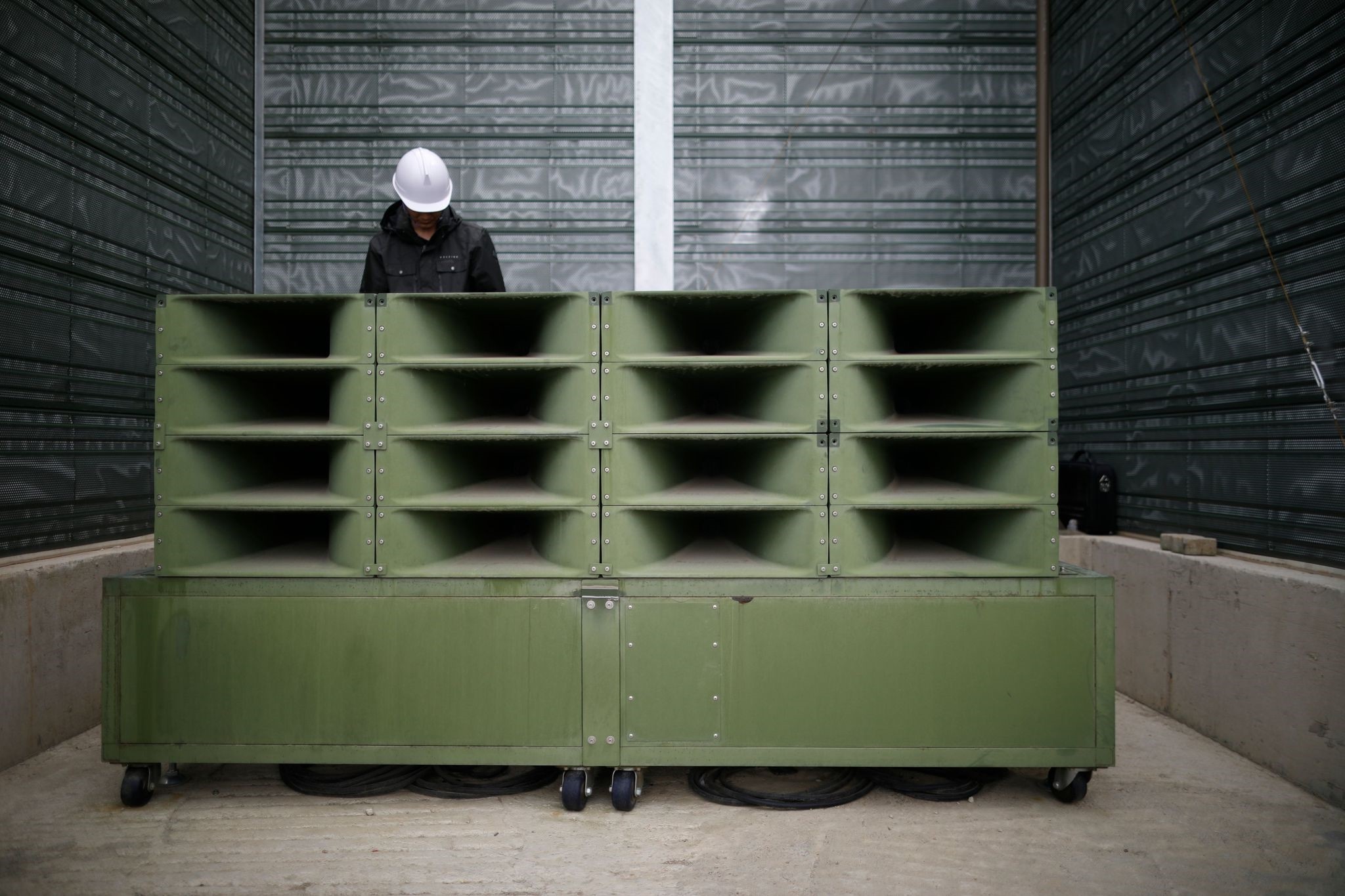 A worker dismantles loudspeakers that were set up for propaganda broadcasts near the demilitarized zone separating the two Koreas in Paju on May 1, 2018. (AFP Photo)
by Associated Press May 01, 2018 12:00 am

South Korea and North Korea on Tuesday started dismantling huge loudspeakers used to blare propaganda broadcasts against their neighbors from their border with each other, as the South's president asked the United Nations to observe the North's planned closing of its nuclear testing site.

The dismantling of dozens of South Korean loudspeakers that broadcasts anti-Pyongyang propaganda and K-pop songs was in line with reconciliation steps the leaders of the rival Koreas set at their historic summit last Friday. It was still unclear if such measures could bring permanent peace because no major breakthrough in the North Korean nuclear standoff was produced after the Korean summit.

South Korean soldiers disassembled loudspeakers at multiple front-line areas before pulling them away from the border, according to Seoul's Defense Ministry. A ministry official, speaking anonymously citing department rules, gave no further details such as how long the dismantling work would continue.

Both Koreas before the summit had halted propaganda broadcasts along the 248-kilometer (154-mile) -long border.

Cold War-era propaganda warfare had resurfaced in 2016 when tensions rose sharply after the North's fourth nuclear test. Seoul broadcast criticism of the North's abysmal human rights conditions, world news and weather forecasts as well as pop songs. The North broadcast anti-South messages and praises of its own political system.

North Korean leader Kim Jong Un has suspended nuclear and missile tests and placed his nuclear program up for negotiation, but skepticism lingers about how serious he is and what disarmament steps he would eventually take. Some experts say Kim's sincerity would be tested during his planned meeting with President Donald Trump in what would be the first-ever North Korea-U.S. summit talks since the end of their fighting in the 1950-53 Korean War.

Trump said Monday he likes the idea of going to the southern side of Panmunjom, the place for the Korean summit, to meet Kim, though he said Singapore was also under consideration. He said Saturday that his meeting with Kim could happen in the next three to four weeks.

During Friday's summit, Kim told South Korean President Moon that he would shut down his country's only known nuclear testing site in May and allow outside experts and journalists to watch the process. Kim also said he would be willing to give up his nuclear programs if the United States commits to a formal end to the Korean War and a pledge not to attack the North, according to South Korea's presidential office.

Some experts downplayed the significance of the closing of the Punggy-ri test site, where six underground explosions have been conducted and which the doubters believe may be too unstable for another. Kim denied such views, saying the site has two underground tunnels to be used for new tests.

During a telephone call with U.N. Secretary-General Antonio Guterres on Tuesday, Moon said he wants the U.N. to observe the work to close down the Punggy-ri site. Moon also asked for the U.N. to formally declare its support for his recent summit declaration with Kim, and Guterres responded he'll try to contribute for an establishment of peace on the Korean Peninsula, according to Moon's office.

According to their summit accord, Kim and Moon agreed to achieve "a nuclear-free Korean Peninsula through complete denuclearization," rather than clearly stating "a nuclear-free North Korea." North Korea has long said the term "denuclearization of the Korean Peninsula" must include the United States pulling its 28,500 troops out of South Korea and removing its so-called "nuclear umbrella" security commitment to South Korea and Japan.

Kim could offer more disarmament concessions during his meeting with Trump, and some analysts say Kim may announce scraping North Korea's long-range missile program, which has posed a direct threat to the United States.