Macron visits New Caledonia ahead of vote on independence from France 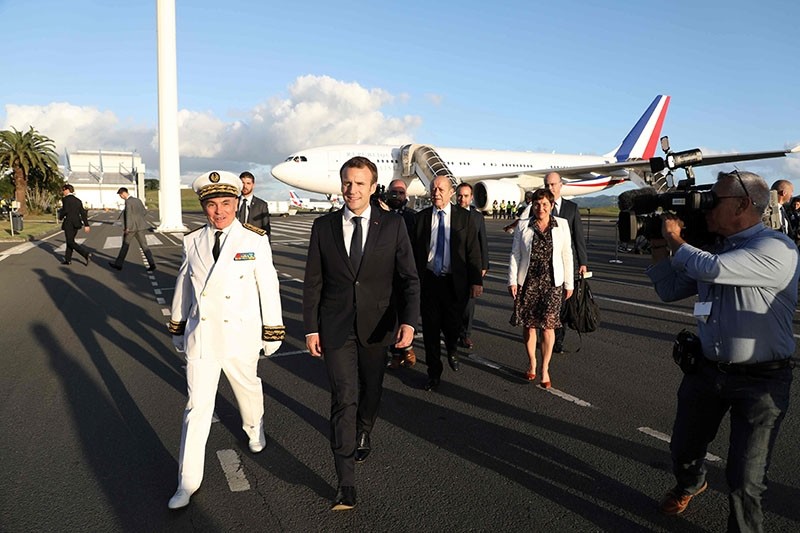 French President Emmanuel Macron (C) walks with officials including Foreign Affairs Minister Jean-Yves Le Drian (C/R) and Overseas Minister Annick Girardin (R) as he disembarks from his aircraft on arrival in Noumea on May 3, 2018. (AFP Photo)
by May 03, 2018 12:00 am

President Emmanuel Macron made his first visit to the French archipelago of New Caledonia Thursday, where tensions are running high ahead of an independence vote long sought by ethnic separatist groups.

Macron said on his arrival he was happy to visit during "an important year" for the South Pacific islands, known for their pristine beaches as well as extensive nickel reserves.

The territory, 1,200 kilometers (750 miles) east of Australia and 20,000 kilometers from France, is a strategic foothold for Paris in the Asia Pacific region, with Macron saying in Sydney this week that the archipelago was "a geopolitical opportunity" while also noting its economic potential.

But economic inequality has persisted despite decades of efforts to improve living standards for the indigenous Kanak ethnic group who make up around 40 percent of New Caledonia's roughly 270,000 residents.

The majority of them support a full break with France.

Macron's visit also coincides with the 30th anniversary of a bloody attack and hostage taking by Kanak separatists against police officers at Wadrilla, on the island of Ouvea, where six officers and 19 militants were killed.

The president is expected to attend a memorial ceremony for the officers, while also observing a moment on silence at the site where two nationalist leaders were murdered by one of their own at Wadrilla in May 1989.

"This will above all be a chance... to consecrate the important moments in our shared history, moments that have at times been painful, such as those which we will commemorate," Macron said as he arrived.

But while he plans to make the symbolic gesture of presenting the Caledonian government with the original charter from 1853 claiming the islands as a French territory, Macron said he would not take a position on the independence vote set for November.

"It's not up to us to influence this choice," he said this week in Sydney, which he visited before leaving for the islands, adding that he was hoping to avoid any "unnecessary tensions."

"I respect this vote... It's an example, and the world is watching us," Macron said.

During his presidential campaign, however, Macron had expressed his wish for "the Rock", as the territory is known, to remain part of France.

A survey published Wednesday by the local polling group I-Scope showed that unionists were expected to handily win the referendum.

France has been grappling with unrest in other overseas territories which dot the globe, which are the legacy of the country's colonial history.

Recent strikes on the French Indian Ocean island of Mayotte underscored simmering resentment over perceived neglect by the state.

Macron is also planning a major speech for Saturday to mark the 20th anniversary of the so-called Noumea Accord for New Caledonia, which ended years of violence and pledged a gradual increase in autonomy, culminating in the independence vote set for November 4. Talks on the island's future began in 1988 and a 1998 deal provided for a referendum on independence to be held by the end of 2018.

But he will be walking a fine line during his visit, with some Kanak lawmakers urging the president to recognize colonial violence on the islands as a crime against humanity.

Many unionists, however, have accused Macron of giving too much weight to the Kanak community during his visit, and have scheduled a pro-republic "red, white and blue march" in the capital of Noumea for Friday.

The territory, which holds a unique position among French outposts allowing it to set its own tax, labor and trade policies, relies heavily on exports of nickel, used to make stainless steel, rechargeable batteries and coins.

"There are elements, those who favor independence, that have threatened to boycott the vote," said Denise Fisher, a former Australian consul-general in the territory.

"The last vote that happened in 1987 in the thick of the civil war was a disaster because the Kanaks all boycotted it, it wasn't seen a genuine referendum."

Macron is not expected to provide any voting recommendations, though Jonathan Pryke, director of the Lowy Institute's Pacific Islands Program, said his arrival would provide a boost to the remain campaign.

New Caledonia, one of five island territories spanning the Indo-Pacific held by France, is the centerpiece of Macron's plan to increase its influence in the Pacific.

Australia and New Zealand have separately warned that China is seeking to exert influence through its international aid program in the Pacific. China denies that.

While not naming China, Macron said in Australia on Wednesday France's expansion in the Pacific was to ensure a "rules-based development".

"It's to preserve necessary balances in the region. And it's important with this - precisely this new context not to have any hegemony in the region," Macron told reporters in Sydney.