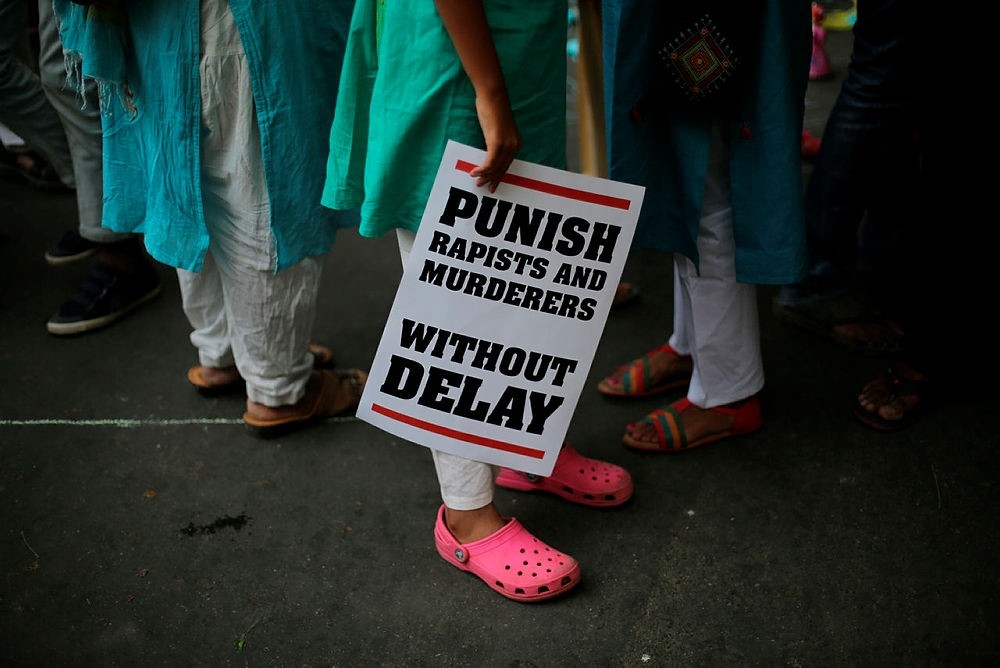 In this April 15, 2018 file photo, an Indian protestor stands with a placard during a protest against two recently reported rape cases as they gather near the Indian parliament in New Delhi, India. (AP Photo)
by Compiled from Wire Services May 05, 2018 12:00 am

Reports of sexual assault of children have dominated headlines in recent weeks, leading to an outpouring of anger across the country.

Police arrested 14 men and a woman in one of the latest cases after a 16-year-old girl, who had been raped, was attacked and burned to death after her parents complained to a village council.

The girl's family said four men, allegedly drunk, kidnaped her from a wedding she was attending in a nearby village on Thursday night. They then took her to a deserted spot and sexually assaulted her.

The girl's father later complained to the members of the village council, but the accused men were let off after a punishment of 100 sit-ups and a fine of 50,000 rupees (750 dollars), Singh said.

"The family says that the men, angered over the complaint, barged into their home, beat them and set the girl on fire after pouring kerosene on her," he said.

Medical tests to confirm the sexual assault were being conducted.

The attack took place in the Chatra district of the eastern state of Jharkhand.

In addition to the two people who allegedly kidnapped and raped the girl on Thursday, police have also opened a case against 18 others. They include alleged members of the group that set fire to the house and members of the village council accused of failing to report the initial rape allegations to police.

"Fifteen people have been arrested and a hunt is on to nab the remaining," Jharkhand's Inspector General of police Ashish Batra told Reuters. The two alleged rapists are among those being held.

In a separate incident in the state, a 17-year old girl is battling for her life after being raped and set on fire by her assailant.

The victim, who was raped on Friday, is being treated in the neighboring West Bengal state, said Akhilesh Kumar Jha, Deputy Inspector General of police, adding a suspect had been arrested.

In neighboring Odisha state, police have also arrested six people including a juvenile for an alleged gang rape of a 14-year-old girl on Friday in the district of Sambalpur.

"The girl was first assaulted by one person and later by four others in different locations," Police Inspector Jay Rashmi Sethi told Reuters. The sixth suspect is accused of restraining the victim while the others attacked her.

Reports of sexual violence have been steadily rising in India despite the national outrage that followed the fatal gang-rape of a student on a bus in New Delhi in 2012.

The incidents come less than a month after India approved the death penalty for the rape of girls younger than 12, and increased the prison term for the rape of older girls and women after a particularly gruesome rape and murder of a Muslim girl in Jammu and Kashmir state.

Reported rape cases in India have climbed steadily in recent years to around 40,000 in 2016. Many more cases are believed to go unreported. Child rape accounts for about 40 percent of the reported cases.