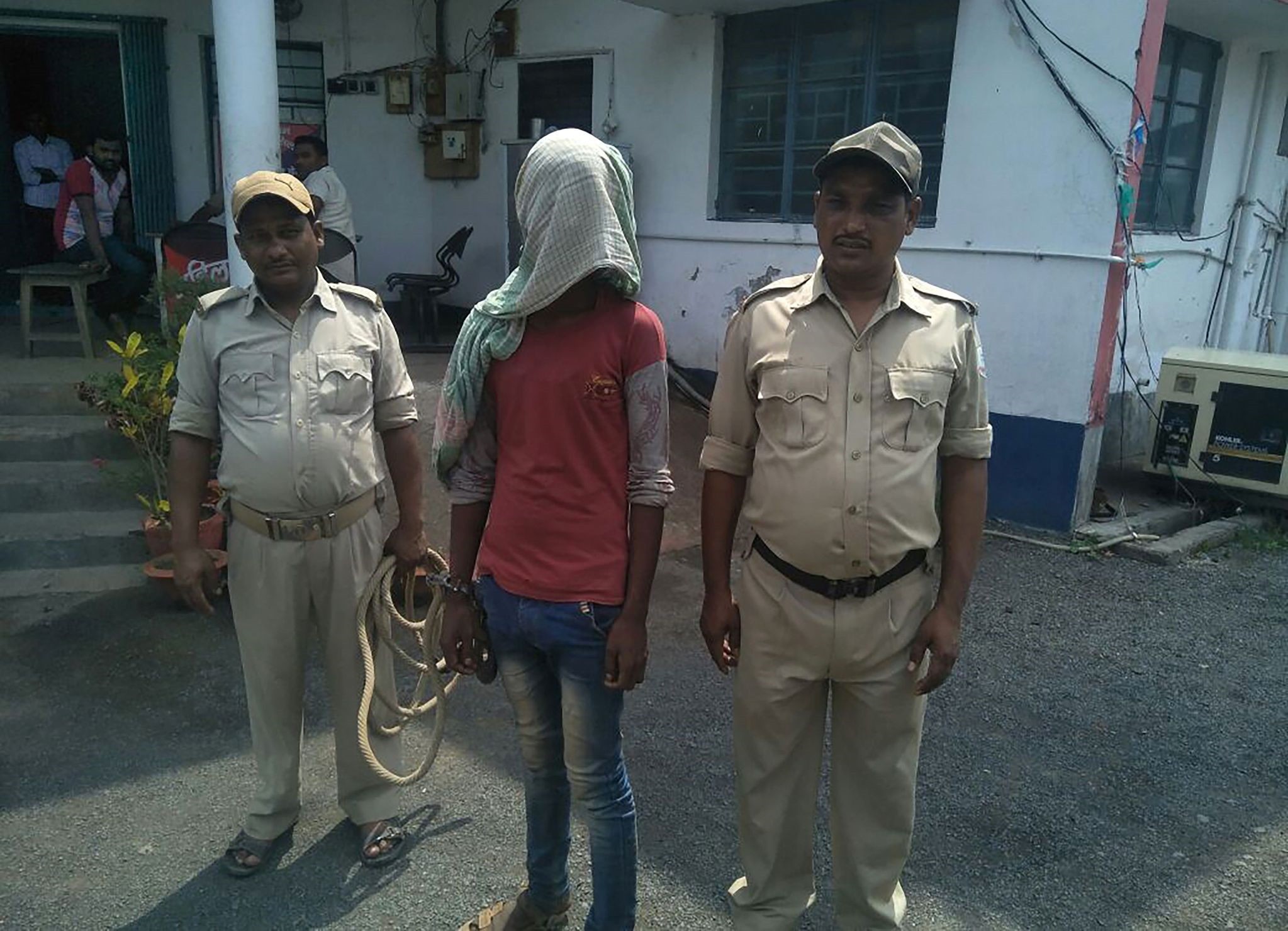 The photo taken on May 6, 2018 shows an alleged rapist (C) being held by Indian police, in the case of a 17-year-old girl who was raped and set on fire, at Mufasil police station in Pakur district, in India's eastern Jharkhand state. (AFP Photo)
by May 07, 2018 12:00 am

A 17-year-old Indian girl was fighting for her life Monday after being raped, doused in kerosene and set alight, the second such case to shake the country this week as it reels from a series of brutal sexual assaults.

The teenager was attacked on Friday -- the same day a 16-year-old was raped and burned to death, also in the eastern state of Jharkhand.

The two incidents have shone a spotlight on the treatment of rape in India, where authorities are facing renewed pressure to act on sexual crimes after the recent gang rape and murder of an eight-year-old girl.

The cases are some of the most high-profile since the 2012 rape and murder of a student on a New Delhi bus that triggered mass protests.

"The girl has suffered 70 percent first-degree burns. There is a chance that she will survive," Shailendra Barnwal, police superintendent of Pakur district, told AFP.

The victim has been moved to a private hospital with specialist facilities for "proper treatment and recovery", he said.

Police have arrested a 19-year-old man who lives in the same neighbourhood as the victim.

"He poured kerosene on the girl and set her on fire," Barnwal said.

Fifteen people have been detained in the case of the 16-year-old, who was torched to death in the state's Chatra district.

The main suspect in that case is said to have been angered by a village council punishment of 100 sit-ups and a $750 fine for raping the girl. He attacked her parents before setting their house on fire with the teenager inside.

Some 40,000 rape cases were reported in India in 2016, but campaigners though say the real number is higher, with victims wary of making complaints because of social stigma.

The country is already agonising over the brutal attack on an eight-year-old in Jammu and Kashmir state, where eight Hindus have been accused over the Muslim girl's abduction, repeated rape and killing.

Hindu activists have staged angry protests claiming that the police inquiry was biased.

The Supreme Court on Monday ruled the flashpoint trial should be moved away from Jammu, a Hindu-majority region of the Muslim-dominated state, to Pathankot in neighbouring Punjab state.

The victim's family made the request for the move, saying they feared for their lives.

Concern over women's safety has been heightened further by new police figures indicating that more than five women were raped every day in the Indian capital this year.

Amid mounting outrage, the government has changed the law to allow execution for child rapists -- but daily sexual assaults continue to be reported.

"I am scared as he is threatening my family. I am being made to face this only because I am a Dalit," the woman, who covered her face to remain anonymous, said at a televised news conference in Lucknow, capital of Uttar Pradesh state.

She chopped her hair off at the press conference to protest the lack of official action and threatened to kill herself if nothing was done against the accused.

A BJP leader from the state facing allegations of abduction and rape was arrested last month.