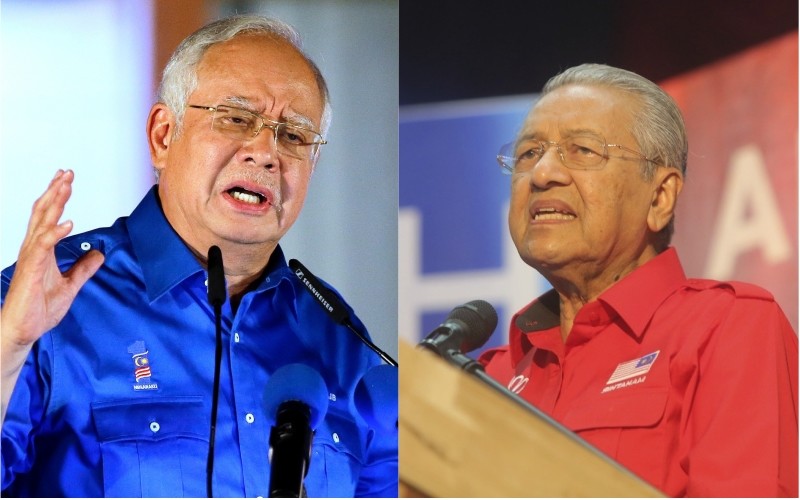 Najib Razak, left, and Mahathir Mohamad deliver their speeches during their last campaign rallies ahead of general election in Malaysia, May 8, 2018. (AP Photos)
by Compiled from Wire Services May 08, 2018 12:00 am

Tens of thousands of Malaysians gathered at an open field outside the city of Petaling Jaya on the border between Kuala Lumpur and the state of Selangor late Tuesday to hear the final campaign speech of opposition leader Mahathir Mohamad.

The 92-year-old Mahathir spoke ten hours before polls were set to open Wednesday for an election that pits him against his former protege, embattled Prime Minister Najib Razak.

The Pakatan Harapan (PH) opposition party's coalition flags were seen waving across the field as the sound of plastic trumpets blared from the crowd, who were seated on chairs and the ground to cheer him on.

"This is the final time I can contribute a little towards the victory of my beloved country," he said in a televised broadcast.

Mahathir told supporters he was not pursuing wealth with his candidacy, saying that he was satisfied with what he already had. He then encouraged members of the crowd to vote for a change in government.

Najib gave his last campaign speech at the same time as Mahathir.

During the rally broadcasted live on television Najib offered voters three policy promises if they return him to power, including the exemption of young people from income tax.

"No matter how much they earn, they will not have to pay taxes at all," he said. "Malaysia is a successful country... I want all Malaysians to wake up to a happy Malaysia."

He also promised to add two public holidays at the beginning of Ramadan, which starts next week, and said toll roads would be free for a period of five days starting two days before the Muslim Eid festival, which marks the end of the holy month.

According to a statement from Malaysia's electoral commission on Tuesday, more than 14.4 million registered Malaysians are eligible to cast their votes on Wednesday.