Tourist dies in stone-throwing demonstrations in Kashmir amid tensions 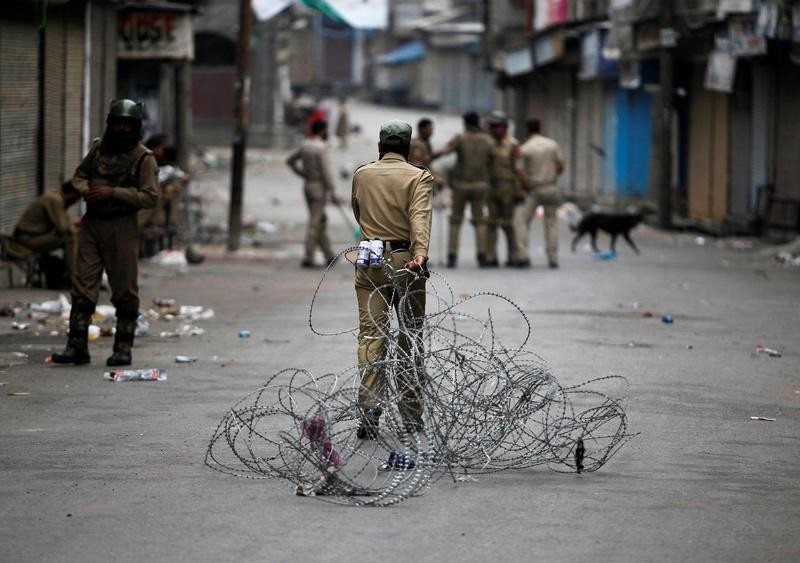 An Indian tourist was killed during a stone-throwing protest in Kashmir, officials said Tuesday, as the disputed region shut down for a third day over the killings of civilians and rebels during weekend gunbattles and anti-India protests.

Meanwhile, a teenage boy who had been shot by Indian troops on Sunday died in a hospital, triggering protests and clashes in his southern Kashmir village.

The tourist, from India's Tamil Nadu state, was critically injured overnight when a stone thrown toward his taxi broke the window and hit his head as he and his parents were on their way back from a resort near western Narbal village, local police official Nazir Ahmed said.

Ahmed said intermittent clashes between protesters and government forces continued all day in Narbal during the shutdown to protest the weekend killings.

The 22-year-old tourist was transferred to a hospital in the region's main city of Srinagar, where he died overnight, police said.

Top separatist leader Mirwaiz Umar Farooq said in a tweet that he was deeply saddened.

During the past few years, authorities have vigorously campaigned to attract Indian and international visitors to the region as a symbol of normalcy after a decades-long anti-India insurgency. However, repeated gunfights, anti-India protests, travel warnings by Western governments and extensive media coverage of the violence have adversely impacted tourism.

In an effort to persuade people to visit Kashmir, the local government in March organized a tourism convention in Srinagar in which hundreds of Indian travel agents participated and declared 2018 as "Visit Kashmir Year."

Mufti, the chief minister, speaking at the convention, said tourism in the region is an "investment in peace."

"Like an army soldier fights at the border, fights against militancy in Jammu-Kashmir, that's one way of fighting. The other way of fighting is that you (tourists) visit us," she said.

Shops, schools and businesses were shut again Tuesday to protest the killings of eight rebels and six civilians during anti-India protests and fighting with government forces over the weekend.

Also Tuesday, a teenage boy injured Sunday in shooting by government forces in the southern Shopian area died in a hospital in Srinagar. Five people were killed and dozens more, including the boy, were injured when Indian troops fired at anti-India protesters in Shopian who had been trying to reach the site of gunbattle in which soldiers killed five rebels.

As news of his death spread in his village, clashes erupted after villagers took to the streets and attacked a local military camp with stones, police and residents said. At least four people were injured after troops fired shotgun pellets and tear gas, they said.

Police and paramilitary soldiers patrolled the region and enforced a security lockdown in old parts of Srinagar, the urban heart of the anti-India protests.

India and Pakistan each administer part of Kashmir, but both claim it in its entirety. Rebels have been fighting Indian rule since 1989, demanding Indian-controlled Kashmir be made part of Pakistan or become an independent country. In recent years, there have been renewed rebel attacks and public protests against Indian rule as a new generation of Kashmiri rebels, especially in the southern parts of the region, has revived the militancy and challenged New Delhi's rule with guns and effective use of social media.

India accuses Pakistan of arming and training the rebels, a charge Pakistan denies.

Most Kashmiris support the rebel cause while also participating in civilian street protests against Indian control.

Nearly 70,000 people have been killed in the uprising and the ensuing Indian military crackdown.