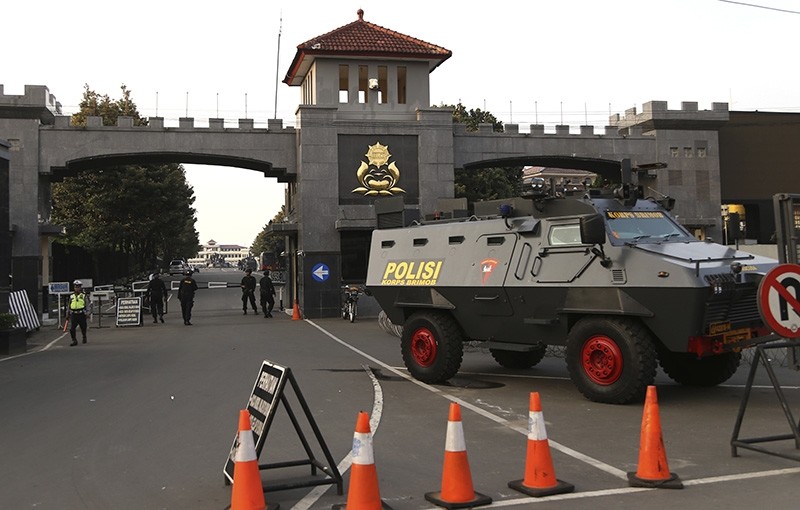 An armored vehicle is parked outside the headquarters of Mobile Brigade, an elite Indonesian police force, following a riot at the detention center inside the compound in Depok, West Java, Indonesia (AP Photo)
by Compiled from Wire Services May 09, 2018 12:00 am

Five officers and one inmate were killed in a riot at an Indonesian detention center where terrorism suspects have been held, police confirmed on Wednesday.

The Daesh terrorist group said its fighters were involved but authorities blamed the violence on a food fight.

Negotiations were underway for the release of the hostage, said national police spokesman Muhammad Iqbal.

The riot erupted in Depok, on Jakarta's southern outskirts, where four days earlier police arrested three militants they say planned to attack the headquarters and other police stations in the same town.

"The claim by ISIS was not true. This incident was just triggered by a trivial thing, about food from families," Iqbal told reporters outside the headquarters of the elite Mobile Brigade police in Depok, using another acronym for Daesh.

He said an inmate who was fatally shot after grabbing weapons and threatening officers. A counterterrorism investigator said four police officers were wounded and were being treated at a hospital.

The Coordinating Minister for Political, Legal, and Security Affairs Wiranto, who, like many Indonesians, uses only one name, said the prison riot at Mako Brimob was an "urgent incident" that needs "special attention".

"However, we have to be careful and deliberate in dealing with this. We cannot be rash because it involves national security," Wiranto explained.

Clashes at the detention center came just one day after the National Police arrested three individuals in Bogor, also in West Java, for supposedly planning a string of attacks on police stations across the province.