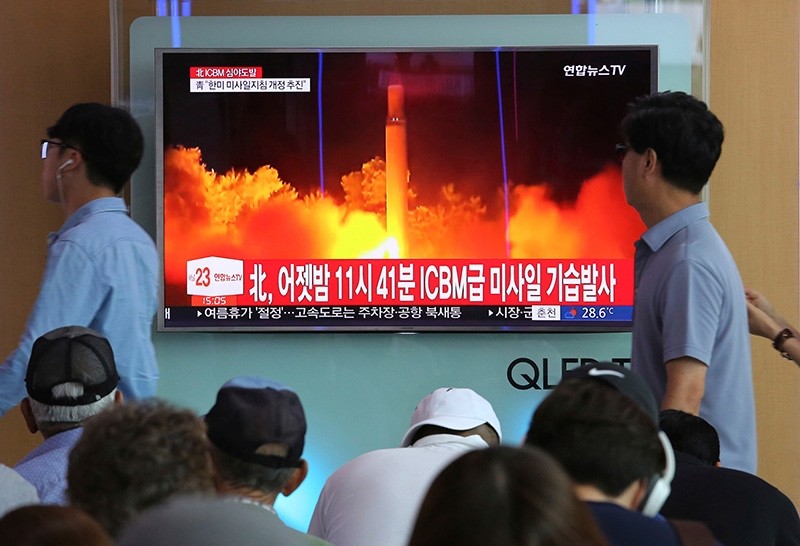 In this July 29, 2017 file photo, People watch a TV news program showing an image of North Korea's latest test launch of an intercontinental ballistic missile (ICBM), at the Seoul Railway Station in Seoul, South Korea. (AP Photo)
by May 09, 2018 12:00 am

In addition to the denuclearization of the Korean Peninsula, a three-way free trade pact is likely to be on the agenda of the three leaders' meeting, Kyodo News agency reported, citing unnamed Japanese government officials.

The Tokyo gathering comes about two weeks after inter-Korean talks between Moon and North Korean leader Kim Jong Un and ahead of the first-ever US-North Korean summit between President Donald Trump and Kim, which is expected to be held later this month or in June.

The Korean leaders held a summit meeting in the border village of Panmunjom on April 27 and agreed to pursue a set of historic goals, including a nuclear-free Korean Peninsula and an official end to the 1950-53 Korean War.

On Tuesday, Kim met President Xi Jinping in the north-eastern Chinese city of Dalian, the second meeting between the two, according to China's state news agency Xinhua.

In late March, Kim made a surprise visit to Beijing and held talks with Xi, his first known trip abroad since he assumed power in 2011.

Abe also talked to Xi over the phone on Friday ahead of Li's four-day trip to Japan, the first Chinese premier to visit the country in seven years; and Abe and Xi agreed to closely cooperate in resolving the issue of Pyongyang's nuclear weapons program.