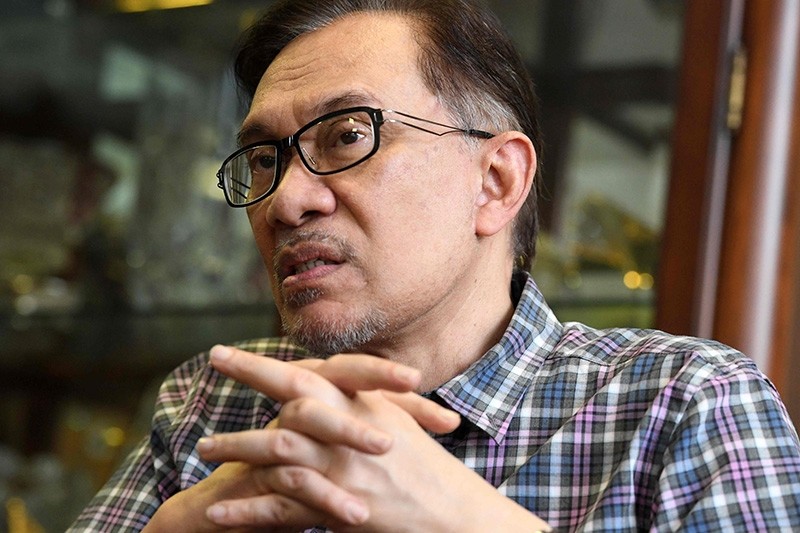 Newly released Malaysian politician Anwar Ibrahim gestures during an interview with AFP at his house in Kuala Lumpur on May 17, 2018. (AFP Photo)
by Compiled from Wire Services May 17, 2018 12:00 am

Pardoned Malaysian politician Anwar Ibrahim says decadesold affirmative action policies for the country's Malay majority must be discarded in favor of a new program to help the poor regardless of race.

In an interview with The Associated Press, the prime minister-in-waiting also says he plans to run in a by-election this year to become a member of Parliament but that he isn't in a rush to take over the top job.

The 70-year-old Anwar was sent to prison in 2015 in a case widely-believed to have been politically motivated. He was given a royal pardon Wednesday and freed from custody after the stunning electoral victory of his alliance led by former foe Mahathir Mohamad.

Anwar said Thursday that poor Malays will benefit more from merit-based policies that are transparent.

In a separate interview with French Press Agency, Anwar also said he expects ex-premier Najib Razak to be jailed over multi-billion-dollar graft claims.

Anwar predicted that Najib would likely take up the spot he had just vacated in prison.

"He will certainly be charged," he said.

Anwar declined to say how he thought Najib's case would play out, as it depended on "how he can defend himself in court."

But Anwar added: "It will be very difficult for him to escape [going to] prison."

Police searched Najib's house until early Thursday morning and also raided an upscale condominium in Kuala Lumpur occupied by his family as part of the money-laundering investigation.

The government announced Thursday that it set up a five-member committee, including a former attorney general and an adviser to Indonesia's Financial Services Authority, to handle the 1MDB case.

"Until and unless the issue of 1MDB is resolved, there will be questions that undermine public confidence in the government and its institutions," it said in a statement.

Asked about the search of Najib's house, Mahathir said Thursday that "police have enough reasons to conduct the raid" although he wasn't informed about it.

"I didn't know that they should raid at night but my instruction is very clear: I'm not going to torture people and things like that. I want people to be treated decently," he said.